The Strength and Power of Collective Rage 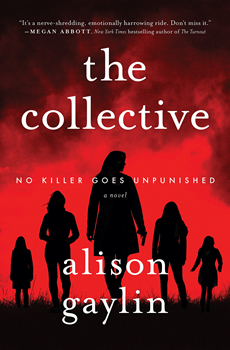 In her newest thriller, THE COLLECTIVE, bestselling author Alison Gaylin again visits the theme of family but in a darkly sinister way.

Someone killed Camille Gardner’s 15-year-old daughter, Emily, after a fraternity party. They left her in the cold to freeze to death. Before she died three days after they found her, Emily told Camille that a boy named Harris Blanchard raped and left her.

Harris belongs to a wealthy family who went on the offensive, giving an interview to Rolling Stone magazine claiming Emily falsely accused their son. Although the case went to trial, public opinion was already on Harris’s side, and the jury acquitted him.

Now, five years later, Camille still vows to get justice for her daughter.

It’s a powerful and timely story that Gaylin says stemmed from watching the news.

“I’ve read so many stories about parents who lose their children to a killer who goes unpunished,” she says. “As a mother, I always wonder how I would survive something like that—I’m not sure I would. That anguish, combined with the anger, fear, and powerlessness most of us felt at the height of the pandemic, inspired me to write THE COLLECTIVE.”

Camille has been a shadow of her former self since Emily’s murder, obsessing over the Blanchard family and how to get justice for Emily. After showing up drunk at a college function where Harris receives a humanitarian award, of all things, Camille tries to attack him. The video of her tirade goes viral.

Camille’s only friend is Luke, the man who received Emily’s heart. The only way she finds any peace is to listen to it beating in Luke’s chest. When Luke bails Camille out of jail, a woman she recognizes from the awards ceremony gives her a calling card with the name Niobe inscribed on it. When she joins their Facebook group, she realizes the members are mothers who have all lost a child to violence. Then when Camille receives an email link to a site with .onion in the address, instead of .com or .org, she learns she can only access the site on the dark web. After downloading the Tor browser, Camille joins a secret group—Ağlayan Kaya.

Everyone on the website is a mother determined to get revenge for their child’s death. The instructional page states, “Our loss has turned to rage that is permanent, strong, impenetrable. We will not forgive. We will not sleep until the unpunished feel the pain they deserve.”

The administrator labeled 0001 informs Camille that “each one of us is a working part in a great machine. The machine that we are produces justice. Each part of this great machine must 1) commit fully to our cause, and 2) tell no one about it.”

At first, Camille thinks it’s just a game for women to vent about their revenge fantasies. But after the administrator gives her assignments, she discovers the tasks she’s performed are connected to the recent deaths of accused, but unpunished, murderers. The group is all too real.

As Camille becomes further enmeshed in the murderous plots of the Kaya group, fate not only knocks on her door, but delivers another form of justice—one she’s not prepared for.

Gaylin knows that people need the support of others to get through trauma, and if we don’t have a traditional family to help us, we can create our own. She tells The Big Thrill, “Camille has lost the only family she’s ever known and is completely solitary in the world. But she finds a new family in this anonymous online group of angry grieving mothers.

“They become her family in the sense that, at least for a time, she would kill and die for them. She’s devoted to this group—it gives her direction and purpose, the way being a mother had done for her in the past. These are women whose names and faces she doesn’t know, but she bonds with them in a way that is all-consuming. They are her idea of family.”

THE COLLECTIVE revolves around the themes of justice, revenge, forgiveness, and karmic payback. Readers consider what they would do in the same situation and how far they’d go to exact punishment. The narrative also forces us to consider if anyone is innocent enough to judge someone else.

Gaylin explains why some choose to forgive while others obsess over revenge.

“I think that, for many of us, forgiving is necessary in order to survive and move on. But that’s easier said than done. The idea of someone taking away everything you love and care about and then living a happy life is pretty horrifying, and very difficult to get past. I think it’s one reason why most of us can relate to revenge stories. There’s something uniquely satisfying in watching a person get what they deserve.

“But in real life, revenge is elusive. And most times, probably not as satisfying as we expect it to be. In my experience, grief is something you never fully get over, but it’s like sticking a pin in your hand. If you laser-focus on it, the pain is unbearable. If you look away, it still hurts, but you can at least function. I think that might be why so many people find it within themselves to forgive.”

Gaylin’s not sure if it’s ever healthy for victims’ families to fantasize about “revenge justice,” even if they aren’t going to take action, but she suspects “it’s very common and very human. I know I’ve had those types of fantasies myself, as have friends of mine coping with personal tragedy and unspeakable unfairness in its aftermath. But thinking about committing a violent act and actually doing it are entirely different things.”

Even with this knowledge, Gaylin tells us there’s no place for renegade justice in our society. “We’re all human, and we’re all fallible, and it could easily backfire in the loss of innocent lives. But I can see how it would be tempting—which is why I wrote THE COLLECTIVE!”

And what does she think about karma?

“I want to believe in karma, and I’m always in awe of it when it happens,” she says. “But I don’t expect it or depend on it. There is a lot of unfairness to life. One of my least favorite sayings is, ‘Everything happens for a reason.’ No, it doesn’t. Look at all the poverty, brutality, and cruelty in this world. There’s no ‘reason’ for, say, a child to be starving. That said, I think if you do something wrong and have a conscience, karma can also come as guilt and bad feelings.”

The messages Gaylin hopes readers will take away from the book are that “there’s a fine line between justice and revenge, but they are two completely different things. Another is that large groups of like-minded people can be really scary.”

Gaylin also has some advice for other writers.

“Rewriting is your best friend. If you’re getting the same constructive criticism from people you trust, view it as a gift, take it and run with it. You can’t change who you are, but you can change what you’ve written. So stay true to the story you want to tell, but don’t assume there can’t be a better way to tell it.”

And what about Gaylin might her fans not already know?

“It’s a little embarrassing, but I’m a huge fan of reality TV. In THE COLLECTIVE, there’s a scene at a Bachelor watch party… and let’s just say I didn’t have to do any extra research to write it.”