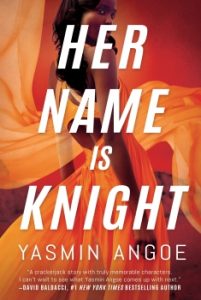 Stolen from her Ghanaian village as a child, Nena Knight has plenty of motives to kill. Now an elite assassin for a powerful business syndicate called the Tribe, she gets plenty of chances.

But while on assignment in Miami, Nena ends up saving a life, not taking one. She emerges from the experience a changed woman, finally hopeful for a life beyond rage and revenge. Tasked with killing a man she’s come to respect, Nena struggles to reconcile her loyalty to the Tribe with her new purpose.

Meanwhile, she learns a new Tribe council member is the same man who razed her village, murdered her family, and sold her into captivity. Nena can’t resist the temptation of vengeance—and she doesn’t want to. Before she can reclaim her life, she must leverage everything she was and everything she is to take him down and end the cycle of bloodshed for good.

Yasmin Angoe recently spent some time with The Big Thrill discussing her latest thriller, HER NAME IS KNIGHT:

I’d like readers to close the book feeling introduced and intrigued with a new kind of leading lady in the action thriller genre: a Ghanaian Black woman who knows how to save herself…and others she’s not being paid to kill. 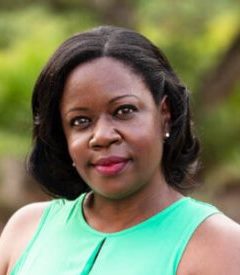 I have always loved stories with a lot of action and pulse-pounding suspense. That’s what you’d find me reading and watching. And when I decided to begin this story, I wanted to put a character I rarely see as the main character in those kinds of books, a character who I and other readers like me could see themselves in.

The biggest challenge the book presented was how to be a proper assassin because, well…I’m not one. So I wanted to make the character and story realistic but also badass in every way…and human.

I discovered that I could go places in my writing that I never thought I could go before. And it’s very freeing to now know that.

Absolutely. I wanted to break the mold on the type of character readers typically see in a book like this. I wanted my characters and stories to reflect my culture but also be something all people could find enjoyment in. My character Nena Knight can run with the best of them, all those fellas, in the flavor only she can bring.

That I wrote this book late at night, after working my 9-5 which is in education and a true drain on the brain, after making sure my kids were fed and tended to, during breaks at lunch, and all day on the weekends. And I didn’t feel a thing because the story poured out of me like a story never has before.

The authors run the gamut because I love a variety of genres. Stephen King is huge for me. I love his way of storytelling, and one day I hope to sit down and talk storytelling shop with him. James Patterson and the Alex Cross series was another because his main character is a Black man, and that was the first I’d really read a Black person in a role like that by such a prominent writer. Dan Brown, John Grisham, Eleanor Taylor Bland, Octavia Butler, L.A. Banks, Brandon Massey, Terry McMillan…the list goes on and on and grows daily, to be honest.

Hailing from Northern Virginia, Yasmin Angoe is a first-generation Ghanaian American who grew up in two cultural worlds. She works in education, is a freelance developmental editor, and received the 2020 Eleanor Taylor Bland Award for Emerging Writers of Color from Sisters in Crime. Her debut novel, HER NAME IS KNIGHT, releases November 1st, 2021 from Thomas & Mercer. She’s a proud member of SinC, Crime Writers of Color, and International Thriller Writers, to name a few. When not writing, Yasmin is either watching movies, engrossed in a new audiobook, or daydreaming about writing.