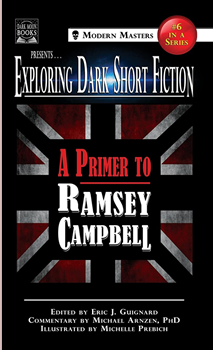 “Perhaps I was destined to believe more in knives than angels.”

To look upon the headshot included in Exploring Short Dark Fiction #6 is to see one’s favorite great uncle, the man who, at Christmas, pulls quarters out from behind squealing children’s ears and always brings the best—yet strangest—presents.

You would never know you were looking at the face of Ramsey Campbell, one of England’s leading horror writers, purveyor of the dark and uncanny. (Unless, of course, you looked at the cover of ESDF #6, read the rest of the title—A Primer to Ramsey Campbell—and put two and two together. Then it would be obvious.)

Campbell has written an astounding number of books and short stories over the last 50 years, things with killer titles like The Face That Must Die, The Doll Who Ate His Mother, Alone With the Horrors, and The Grin of the Dark. And there are so many more! More than we could list here and stay within an attention-keeping word count. Besides, with such a tempting title buffet, how would you know where to start reading?

So glad you asked.

What we have here is a primer on Ramsey Campbell. What does it include? Another great question. This primer is a selection of five short Campbell stories—plus a new one written for just this book—taken from throughout the author’s career. Also inside, like a prize at the bottom of your cereal box, there’s an interview with Campbell, a mini-autobiography sketching out Campbell’s descent into the madness of horror writing, an overview of why Campbell is so darn spooky (written by an actual professor with an actual PhD), and a short dive into each short story by aforementioned professor.

By the end of the book, you’ll be a well-primed Campbell devotee.

And, here, in this exclusive interview with The Big Thrill, are several words with the primer’s editor, Eric J. Guignard.

What got you started doing the “Exploring Dark Short Fiction” primer series?

I’ve been writing for just over 10 years and, a few years in, I realized I wanted to do more than just write—I wanted to be involved in other aspects of the industry. Eventually I started my own publishing company because I wanted to do something different: I wanted to help elevate horror fiction as a literary form. 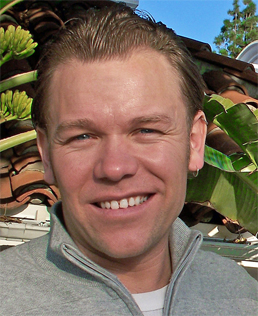 Most people, if you talk about horror authors, are familiar with the mainstream authors of Stephen King, Clive Barker, and Anne Rice, but that is a very small subset. And what most people think of horror assume it’s just what Stephen King does: a monster attacks somebody, and there’s a lot of blood, guts, and action—which I love, granted. But I also love the slow atmospheric horror that is much more soft-driven and very subtle, like in shows such as Tales From The Darkside and The Twilight Zone. These are shows that people who say they don’t like horror watch and say “Man, what a great show this is,” without really taking into consideration that they’re horror shows, that these shows are also what horror is about. Horror is about telling a good story that has dark aspects that examine fears, that examine the imagination in very speculative ways.

So taking all of that, I wanted to look at modern horror authors with diverse voices who have been around for a long time. My goal is to bring a group of great authors together in this series and have this series give a snapshot of what horror and dark fiction mean and where the genre is at this point in time.

This is book number six in the series. You picked Ramsey Campbell. Why?

When I started this project, I had a long list of authors that I wanted to work with. Now it’s a matter of picking and choosing authors with different styles of writing to represent horror. He fit right into the series as the leading voice of horror fiction for England.

Who are some of the other authors you have in this series?

I’ve been looking at authors that have diversity in their voices. I don’t want to have cookie cutter author after author. For that reason, I’ve selected authors Steve Rasnic Tem, Kaaron Warren, Nisi Shawl, and Jeffrey Ford for the first four primers. They are all unique, award-winning writers with their own distinct viewpoints within dark short fiction.

The book before this one, volume number five, is from Han Song. He is primarily a science fiction author, and he’s coming from China, but he is regarded as one of the three greatest contemporary science fiction authors of China. What’s interesting with him is that in Chinese literature, horror isn’t recognized as a genre.

So he writes horror, but it’s categorized as science fiction. And he works as a reporter of technology and he’s involved in medicine and spaceflight. So his stories tend to have a science fiction feel to them, but they also have a horror feel. He writes these stories about very dystopian societies because he’s living in Communist China and, so, he’s regularly censored. He can’t get his work published in China because the government has to sign off on whether he can be published or not. And they will regularly put a checkmark, saying this cannot be published. But if it’s sent outside of China, it can be published cautiously.

What do you hope that a person picking up this primer on Ramsey Campbell will gain from it?  What will Campbell bring to them?

Ramsey Campbell has been writing and publishing in major mainstream global markets for over half a century. He represents a history of weird fiction. He actually has ties going back to H.P. Lovecraft because he had a longstanding correspondence with August Derleth, who is solely responsible for republishing Lovecraft’s work. Campbell has relationships and tie-ins to all of the big-name horror and science fiction authors going back to the 1930s.

Campbell has been able to develop his own style of this very subtle, creeping dread, the kind of stories that could almost take place in your backyard. It just has something that’s been turned slightly askew. And what’s been turned slightly askew, a lot of times, it depends on your perspective. You know, what is this character’s viewpoint? How are they being haunted by this story? And then Campbell makes that fear our own.

I think out of all of the authors I’ve published in the series, Campbell most represents what this series is about. Because he’s tied into the history of weird fiction and he has such a broad reach and he’s been involved in novelizations of movies and he’s been involved in science fiction writing and mystery writing and literary writing. You can point to him and say this is how a writer is able to transform themselves over the years but still be able to tell a compelling story and still be able to keep an active, interested audience.

The next book in the series, number seven, is a primer on Gemma Files. Why did you pick her? What are we looking for in that book in regard to broadening our view of dark fiction?

I have long read and respected Gemma Files. She’s from Canada and has a kind of a Canadian sensibility in her writing. Files is also involved in the erotica scene, so she has a ton of hardcore, old-school, gothic tones in her writing. If you’re familiar with Poppy Z. Brite, I would place Gemma Files as a contemporary of Brite in the way that she writes because she has these very sexual vibes with a punk rock and Doc Martens feel but with Jane Austen in the background.

Where Ramsey Campbell tends to write shorter stories that are more subtle, quiet, and ghostly—almost like Henry James—it’s hard to find a short story from Files because her short stories are novelettes, really. They all have these elaborate plots and they’re very much in your face with sex, violence, and gore. She’ll have a bisexual cowboy western series and then she’ll have stories of sea captains having relations with mermaids and sea monsters. Then she’ll have stories that are appropriate for the young adult genre and rewritten fairy tales that touch upon modern social issues. I’m really excited to be able to work with Gemma. She’s just has a phenomenally strong voice with diverse and feminist views.

Eric J. Guignard is a writer and editor of dark and speculative fiction operating from the shadowy outskirts of Los Angeles, where he also runs the small press Dark Moon Books. He’s twice won the Bram Stoker Award, been a finalist for the International Thriller Writers Award, and is a multi-nominee of the Pushcart Prize.

He has over one hundred stories and non-fiction author credits appearing in publications around the world. As editor, Eric’s published multiple fiction anthologies, including his most recent, Pop the Clutch: Thrilling Tales of Rockabilly, Monsters, and Hot Rod Horror; and A World of Horror, a showcase of international horror short fiction.