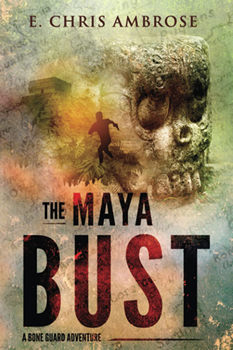 E. Chris Ambrose’s fourth book in the Bone Guard series, THE MAYA BUST, is a compelling adventure set in an exotic locale. Against a vivid backdrop of scenery that gives a real sense of place without slowing down the plot, a diverse cast of characters battles vicious foes while attempting to slay their own demons.

Grant Casey is a seasoned professional who helps people in their time of need. When asked by the ex-wife of his former commanding officer to find their daughter, who has vanished, Casey’s loyalties are tested. The mother of Lexi, the missing girl, has demanded that he keep the mission secret, especially from Lexi’s estranged father. While others attempt to locate and rescue her, Lexi uses the fact that she’s deaf and people underestimate her, along with skills her father taught her at a young age, to survive until help arrives.

Still, it will take all of Casey’s expertise, and a lot of luck, if he is to rescue Lexi from the drug smugglers holding her. Their leader, Raxha Castillo, wants to claim her rightful place in the aftermath of her drug lord father’s death years before. To do so, she needs credibility and cash. She can obtain both if Lexi can be traded for the treasure map Raxha’s father left behind on an ancient artifact.

Ambrose’s love of archeology comes through in this series installment, and she skillfully interweaves Mayan history and folklore with contemporary issues. She shares further insight into THE MAYA BUST in this exclusive interview with The Big Thrill.

Aside from other authors, who or what has had the greatest influence on your writing?

Definitely a fascination with archaeology. Each artifact or site opens a thousand questions about who lived there, who made that, from what, and for what purpose. Material culture of the past opens the doors to a thousand mysteries.

When did your desire to become an author start?

The first stories I wrote were in the first grade: Andy rolled a rock down a hill. Amy wanted to roll rocks, too. They rolled rocks together.

Hardly a blockbuster plot, but there’s a beginning, middle, end, and some kind of character development!

Your characters are well developed, multi-faceted, and unique in their own right. To obtain such a well-written novel, do you outline—or what other tricks might you be willing to share?

Thanks! I do a lot of pre-writing before the actual drafting of the book. I research the area I’m writing into, looking for its unique history and geography, keeping track of the cool stuff I find out. As I come up with ideas that might be plot-worthy, I’m always thinking about how this will challenge my characters, then how I can make it worse: harder for them to confront their conflicts and deal with any consequences that arise from their choices. One of the fun things about writing series is that those consequences may return several volumes later.

One of the characters has a jaguar, Chica, as a pet. Is there a special reason that you chose that specific animal?

Jaguars are sacred to the Mayan people and carry a lot of symbolic weight, especially as emissaries from the gods. But the gods are so often capricious, and may have an agenda that’s bigger than man.

I understand that beta readers were helpful in making Lexi “well rounded,” but what was your inspiration for a character who is deaf? Were there any specific challenges to writing Lexi’s character?

Lexi’s character emerged from two main inspirations. One was the revelation in a prior volume that Gooney, the irascible foil for my protagonist, was fluent in ASL, so it made sense that he had a deaf family member. I’d had the idea a while back about someone getting in trouble with a cartel in South America, so involving his estranged family brought in lots of additional conflicts for me to play with. When I started researching the Maya and learned about the Meemul Tziij, the Mayan sign language that allowed tribes speaking different languages to communicate, it created some additional resonance. One of the things I learned more about is the degree to which the body as a whole, including expression and posture, creates the meaning in ASL. Non-ASL speakers tend to focus on the hands, but the language requires much more physicality.

“Bone Guard” is a logical and clever name for an organization that helps people. How did you come up with it?

Part of my pre-writing for a book is often lists of dramatic or resonant words related to the themes. In this case, both parts of the name carry some weight for an archaeological thriller series, especially given the ex-military heroes who populate the group.

What suggestions do you have to help aspiring authors write and publish their first book?

The most important thing about your first novel is finishing it. Many, many people think they have a book in them. Many will begin (and then often start talking about publishing, agents, editors, and Hollywood before they’ve got 10 chapters). Not many people finish.  Sometimes, they get excited about some new idea; sometimes, they just lose steam. You can learn a lot from reading craft books, attending workshops, and analyzing the work of authors you admire, but only completing an entire plot will show you first that you can do it, and also how.

While conducting research for THE MAYA BUST, did you learn anything that surprised you?

I discovered that there are companies who will ship you whole cacao pods. A friend who did this allowed me to come over and join him to split one open, try the seeds and pulp, bring some home, and make my own chocolate. Nothing beats hands-on research! Cacao pods are very rough and thick. Definitely gives me a greater appreciation for those lovely artisanal chocolatiers. This is the first book I’ve written that has an official chocolate bar, but probably won’t be the last.

What do you see as the advantages and disadvantages of the publishing route you chose?

The good news and bad news about indie publishing is that you’re in charge of the whole process. You can make all the choices—but also, you have to make all the choices. You get all the rewards, but you must also take all of the risks, in terms of money, time, and emotional energy. You don’t have the built-in squad that a publishing house delivers. That does mean full title and cover control—a definite plus! It helps to seek out professionals to handle the aspects of the process that are outside your wheelhouse.

E. Chris Ambrose is the author of the Bone Guard archaeological thrillers as well as The Dark Apostle historical fantasy series about medieval surgery, among other things. In the process of researching her books, E.C. learned how to hunt with a falcon, clear a building of possible assailants, and pull traction on a broken limb. A former adventure guide, E.C. lives and writes in the Granite State.