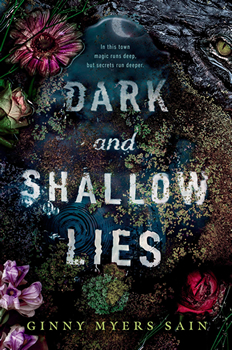 “How do you keep a secret in a town full of psychics?” I ask him, and light flashes bright inside those ice-fire eyes.

Two hours south of New Orleans and a boat ride away is the tiny bayou town of La Cachette, Louisiana. Psychic capital of the world, home to 106 gifted souls and one oversized alligator named Willie Nelson. A great place to visit, have your palm read, get your fortune told, and buy a few crystals to help spice up your love life. But you don’t want to stay—for a town of so few people, there’s a surprisingly high murder rate.

Seventeen-year-old Grey has returned to La Cachette on her summer break, but she’s not there to catch up with her childhood friends. While she was gone, her best friend Elora went missing, and no one in this town full of psychics seems to know what happened to her or why. Grey is determined to find answers, but as is often the case, the price of the truth may be far higher than she expected.

That’s the premise of DARK AND SHALLOW LIES by Ginny Myers Sain—and it’s a great one.

But what you don’t get from the premise is that the author is a genius at describing things we’ve all heard described the same way over and over and over (and over) again… in a totally new way, but never in a way so outlandish or so dramatic as to make you stop and squint at the page. Lines like:

“Spending the summer in La Cachette is like living inside someone’s mouth for three months out of the year.”

What you also don’t get from the premise is the sheer poetry of Myers Sain’s text. Sharp, often staccato sentences with an occasional meander make up Grey’s interior monologue, creating a character voice that is distinct and surprisingly adult but often haunted and increasingly confused as the lies buried in the heart of La Cachette begin to surface. 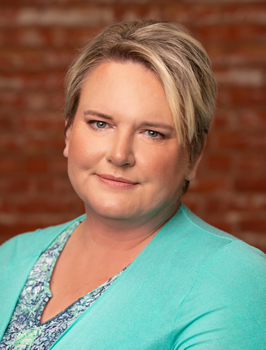 This gradual resurfacing takes place as Grey talks with the residents of La Cachette—people who she has known all of her life, other children who she grew up alongside. Through these conversations, delicately peppered with accents from the bayou, Grey slowly, achingly comes to recognize that the town she grew up in has been overrun by secrets, by thick roots of lies and half-truths, and by sins that are so unbearable that even the sinners cannot admit to themselves their misdeeds.

DARK AND SHALLOW LIES is a slow, twisting burn that will plunge you heartfirst into the grief of a girl who has lost her best friend, bespell you with otherworldly visions on dark bayou nights, then haunt you with heart-breaking revelations of what happens when a town with too many secrets breaks wide open.

In this interview with The Big Thrill, Myers Sain takes us deeper into her chilling new release.

Of all the psychic abilities that feature in your book, which is your favorite?

I think Evie has the most interesting gift. She’s clairaudient, so she hears messages. Grey describes it like a radio in her head. Voices. Bits of music. I was just really captivated by that idea. Usually we think of psychics as seeing visions. The idea that someone might hear those disembodied whispers from the other side just felt really eerie to me.

If you could go back in time and give advice to yourself as you began writing this book, what would you tell yourself?

Cut that subplot before you waste time writing it! There was a pretty big subplot that ended up being cut from the book before I even started querying it. It was taking up too much space on the page without really adding anything to the story. So it had to go. But that was painful because I’d spent a lot of time writing it into the story.

If you were living in La Cachette, what psychic services would you sell to tourists, and what would be your performer name?

Oh! That’s a fun one! Since I’m a writer, I’m going to go with “automatic writing.” It’s also called psychography, and it’s a psychic ability that allows a person to produce written words without consciously writing. They’re supposed to be messages from the dead, but it sounds like a very handy ability for a writer! I’d probably call myself Madame December, because that’s the month I was born, and it sounds sort of mysterious.

As a young adult book, what do you hope a teenaged reader will take away from this story?

I hope they’ll take away some questions. I don’t think it’s a story that offers any answers, and I think that’s okay, as long as it leaves readers with some good questions. How do we deal with grief? What does it mean to really love someone and then lose them? Where does that love go? Are we better than the worst thing we’ve ever done? What damage do secrets do? How well can we really ever know anyone else? Those are just a couple of things that I think are worth thinking about.

What was your favorite thing about writing this book? Your least favorite?

My favorite thing was just discovering this world. I love the bayou. It’s a setting that’s always been close to my heart. I spend a lot of time in Florida and in Louisiana, and the swamp is just a landscape that has always sort of called to me. So that was fun. And creating this strange little town filled with characters that I just came to really love, all of that was so much fun. The hardest part was just finding the willpower to get it finished. To get the words on paper. It’s hard to sit down and work every day on a project when you don’t know if it will ever be published. You just have to keep plugging away at it, and that takes a lot of hope.

What was the hardest part of getting this book published?

For me, it was querying agents. That took a while. Agents get so many queries, and it’s just very hard to get anyone’s attention as a slush pile submission. Once I had one agent interested, though, others sat up and took notice. Then, once I settled on an agent, things went very fast as far as submitting to editors, an auction, and now publication. All of that happened in 10 months. But finding an agent takes time. So if you’re out there in the querying trenches, don’t give up!

Ginny Myers Sain lives in Tulsa, Oklahoma, and has spent the past twenty years working closely with teens as a director and acting instructor in a program designed for high school students seriously intent on pursuing a career in the professional theatre. Having grown up in deeply rural America, she is interested in telling stories about resilient kids who come of age in remote settings. DARK AND SHALLOW LIES is her debut novel.