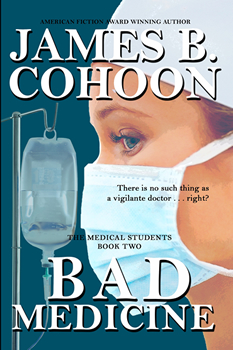 From busy hospitals in San Diego to the barren deserts of Arizona, this tension-filled thriller, the second installment of the Medical Students series, follows the life and death challenges, the surprising twists and turns, and the ethical dilemmas of two young doctors in their quest to rid the profession of bad doctors who practice bad medicine resulting in bad outcomes.

Book One, Do No Harm, introduced Torrey Jamison and Matthew Preston. Torrey, with her genius IQ, gained acceptance to Stanford Medical School to pursue her dream of becoming a pediatric neurosurgeon in honor of her little sister, Leia, who died of brain cancer. At Stanford, she met her future husband, Matthew, who pursued medical school for the sole purpose of becoming a prison doctor in order to gain access to—and kill—his father’s murderer who was incarcerated in San Quentin. As their relationship deepened, Torrey was forced to confront the potential value and moral ambiguity of vigilantism.

In the page-turning, stand-alone suspense sequel BAD MEDICINE, newlyweds Torrey and Matthew have graduated from medical school and are now new doctors at Kaiser Hospital in San Diego. While there, they learn of a friend’s young niece, who has fallen victim to a doctor who is running a phony cancer treatment center. Putting their careers and marriage in jeopardy, Dr. Jamison and Dr. Preston agree to help their friend’s family seek the ultimate revenge.

The Big Thrill caught up with award-winning author James B. Cohoon for a quick chat about Book Two in his Medical Students series, BAD MEDICINE:

Being a medical resident is a long, hard road. The fictional doctors in BAD MEDICINE somehow have the time to plot and carry out intricate vigilante killings, but in the real world, they are overworked and underpaid, with barely enough time to eat, sleep, and shower. And despite the fact that there are bad doctors running around in BAD MEDICINE, most are wonderful and selfless.

I learned from the 1000+ reviews of Do No Harm that readers were most enamored with the relationship between the main characters and with their trials in medical school. Writing the sequel, BAD MEDICINE, presented the challenge, and the opportunity, to more fully explore the personal dynamics between the doctor protagonists as well as the daily chaos in their professional hospital lives. And the overarching challenge throughout was to balance the relative darkness and moral ambiguity of vigilante doctors with the goal of a light, entertaining read. I hope that the goal was achieved.

I was diagnosed with an aggressive cancer when I was about halfway through writing the book. My wife and I moved to San Diego for two months of proton therapy treatment. I wrote every day after treatment. We rented a place in La Jolla, where this book is set. Much of the descriptions in the book are taken from our exploration of the town and surrounding area. Although the book is a work of fiction, the beauty of La Jolla is real.

James Cohoon was the president of a Los Angeles-based law firm until his early retirement in 2014. As a civil litigation lawyer for over 30 years, he frequently lectured and published legal articles. His daily work included writing legal briefs for judges and other lawyers which were, in essence, “stories” to fit the facts of his hundreds of legal cases. He resides in California with his high school sweetheart, Rozanne, with whom he has two children—Kristin, a lawyer who is presently a stay-at-home mother, and Travis, a doctor who is a cardiology fellow.

Besides playing with his grandsons—Everett and Beckett—James enjoys sighting orca whales from the San Juan Islands shoreline, playing bridge, and mowing the lawn.