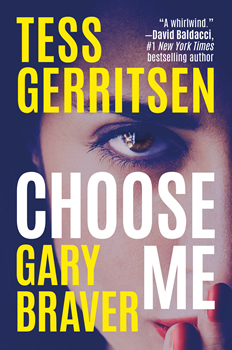 Though Tess Gerritsen and Gary Braver have been friends and writing colleagues for more than 25 years, it wasn’t until the two chatted at a Christmas party a few years back that they decided to collaborate on a novel.

The result is CHOOSE ME, a sexy murder mystery about a reckless affair between a professor and his student—and the dangerous (and deadly) consequences of their secret.

For young professor Jack Dorian, Taryn is the ultimate fantasy—young, beautiful, and willing to provide the intimacy missing in Jack’s marriage. He doesn’t want to lose his wife, but she’s successful and busy. Too busy for him.

Unfortunately, not long after the affair starts, Taryn is killed, and Jack’s greatest fantasy quickly turns to his greatest nightmare—not only is his world starting to unravel, he’s the prime suspect in Taryn’s murder.

Braver’s task, Gerritsen says, was to drag Jack through the wringer, and Braver absolutely delivers. 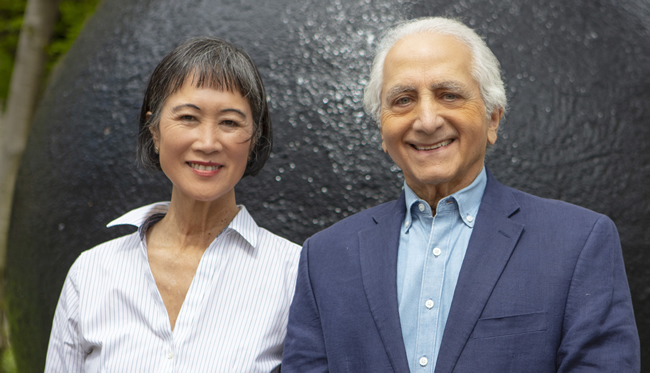 “Gary had a tough job,” Gerritsen says. “He had to take this professor, who had done a terrible thing—had betrayed his wife, had crossed a line—and make him likeable. It would be so easy to make the man the villain in this story, especially since his lover ends up dead.”

At first blush, the death looks like suicide. But when Frankie Loomis shows up on the scene—a detective with college-aged children of her own—she knows something doesn’t quite feel right, and she works tirelessly to catch the killer.

Jack didn’t murder Taryn, of course—this is a thriller mystery, after all, and that would be far too obvious—but by the end of the book, Jack’s guilt is palpable. Not for killing Taryn, but for everything that led up to it.

“I wanted him to be contrite,” says Braver, who in addition to publishing eight novels (three under his real name, Gary Goshgarian), is an English professor at Northeastern University in Boston. “Without that, he would have been a hardcore hateful person.”

The fact that he isn’t is testament to not only the co-authors’ impressive combined skill, but also the balanced approach they took to plotting, characterization, and writing.

For Gerritsen, the book was an opportunity to further explore the differences between men and women when it comes to sexual attraction and relationships. 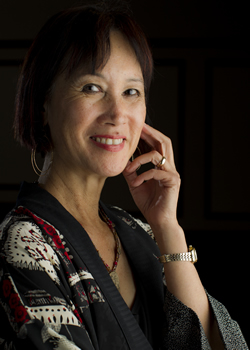 “As women, I think we have an idealized version of what men think about us,” she says. “We think that men are attracted to our sparkling minds and our wit and our abilities and our styles. But I was curious about what a man thinks when he first meets an attractive woman for the first time. Where do his eyes go? Where does his mind go?”

Not surprisingly, Gerritsen confirmed that the man’s perspective, at least in the character of Jack, was more physical, more sexualized than a woman’s. But she also learned a bit more about how a relationship can be viewed very differently by the two genders.

Braver also learned a lot. While they both passed material through their respective spouses for an “authenticity check,” Braver quickly realized that some of the vocabulary needed to be toned down so as not to offend their key readership group—women.

“Men and women do have different instincts,” he says. “I knew very clearly what our protagonist wanted. But I didn’t want him to be a womanizer, or irresponsibly having sex with all these attractive students. ”

Even still, the authors acknowledge that writing the book was risky.

“In a way it was dangerous because we are treading on sensitive ground and stirring up people because we dealt with this topic,” Gerritsen says. “But our goal from the beginning was to acknowledge that this happens. We wanted to look at human beings—who are never 100 percent perfect nor 100 percent bad—and understand why they make mistakes.”

“We really telescoped it out,” Braver says. “We examined from moment to moment what the consequences of their actions would be.”

The content will still make some readers uncomfortable, but Gerritsen says they couldn’t let that stop them from telling the story. 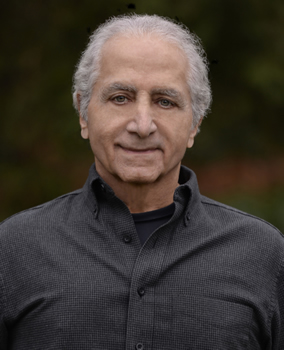 “It’s a bad place to start with being afraid of what you write, or being afraid that what you write is going to destroy your career,” she says. “Yes, we should try to be sensitive and take into account our characters’ humanity, but to be afraid that you might get something wrong and have that stop you? I can’t imagine a worst case of writer’s block.”

Indeed, there are enough publishing obstacles and follies without that added pressure. And that’s something Braver knows all too well. Fans of his previous work know that it’s been a few years since he’s published a book—Tunnel Vision came out in 2010. It wasn’t writer’s block that created the gap, but rather an unfortunate incident with his award-winning novel Flashback.

“I was at Barnes and Noble, about to do a signing, and when I opened the book, there was a marriage photo inside,” he says. “It didn’t have anything to do with my book. The first 44 pages or so of The Glass Castle by Jeannette Walls had inadvertently been stitched into my novel.”

A correction was made and the book re-released a few months later, but by that time, momentum was gone, his publisher terminated his contract, and Braver was unable to find placement for the two books he’d written.

Thankfully, CHOOSE ME helped him get back in the saddle. He’s currently working on a revenge thriller called Served Cold, and plans to shop the two books he wrote during his publishing hiatus.

Gerritsen also has a number of projects in the pipeline, including a new Rizzoli and Isles book slated for release next year, and she’s collaborating with a writer on some teleplays.

So does that mean the two won’t be working together on another novel? Probably not, they admit.

“It’s been fun,” Gerritsen says. “Challenging, but fun. And the book we ended up with is wonderful. We did what we set out to do—and that’s tell a good story.”