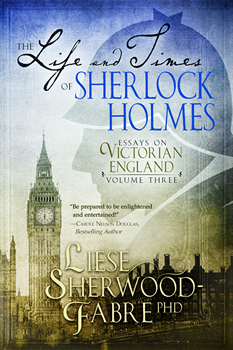 Liese Sherwood-Fabre’s first memory of Sherlock Holmes was watching old black and white Basil Rathbone movies after school. As he’s done for more than a century—even inspiring cartoon characters to solve mysteries while sporting deerstalkers—Sherlock made himself unforgettable.

Several years ago, while on the treadmill (where she says she gets all her best ideas), she found herself wondering how Sherlock Holmes became . . . well, Sherlock Holmes. Sir Arthur Conan Doyle had provided little in the way of his iconic character’s history or family prior to meeting Watson. “Perfect,” Sherwood-Fabre says, “if one was interested in writing an origin story.”

Which, of course, she was.

In a Killer Nashville blog post, Sherwood-Fabre explained the evolution of that story. “Both Sherlock and Mycroft had exceptional intellectual abilities, but someone had to nurture these traits. I chose their mother to be both teacher and mentor in such areas. During the Victorian period, the mother was in charge of the household, including the children’s education. At the same time, they led very restricted lives. I developed a woman with a mind as keen as her sons’, but without the outlet the boys were offered.”

The boys’ father played a different role. Because Sherlock’s ancestors were country squires, who often served as local magistrates, his father provided an introduction into the law and criminal activity. “Given such an environment, the rest was—fictional—history,” she says.

Clearly, she’d found a story that resonated with readers. Her next step seemed obvious: a book of essays on life in Sherlock’s time. That book became a series, in which her latest installment, THE LIFE AND TIME OF SHERLOCK HOLMES: ESSAYS ON VICTORIAN ENGLAND, is the third. From a glimpse into the creation of the Stradivarius violin to the clothing and fashions of the era to the use of brandy for medicinal purposes, these 25 essays give readers a deeper look into what Victorian life was like in Sherlock’s time.

Asked what led her to write THE LIFE AND TIMES OF SHERLOCK HOLMES, Sherwood-Fabre says, “As a trained social scientist, it evolved naturally. Writing historical fiction requires a lot of research, which, after a while, I thought would be nice to share with others. At first, I provided them to Sherlock Holmes societies for their newsletters. After a while, I thought other Sherlock or history fans might also be interested as well—so I published them in book form.”

In this The Big Thrill interview, Sherwood-Fabre shares some of her thoughts on the great detective and her body of work about him.

Let’s start with your writing journey. What can you tell us about what set you on your path toward writing as a career?

I’ve always been an avid reader. Along the way, I thought, “I could do this,” and I tried my hand at penning stories, starting in junior high. The first one I submitted to a sci-fi magazine was promptly rejected, but rather than being discouraged, I continued with the goal of getting published. I lived and worked in Russia from 1994-1999 and came across an article about how Iran was recruiting Russian scientists to work in their bioweapons and nuclear facilities. That became the inspiration for my published thriller Saving Hope.

You’ve chosen to write about one of the most iconic characters in Western literature. What do you think is the secret of Sherlock’s timeless appeal?

Sherlock Holmes presented a new approach to crime-solving: the application of science and logic to find the solution. When presented with the facts, the reader can figure out the answer and even race against Sherlock to solve it.

Your research into both the details of Victorian life and their connection to the Sherlock Holmes tales is extensive. What kind of research did you have to do for this book, and what were your most useful sources?

I’ve been writing these essays now for six years and have amassed a rather extensive collection of research books. I have one titled Victorian Britain: An Encyclopedia, others on everyday Victorian life, and others on specific subjects (like the criminal underworld). When all else fails, there’s the internet.

What’s the most interesting or unusual thing you learned or did while doing research for this series?

I think the most interesting thing is the shift in women’s freedom over the Victorian period and some of the instruments that led to the change. I had no idea the bicycle represented such a great leap forward in their personal mobility, and how the typewriter opened a whole new profession.

This is your third book of essays on Victorian England. What can you tell us about the other two? Do you plan to do more?

These books represent six years of essays. The first volume begins with the most elementary topics—What is a country squire? and What type of doctor was Watson (surgeon or MD—or both)? I’m already into year seven’s essays, so I suppose there are more in the future.

The illustrations are lovely. What’s the story behind them?

When I would send the essays to various newsletters, I got requests for illustrations to accompany them. I purchased a plan for royalty-free photos and can usually find something that addresses the topic. I think the hardest was the one for diabetes. I didn’t think a pancreas or kidney was appropriate. They are made to look “vintage” for the book.

In writing your mysteries about Sherlock’s pre-Conan Doyle cases, how did you go about constructing a protagonist who is both original yet clearly destined to grow into the character readers know from Conan Doyle’s original series? What new insights does your series bring to the character?

In one story, Sherlock tells Watson he developed his “methods” while at university, but there is no explanation as to his motivation to do so. Why would he choose to apply science to solve crimes instead of in some other pursuit? An origin story explains, in part, the motivation for the older character’s actions and personality. I chose having his mother accused of murder for Sherlock’s original motivation.

Before we go, what advice would you give to aspiring and pre-published writers?

When I was working on my doctorate, I went to a workshop on writing your dissertation one evening. The most important thing I learned that night was that you can’t edit a blank page. Getting something down is the first step to finishing. And that’s what I would tell any aspiring writer: Keep writing and finish the project. It doesn’t have to be perfect—just done. Editing is for making it great.

Award-winning author Dr. Liese Sherwood-Fabre doesn’t remember a time she didn’t know of Sherlock Holmes—be it the old Basil Rathbone movies, Tom and Jerry in deerstalker hats, or the original Conan Doyle tales. During her 30-plus years as a federal employee, Dr. Sherwood-Fabre worked and lived in various countries, including Mexico and Russia, finding inspiration for stories based on events taking place around her. She garnered a prestigious Pushcart nomination for a short story inspired by her experiences in Mexico, and having lived through the tumultuous years of Russia’s budding democracy, her first published novel, Saving Hope, centered around an unemployed Russian microbiologist who must choose between saving her daughter’s life or working with a former KGB agent to stop the sale of bioweapons to Iran. After returning to the States, Dr. Sherwood-Fabre revived her early interest in Sherlock Holmes and the Victorian period. For the past six years, she has shared her knowledge with other Sherlockians by contributing regularly to several society newsletters, as well as the prestigious Baker Street Journal and Canadian Holmes publications. Her Holmes origin series The Early Case Files of Sherlock Holmes launched in June 2020 with The Adventure of the Murdered Midwife, followed in August by The Adventure of the Murdered Gypsy. Look for The Adventure of the Deceased Scholar early in 2021.