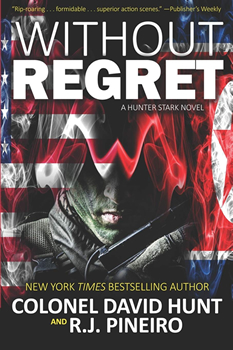 WITHOUT REGRET is the third book in the Hunter Stark series by Col. David Hunt and R.J. Pineiro. This time around, the world is pushed to the brink of World War III when North Korean President Kim Jong-un is assassinated during an official visit to the United States. On the surface, it appears that the perpetrators are Japanese agents operating on US soil. However, as the US Seventh Fleet comes under attack in the Sea of Japan, American President Laura Vaccaro orders Col. Hunter Stark and FBI Special Agent Monica Cruz to unearth the proof she needs to exonerate America and Japan before North Korea and its allies—China and Russia—escalate the conflict into an all-out shooting war.

The Big Thrill caught up with one of the co-authors, R.J. Pineiro, who took a few minutes to answer our questions about the latest installment of the Hunter Stark series.

How did the idea for this book originate?

Col. Hunt always wanted to do a novel involving North Korea since he worked in the DMZ—the Demilitarized Zone separating the two Koreas—and he also worked security during the Seoul Olympics. We were able to weave those personal experiences into the book. But we didn’t want it to be just another North Korea doomsday tale. In our story, Kim Jong-un is actually invited to the White House by President Vaccaro, who has gone a long way to build a relationship with the North Korean dictator. Unfortunately, he is assassinated during a stopover in Dallas, creating an original, exciting, and also scary scenario. North Korea fires off missiles toward Japan for the hell of it. Could you imagine what the reaction would be if its leader was assassinated? Welcome to WITHOUT REGRET.

Since Col. Hunt worked in the region, he was quite familiar with its military forces, customs, etc., so we were able to inject quite a bit of realism into the story. We did spend a considerable amount of time researching naval warfare since Col. Hunt is an Army guy. But I also have quite a bit of experience writing and researching naval battles, especially aerial combat, so we were able to complement our skills. 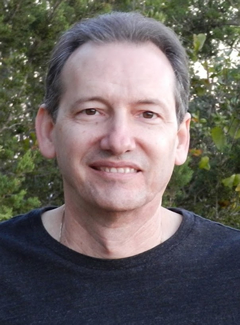 The target selection of Kim Jong-un must be a story of its own. Please tell us about it.

We want each book in the series to push the envelope and be a departure from prior titles to keep readers fully engaged, so after having ISIS blow up nukes in America in Without Mercy and plunging the reader into a 2006 war story in Afghanistan in Without Fear, we were looking for something new and fresh. WITHOUT REGRET takes place a year after the first book, as America is recovering from the destruction in New York City. We toyed around with storylines involving North Korea given Col. Hunt’s background there, and we started to plot. . .

The protagonist of the series, Hunter Stark, has an interesting story arc. Tell us about his journey across the three books.

Col. Hunter Stark is patterned after Col. David Hunt, who spent 30 years in the US Special Forces before becoming a government contractor leading a small team very much like the one commanded by Hunter Stark in the series. In fact, Stark’s teammates are patterned after Col. Hunt’s contractor team. His life and background is injected into the storyline as we see him grow from book to book, including a small bit of love drama.

Stark is the leader of President Vaccaro’s covert team. A former US Army Special Forces colonel, Stark is very bright but also very aggressive, with anger issues, a scarred forehead, takes meds to temper his PTSD, and is scored from his soul to his bones from the brutality he has given and received.

Like so many warriors who think they can do without their meds, Stark stopped taking them for a period, costing him his marriage.

He is flawed, human, and even scared, but he lives and dies by General George S. Patton’s memorable quote: Courage is fear holding on a minute longer.

And while Stark loves his country, his ultimate loyalty is to the brotherhood. He’d rather die than let his teammates down.

The book features several POVs. Is it hard to keep them separate? And how hard it is to create them?

The Hunter Stark series, as well as some of my other books, follow the multiple parallel storylines and POVs that Tom Clancy pioneered in the 1980s when he created the “techno-thriller” subgenre. I grew up with those books, and when it came time to start writing, I naturally leaned in that direction.

Having said that, it does take a significant amount of thought and effort to create those multiple POVs and bounce back and forth between them to craft the tension and drama in the storyline. We always ask ourselves: who are the most interesting characters to show the reader the developing story? Then we trim it down to four or five protagonists and two or three antagonists. As an aside, we actually spend more time creating and developing our antagonists than we do our protagonists. We believe that a good thriller must have great antagonists that are multidimensional, or the story will not work irrespective of how great the protagonists are.

How is the process of co-authoring with Col. David Hunt?

After three books, we’ve gotten into a smooth rhythm. We plot together, then divide up the chapters and start writing them. Then we share what we have written and rip into each other’s work. That process creates a unified voice, where the reader can’t really tell who wrote what. The end product is all one clean and swift (and exciting) tale from start to finish.

You write different series and various standalone books—do they happen within the same universe? Is there an opportunity for cameos?

Good question. I have another series featuring a former Navy SEAL, Commander Lawson Pacheco. But unlike the Hunter Stark “Clancyesque” series, the Law Pacheco series is suspense-mystery written through a single POV and in the first person and present tense, so the reader learns what’s happening at the same time as our main protagonist.

The universes of those two series could one day merge, or at a minimum have a cameo, but probably not just yet.

Colonel David Hunt has spent almost 30 years fighting our nation’s wars, from Vietnam to Bosnia. He is a New York Times bestselling author and has been a TV military analyst for 10 years. Hunt lives in Maine with his family.

R.J. Pineiro is a 30-year veteran of the computer industry as well as the author of many internationally acclaimed novels, including Avenue of Regrets, Chilling Effect, and Highest Law. Pineiro makes his home in central Texas.

To learn more about R.J., please visit his website.