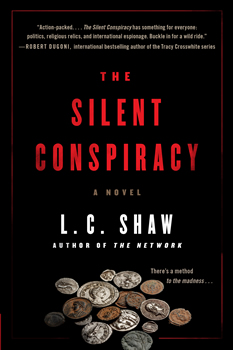 Writing The Network didn’t exactly come quickly for L. C. Shaw—last year’s thrilling debut had been rolling around in her head for years before she finally decided to extract it. But with this month’s page-turning follow-up—THE SILENT CONSPIRACY—Shaw says she had to navigate a few unique challenges, the most pressing being where next to take her series characters Jack Logan and Taylor Parks.

She’d left the door open for a Book 2, of course, but it took a bit of time to hash out the details.

“There were so many possibilities that at first it was daunting,” says Shaw, who also writes with her sister, Valerie, under the bestselling pen name of Liv Constantine. “Also being used to collaborating with Valerie, going back to writing a book solo left me without a brainstorming partner. And of course, I couldn’t email my sister and ask her to finish a scene like I do with our ‘Liv’ books.”

The Network took readers on a globetrotting thrill ride from the black halls of Congress to the high-rise offices of Madison Avenue to a remote island in Greece. That book was more politically charged. THE SILENT CONSPIRACY has more of a religious angle.

Jack and Taylor’s story picks up two years after the pulse-pounding climax of The Network. The two have settled into married life with their newborn son, Evan, and Damon Cross is thankfully dead, along with his evil plan for society.

When a string of suicides attracts Jack’s attention, he and Taylor are drawn into another mystery, one that involves the hunt for ancient coins from the betrayal of Jesus that are rumored to drive people mad. There are, as expected, many shocking twists and turns along the way, but perhaps none as deadly as the reveal that Cross is still very much alive—and he’s nowhere near done with Jack and Taylor.

“Originally there were fictitious religious relics,” Shaw says. “When working with my editor at the time, she suggested we find actual relics. The coins that Judas accepted for betraying Jesus seemed a natural fit for the story. As I did more research into their history, I realized they were the right choice. I was surprised to learn about all the different hands the coins fell into and the fact that no one really knows what happened to them.”

It’s a brilliant concept, which Shaw admits was fostered both by her fascination with human psychology and her desire to bring real-world issues into her work. In both The Network and THE SILENT CONSPIRACY, Jack and Taylor are dealing with massive outside forces that not only pose personal danger, but also a threat to society as a whole.

“As they’re forced to deal with the chaos surrounding them, they’re forced to look inside and deal with the same interpersonal and familial issues facing all of us,” Shaw says. “I like to bring real-world issues into my work, so writing the story around a class action lawsuit against a health insurance company resonated with me. Affordable health care is an issue everyone can relate to, as well as the difficulties patients encounter getting tests and treatments approved without jumping through major hoops.”

And like The Network, THE SILENT CONSPIRACY also tackles the unfortunate, but timely, issue of manipulation of facts by the media.

Shaw isn’t saying much about where the characters will go next, but THE SILENT CONSPIRACY ends with a cliffhanger that leaves absolutely no doubt there will be a Book 3—one in which Senator Brody Hamilton plays a bigger role, and Taylor will be in much more jeopardy.

Before readers can get their hands on that, though, Shaw and her sister will release a fourth Liv Constantine book, following up after this year’s hit The Wife Stalker. Writing and promoting for two series demands time and discipline—which Shaw says is a bit of a blessing in disguise with 2020 turning out to be a year of unexpected obstacles.

“I’m enjoying the fictional world much more than our real world right now,” she says. “I intentionally avoid the news, and I go up to my office every morning and work. I’d venture to say that things are never going to be uncomplicated again in our world, and the only choice we really have is to do our best to adapt.”

That’s the advice she would pass on to writers—both new and seasoned—who are struggling to “create” in this “unknown”: set small goals, do your best to accomplish them, adapt, and most important, be kind to yourself. “It’s okay if you’re not as productive as usual.”

That hasn’t been the case for Shaw, who, in addition to writing, has spearheaded numerous initiatives to help promote new thrillers, especially in light of the fact that the shelter-in-place mandates across the globe have forced many major events to cancel or go virtual. For Shaw, one of the most significant was ThrillerFest, a conference she hasn’t missed in eight years and looks forward to annually.

In fact, it’s because of her fondness for that conference—and the instrumental role ITW has played in her success—that Shaw has agreed to join the organization’s board. It’s another ball she’ll need to juggle, of course, but Shaw says she’s more than up for the challenge.

“Over the years, I’ve made amazing friends who have enriched my writing journey and made it more satisfying than it would have ever been on my own,” she says. “ITW does so much for authors, from the author debut program to craft classes, panels, The Big Thrill publication, book giveaways, and social media support, and I’m thrilled to be able to give back. I’m really excited to work with others to innovate educational offerings in this new environment, as well as to continue to provide excellent content to members at ThrillerFest and online.”