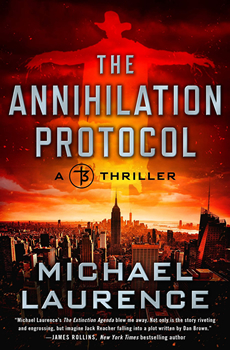 If you enjoy thrillers so plausible you can’t go to sleep at night, then Michael Laurence’s new novel, THE ANNIHILATION AGENDA, is for you. A mysterious syndicate known as the Thirteen has plotted in the shadows for centuries by infiltrating governments and manipulating world events, until the perfect moment when it can emerge and claim power with a global pandemic and a lethal nerve gas as its tools. It will be up to intrepid FBI Special Agent James Mason and his team to figure out what is going on before it’s too late.

While this nail-biter is Michael Laurence’s second thriller, he’s no stranger to storytelling. As Michael McBride, he’s the successful author of more than 20 science fiction and horror novels and novellas. The Big Thrill recently caught up with Laurence to find out what drives this mild-mannered family man who “squeezes in power-writing sessions between hockey practices and school and shopping and laundry and cooking and the everyday insanity that makes life worth living.”

“I’ve always looked up to authors like Dan Simmons and F. Paul Wilson, who’ve had amazing success writing across multiple genres without chasing publishing trends or compromising what makes them special,” he says. “I thoroughly enjoy writing across genres and letting the story decide which route it’s going to take.”

Though the leap from sci-fi/horror to thrillers wasn’t much of a leap, he admits. “The two genres aren’t necessarily all that different. Both involve high stakes, breakneck action, and the kind of threat that keeps the reader up at night. I would say that the biggest difference between the two would be that genre fiction tends to be more speculative in nature, while thrillers are grounded in the real world (although the two grow increasingly similar with each passing day).”

As a biology major, Laurence loves incorporating science in his stories. “I love that science is always in a constant state of flux. How many so-called facts have been disproven and how many formerly radical theories have become fact? And that’s perfectly fine, because it’s all about the search for the truth, much like history, so much of which remains hidden or ends up altered to fit modern political narratives.” 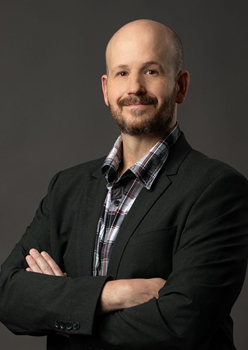 His mother was a history teacher, “so while other kids were vacationing at theme parks, we visited battlefields and historical sites. I learned at an early age that history isn’t just a string of dates to be memorized for a test; it’s a sequence of events shaped by the people of the time, a series of decisions made in response to situations that shouldn’t be viewed through modern eyes, but rather through the prism of the past.”

Nowadays, in Laurence’s view, “Readers are looking to escape reality, and often the best way is by vanishing into a book. It’s our job as writers to make them forget the world around them and give them hope for the happy ending they might not see in their daily existence. THE EXTINCTION AGENDA is the story of a group of underdogs derailing a plot to release a deadly virus, which resonates with people right about now since we were unable to do so in real life. Hopefully, the book makes people think a little harder about the forces at work behind the scenes and causes them to question whether or not the people who claim to have their best interests at heart actually do.”

A pandemic is only the start of the threats Special Agent Mason must face in THE ANNIHILATION PROTOCOL. “Mace is both like and completely unlike me. In many ways, he’s the ideal me. He’s loyal to a fault and unflinching in his principles, making him the kind of person you want at your side in a scrap, but someone you definitely don’t want on your tail. He has a black-and-white sense of right and wrong, which he sometimes struggles to rationalize within the constraints of the law. This poses a problem for him when faced with situations where doing the right thing requires stepping outside of the law or when finding that the law is being exploited to protect the guilty.”

Delving into the worlds of law enforcement, science, and history involves lots of “research, research, and more research,” Laurence says. “As an author, you have to figure that every person who reads your work will know more about something than you do, and the quickest way to throw a reader out of the story is by getting it wrong. Years ago, I read a book where the action took the protagonist to my hometown: Colorado Springs, Colorado. I remember being excited because I’d never read a story set someplace I actually knew, but the author got pretty much every detail wrong. It was like he just looked at a map and fudged it. I vowed right then and there that if I were ever a published author, I’d put in the effort to make sure that every detail was right. (Of course, I still make my share of mistakes, but it’s not for lack of trying.)”

One of the most intriguing concepts in this story is the Thirteen. This vast international conspiracy, Laurence says, “Is based loosely on the most powerful families in the world from the Industrial Revolution through World War II. Infamous robber barons and wealthy industrialists who amassed the kinds of fortunes the world had never known up until that point. These men left indelible marks on the world and molded western civilization in their image. But, as they say, power corrupts. Subsequent generations didn’t have to earn money and were gifted with power without having to learn responsibility. The world is their plaything and its rule their birthright. Until now, they’ve been content to manipulate events from the shadows, but the time has come to step into the light and claim what’s rightfully theirs. They know that the larger the kingdom, the more difficult it is to rule, and recognize that in order to claim their throne, they need to cull the global population to a more manageable number, so that they will be seen as saviors rather than oppressors.”

Enter the pandemic, the murderous agent, the Scarecrow, and the nerve gas. Laurence says, “I can only hope that 2020 doesn’t still have a threat like that waiting in the wings for us.” Boy howdy, so do we.

Laurence’s next thriller, The Elimination Threat, continues Mace’s hunt for the Thirteen before they can carry out a nuclear assault on Washington.

As Michael McBride, he has just completed the first installment of an apocalyptic trilogy, and in the science fiction world, Michael McBride’s third book in his Unit 51 series, Mutation, has just come out. His biggest challenge may be finding dedicated time to write, but clearly, he’s succeeding on a grand scale.

Michael Laurence was born in Colorado Springs, Colorado to an engineer and a teacher, who kindled his passions for science and history. He studied biology and creative writing at the University of Colorado and holds multiple advanced certifications in medical imaging. Before becoming a full-time author, he worked as an x-ray/CT/MRI technologist and clinical instructor. He lives in suburban Denver with his wife, four children, and a couple of crazy Labrador retrievers.