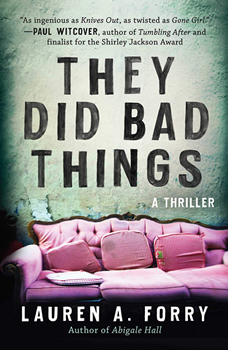 In 1995, six university students moved into the house at 215 Caldwell Street. Months later, one of them was found dead on the sofa the morning after their end-of-year party. His death was ruled an accident by the police. The remaining five all knew it wasn’t, and though they went on with their lives, the truth of what happened to their sixth housemate couldn’t stay buried forever.

Twenty years later, all five of them arrive—lured separately under various pretenses—at Wolfheather House, a crumbling, secluded mansion on the Scottish isle of Doon. Trapped inside with no way out and no signal to the outside world, the now forty-somethings fight each other—and the unknown mastermind behind their gathering—as they confront the role they played in their housemate’s death. They are given one choice: confess to their crimes or die.

The Big Thrill managed to catch up with author Lauren A. Forry for a quick chat about her upcoming novel, THEY DID BAD THINGS:

My dad was an FBI Special Agent, and we always loved watching mysteries and thrillers together, especially PBS’s Masterpiece Theater. I fell in love with Agatha Christie’s work and always wanted to write my own murder mystery where (like in my favorite Christie novel, And Then There Were None) people were picked off one by one.

There are people we meet who bring out the best in us, but this book is about normal people who bring out the absolute worst in each other. There is something about their chemistry as a group that twists them into terrible versions of themselves. If they had never met one another, their lives would have been perfectly normal. But they did meet, and they can’t resist the drama that keeps tearing them apart.

Agatha Christie, Shirley Jackson, and Daphne du Maurier are some of the classic authors I admire, especially their way of taking almost mundane situations and turning them into something tragic and horrific. Tana French and Ruth Ware have also been a major influence in different ways. They both can brilliantly construct a clever, mind-bending plot while making you care deeply for their characters.

Lauren A. Forry was brought up in the woods of Pennsylvania before moving to New York City to earn her undergraduate degree in cinema studies and screenwriting from New York University. She later earned her MA and MFA in Creative Writing and Publishing from Kingston University in London, England. She was awarded the Faber and Faber Creative Writing MA Prize for her thesis work, Abigale Hall, which was published here by Skyhorse and translated into multiple languages. Her short stories have been featured in The X-Files: Secret Agendas, Brick Moon Fiction, and Lamplight Magazine. She currently teaches English at Harcum College and resides in Bucks County, Penn. She never murdered anyone while in college.

A Dream Within a Dream by Mike Nappa and Melissa Kosci