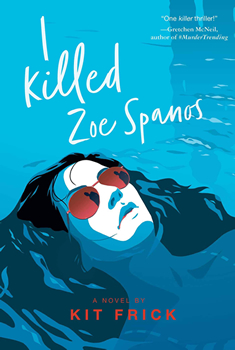 Before she was a mystery writer, Kit Frick was a poet. No wonder, then, that her young adult thrillers are noted for their rhythm and lyricism. Train doors open to the “thin cry of seagulls.” Waves break in “a fine white froth of the surf against the shore.” A young murder suspect has a “scraped-out” quality to her voice, while the detective interrogating her is “[captured] from the shoulders down, a headless menace.”

Frick has been writing seriously since her teens, but it wasn’t until her early thirties that she considered writing novel-length fiction. Despite a long history of reading mysteries and thrillers, she didn’t set out to be a thriller writer. “In a way, I fell into the genre,” she says. “It seeped into my creative DNA.”

Suspense drove the narrative in her first novel, See All the Stars, and she realized she was drawn to that avenue of storytelling. From there, she explains, her novels became squarely rooted in the mystery/crime space. By the time she was drafting her second book, All Eyes on Us, she knew it would be a thriller from the outset.

I KILLED ZOE SPANOS is Frick’s third novel, a murder mystery with an unreliable narrator whose shifting memories and perceptions create increasing psychological suspense. She tells us more about it in this The Big Thrill interview.

I KILLED ZOE SPANOS is an intriguing psychological study about guilt, trauma, and the reliability of memory. What inspired this story?

When the idea for I KILLED ZOE SPANOS was bouncing around in my head, I’d recently re-read Daphne du Maurier’s Rebecca for the fourth (fifth?) time and couldn’t help wondering: What if Rebecca de Winter had gone missing today, in the age of Serial and The Vanished and Bear Brook and all the other excellent true crime podcasts that have sprung up over the last five years? The idea for the novel came from a marriage between two obsessions of mine: Rebecca and true crime podcasts. Then I landed on the Hamptons setting—the American equivalent of the tony English seaside town where Maxim resides in his Manderley estate—and I KILLED ZOE SPANOS evolved from there.

The book is intricately plotted, with past events in first person, current events in third person, and podcast transcriptions interspersed throughout. It reminded me of The Time Traveler’s Wife, in that all these pieces come together in a very precisely constructed puzzle. How did you achieve that effect?

“Precisely constructed puzzle” is exactly the effect I was hoping for, so thank you! With each book, I’ve become more and more of a plotter. I outline briefly but comprehensively, by which I mean, I may not know more than a sentence or two about what needs to happen in any given chapter, which gives me plenty of space to play while drafting, but I’ve usually made most of my structural decisions very early on in the process (decisions like what POV a chapter will be in, how past and present will be interwoven, or where a podcast chapter will fit). While of course changes do happen mid-draft, having a kind of story map helps me stay focused on the forward trajectory since I’m frequently not drafting in a strictly chronological fashion.

One recurring theme in the book is the malleability of memory. Have you ever had a clear memory of something that later turned out not to be as you remembered it? What can you tell us about that experience?

I’ve had it both ways—memories that later proved to be false and real memories I’m told I shouldn’t be able to recall—so I really empathize with Anna, who is unreliable yet very relatable in her struggle. I have a clear childhood memory of meeting a group of slightly older kids and playing with them in the park at the end of my street. I remember what we did in the park that day, how it felt to be accepted by this older, cooler group. But it later turned out that I’d met these kids on vacation in Florida, near my grandparents’ house, and whatever I was remembering about playing in the park must have been a different memory altogether, two experiences my brain meshed into one. On the flip side, I’m told it’s unusual to have memories dating back to age two, but I have several snippets of memory from my first year of pre-school and one sense memory (smell) dating back even further.

Without spoilers, what is your favorite scene in the book, and why?

I loved writing the transcripts for Missing Zoe, the novel’s (fictional) true crime podcast. It was almost like dabbling in a new genre. I listen to so many investigative podcasts that the style and cadence came really easily. I can’t wait to listen to the I KILLED ZOE SPANOS audiobook, which will include a full-cast recording for the podcast chapters.

That sounds exciting! What advice would you give to aspiring and pre-published writers who hope for similar success?

Read widely in your age category and genre. Get to know the playing field. Seek out trusted readers for your work and listen to their feedback. Know that you don’t have to take every piece of feedback. Revise. Revise more. Remember that publishing is not a meritocracy. There’s a lot of luck and timing involved in getting a book published, and while both of those factors are beyond your control, understanding that they play a key role can help put your experience and others’ in perspective. Also, don’t call yourself “aspiring.” Just do it.

I have a new YA thriller coming out with S&S/McElderry in summer 2021. Here’s a teaser: it’s a story about two girls searching for answers in a cursed New York town and the true crime docuseries calling national attention to the town’s many mysteries—and opening the door to new danger.

Kit Frick is a novelist, poet, and MacDowell Colony fellow from Pittsburgh, Penn. She studied creative writing at Sarah Lawrence College and received her MFA from Syracuse University. When she isn’t putting complicated characters in impossible situations, Kit edits poetry and literary fiction for a small press and edits for private clients. She is the author of the young adult novels See All the Stars and All Eyes on Us, both from Simon & Schuster/Margaret K. McElderry Books, as well as the poetry collection A Small Rising Up in the Lungs from New American Press. Her third YA thriller, I KILLED ZOE SPANOS, will release on June 2, 2020.