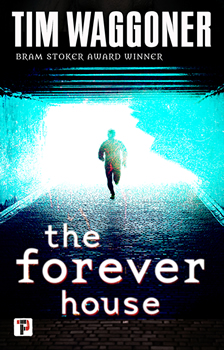 Tim Waggoner is no stranger to horror, and his latest novel, THE FOREVER HOUSE, is a worthy addition to the genre.

Meet the Eldreds, a sinister family that feeds on negative emotions, as they take possession of a house that had been on the market ever since a multiple murder took place there. Now the neighbors of this otherwise sleepy cul-de-sac must learn to work together if they are to survive in this otherworldly experience equivalent of the Addams Family moving into Knots Landing.

The title comes from a phrase Waggoner can’t quite place but is most likely in a real estate ad. The phrase became the spark of imagination as the author thought of a house that was so large on the inside that it went on forever.  In short, a house that could contain an entire universe within its walls. One could say the house is bigger on the inside.

“I was watching a program called The Nightmare Next Door, a true-crime series about dangerous—and often deadly—neighbors,” Waggoner recalls. “I thought that idea could work combined with my concept of THE FOREVER HOUSE.”

At that point, he decided to include the trope of the evil, monstrous family, a-la Addams Family or the clan in The Texas Chainsaw Massacre.

“What would happen if a family like that moved into a neighborhood, into a Forever House?” Waggoner says. “I’d also been considering writing a novel where neighbors from very different backgrounds, who didn’t exactly like each other, were forced to work together to survive. Once I combined these four ideas, I had the novel’s foundation and was off and writing!”

The three most important things to any real estate agent worth their commission are: location, location, and location. Thus, THE FOREVER HOUSE needed a special place.

“I wanted to create a feeling of the characters being enclosed and being trapped,” Waggoner says. “I wanted to limit the amount of people the Eldred lure into their house. A cul-de-sac always seems like a miniature settlement in and of itself to me, a microcosm of an entire town, almost an entire world unto itself.”

There is a large host of characters living already in the cul-de-sac. They feel like real people with problems that are mature—such as infidelity, gambling addictions, sexual impotence, and restrained pedophilia, among others.

“I spent some time developing profiles for each of the characters—including their attitudes toward one another, since they were neighbors,” Waggoner says. “The Eldreds are creatures who feed off negative emotions, so I wanted the human characters to not only have conflict between them but also inner conflicts that the Eldreds could exploit. The hardest character for me to empathize with was the pedophile who, while never acting on his impulses, still feels them. To empathize with all the characters, I focused on the emotional pain they experienced and kept reminding myself that, whatever else they might be, they were still human.”

Waggoner has always been attracted to all things dark and wonderful. “As a child,” he says, “one of my first memories is watching Frankenstein Meets the Wolf-Man on TV with my parents, and I was fascinated by the idea that actual monsters called dinosaurs once existed and walked the earth—maybe even on the same ground where my parents’ house was located. There’s something about stories of the strange and bizarre which stimulates my imagination like nothing else. The wonderful thing about darkness is that we can’t tell what might lurk inside it, and it invites our imaginations to run wild.”

In a time where computers that used to occupy a room have been reduced to handheld devices, Waggoner keeps an old-fashioned habit when it comes to his writing, and pairs it with a writer’s cliché.

“I write my first drafts longhand,” he says. “I’m not sure why, but the words seem to flow more easily when I write like this. I’m 55, and personal computers didn’t appear until I was 19, so I spent my formative years writing by hand. Also, I usually write in coffee shops. I like to have a certain amount of noise and activity around me as I write—not too much, and it has to be something I can ignore. No one at the coffee shop needs me. There are no family members, no students, no pets . . . just me, my black gel pen, and a blank notebook page.”

As a writing teacher, he’s often asked to give advice to aspiring writers. One of the most common pieces of advice new writers receive is “write what you know.”

“But if you take that too literally, all you’ll do is write personal essays, not fiction,” Waggoner says. “Instead, you should write what fascinates you, what scares you, what infuriates you, what mystifies you. Write the kind of book you’d love to read, only it doesn’t exist yet. Write the book only you can write, one that grows out of your imagination and obsessions, not anyone else’s.”

Tim Waggoner has published nearly fifty novels and seven collections of short stories. He writes original dark fantasy and horror, as well as media tie-ins, and his articles on writing have appeared in numerous publications. He’s won the Bram Stoker Award, the Horror Writers Association’s Mentor of the Year Award, and he’s been a multiple finalist for both the Shirley Jackson Award and the Scribe Award. He’s also a full-time tenured professor who teaches creative writing at Sinclair College in Dayton, Ohio.