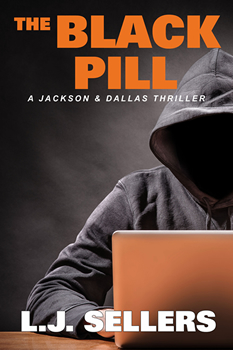 A body wrapped in plastic turns up in the middle of the road—with no ID and no viable explanation. The pressure builds when Detective Jackson must also locate a missing woman that few people seem to know. Both victims lived on society’s edge, so witnesses and leads are scarce. Worried that the woman’s life is in peril, Jackson resorts to following her ex-boyfriend, but the effort backfires in a deadly way.

Across the country, FBI Agent Jamie Dallas takes on a dangerous undercover assignment—tracking a sexual predator who brags about his assaults in a perverse dark-web forum. Using an alias, Dallas travels to Jackson’s hometown and discovers that her target’s crimes are just the opening salvo. Yet confronting the hatemongers could get her killed.

The investigators race the clock to find the victims, but will they discover the connection in time to save all the women caught in the deviant trap?

The characters in this story are very personal to me. I based their backgrounds on how my grandsons were living before I rescued them from a dangerous cult in Costa Rica. It was challenging to imagine how badly their lives could have turned out if not for our successful interference.

Most important, I want readers to engage with the characters and enjoy the story. Beyond its entertainment value, I hope the novel is also informative. Online hate forums and how they can be dangerous in the real world is an issue everyone needs to be aware of.

The research into the dark (incel) forums was deeply disturbing and sometimes surprising. I found that behind all the hate, there was a lot of pain. But that only reinforced my working crime-fiction premise that almost every perpetrator is also a victim.

L. J. Sellers writes the bestselling Detective Jackson mysteries—a four-time winner of the Readers Favorite Awards. She also pens the high-octane Agent Dallas series, the Extractors series, and provocative standalone thrillers. A woman of many words, L. J. also writes scripts in the thriller genre, including the true story about how she rescued her grandchildren from a cult in Costa Rica.

L. J. resides in Eugene, Oregon where many of her 26 novels are set, and she’s an award-winning journalist who earned the Grand Neal. When not plotting murders, she enjoys standup comedy, cycling, and zip-lining. She’s also been known to jump out of airplanes.