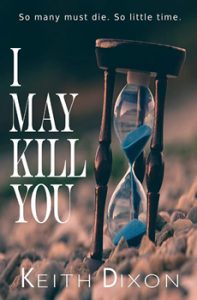 Serial killers are secretive animals. They keep their deeds to themselves and hope never to be found.

But there’s a new man in town—a killer who warns people in advance he’s going to kill them, then does it, in a variety of unusual, even bizarre, ways.

Ex-policeman Ben Buckland wants to catch this man not because he’s on the list … but because his 15-year-old daughter is. And that’s just not fair.

The Big Thrill caught up with Keith Dixon, author of the award-winning Sam Dyke Investigations and Paul Storey Crime Thrillers, to learn more about I MAY KILL YOU:

I wanted to write a book with a serial killer as the main villain, and I learned as I went on that it’s difficult to come up with convincing ways of killing people that are unusual but feasible. Fortunately, there’s an element of the plot (that I can’t reveal, as it’s pretty central to the story) that helped me get around this difficulty.

In this book I was creating a new central character, an ex-policeman who had lost his place in the world. The challenge was to make him sympathetic and yet cold in his pursuit of the villain. I was also inventing a fictional locale for him to work in, which was a lot of fun.

I’ve been a huge fan of many American writers of crime fiction. My desire to write again – after a gap of some years – was re-kindled by discovering Elmore Leonard in the 1980s. Lately, I’ve been astonished by the wizardry of the late Peter Temple, whose dialogue crackles and whose plots are serpentine and never obvious. I’d like to take both of these traits to learn from. I’ve also learned a lot from re-reading Ross Macdonald lately – particularly about the use of language.

Keith Dixon was born in Yorkshire and grew up in the Midlands. He’s been writing since he was thirteen years old in a number of different genres: thriller, espionage, science fiction, literary.

Two-time winner of the Chanticleer Reviews CLUE First in Category award for Private Eye/Noir novel, he’s the author of nine full-length books and one short story in the Sam Dyke Investigations series and two other non-crime works, as well as two collections of blog posts on the craft of writing.

His new series of Paul Storey Thrillers began in 2016 and there are now three books in the series.