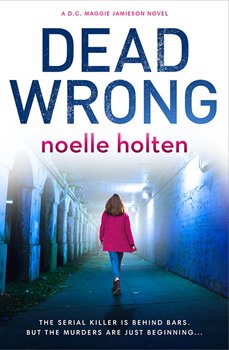 The serial killer is behind bars. But the murders are just beginning…

DC Maggie Jamieson’s past comes back to haunt her in this dark and gripping serial killer thriller.

They were abducted years ago. Notorious serial killer Bill Raven admitted to killing them and was sentenced to life.

But now one of them has been found, dismembered and dumped in a bin bag in town.

Forensics reveal that she died just two days ago, when Raven was behind bars, so Maggie has a second killer to find.

Because even if the other missing women are still alive, one thing’s for certain: they don’t have long left to live…

Author Noelle Holten took time out of her busy schedule to chat with The Big Thrill about her writing career and the second book in her Maggie Jamieson thriller series, DEAD WRONG:

Ian Rankin is one of my favourite authors. I love the Rebus series and how we see Rebus grow as a character. I hope to achieve this myself. The same with Angela Marsons – DI Kim Stone is a hard, clever copper but quite vulnerable – I’d like to be able to have readers who love my characters the way people love Angela’s.
Martina Cole has also been a huge influence – her determination and longevity in the book world is a testament to her writing.

Do you use your experience as a probation officer in your stories?

Yes – in a way, I use the knowledge I accrued as a PO for 18 years but not specific cases. My debut, Dead Inside, however, was a cross over – as I was a probation officer who also experienced domestic abuse in my home life. I used those emotions to get my story across.

How creepy my mind is at times. I really love writing about bad people and as I worked with quite a few in probation, I can draw on those experiences whilst adding extra bits to make it even worse!

I wanted to show that even though we believe that police are the only ones involved in solving crimes, there are actually many agencies behind the scenes that contribute. So my series is an ensemble series that shows how the police and other agencies work together.

Balancing fact and fiction in terms of procedures and policies so that it was authentic but not info dropping.

Going back to my roots in the criminal justice system and being able to talk to colleagues within the police and probation to make sure that my details were correct.

I hope that they are gripped and interested in a multi-agency approach in crime fiction. Not your typical police procedural as I show the various agencies involved in solving crimes.

Noelle Holten is an award-winning blogger at CrimeBookJunkie. She is the PR & Social Media Manager for Bookouture, a leading digital publisher in the UK, and was a regular reviewer on the Two Crime Writers and a Microphone podcast. Noelle worked as a Senior Probation Officer for eighteen years, covering a variety of cases including those involving serious domestic abuse. She has three hons BAs – philosophy, sociology (crime & deviance) and community justice – and a masters in criminology. Noelle’s hobbies include reading, attending as many book festivals as she can afford, and sharing the booklove via her blog.

Dead Inside, her debut novel with One More Chapter/Harper Collins UK, is an international kindle bestseller and the start of a new series featuring DC Maggie Jamieson.