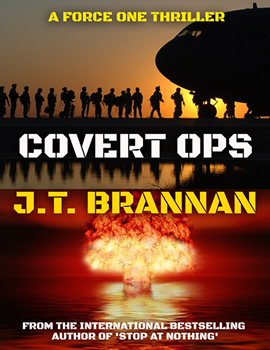 J. T. Brannan is used to writing about individuals. Each of his previous series installments, as well as several standalone thrillers, have always focused on the protagonist. But with COVERT OPS, Brannan not only kicks off a new series, but also focuses on an entire team rather than a single character.

COVERT OPS carries on from Brannan’s Mark Cole series—though he says you don’t need to have read those books to enjoy this one. In this upcoming release, Mark Cole is older, and now the commander of a counter-terrorist unit known as Force One.

“The Force One series focuses on the other team members, the ones who now carry out the missions,” Brannan says.

Described as a geopolitical thriller ripped from tomorrow’s headlines, COVERT OPS takes place against the ongoing US-Iran war. Border clashes are intensifying, and the threat of greater violence is palpable—but Force One analysts are convinced the flames of conflict are being fanned by an independent group behind the scenes. But who?

That’s what Force One leader, ex-Navy SEAL Jake Navarone, and his team must race to find out…before they’re too late to save the world.

Brannan talks more about his thrilling new series starter and more in this The Big Thrill interview.

Writing action can be tricky—it’s easy to fall on clichés. How do you keep action scenes fresh, and what has being a former karate champion taught you about writing hand-to-hand combat scenes?

Writing action scenes is one of the things I love doing. I plan an action scene carefully, choreographing it as if it were part of a movie. In fact, what I try and do is get that same level of response in someone reading my books that they would have at the cinema, watching an action movie on the big screen—actual excitement!

To make each scene sufficiently different, I use the environment the characters are in. I’ll use real places (with the liberal assistance of Google Maps and Street View) so that the environment becomes an essential element of the scene, almost a character itself. I’ll also use objects that are in the environment; for instance, if there is a chase through a market, what is there that could be used in a fight? Perhaps there’s a stall selling carpets or rugs, so one of the characters can use that in some way, perhaps as a shield, even as a weapon. Or there might be a place where food is being served, which offers all sorts of opportunities—knives, pans of boiling water, hot grills, etc. Because each environment is new, it’s easy in this way to keep the action scenes fresh.

Being a karate champion—and also a nightclub doorman—helps with the action scenes too. It’s not so much the techniques used, but more the mindset and the emotions you feel when involved in a violent confrontation. Depending on the book I’m writing, the action might be very realistic, or a little more over-the-top—but no matter what, the feelings of the characters when confronted by violence are the same, and this draws heavily on personal experience.

What attracts you to the military thriller genre?

I love the fact that you can combine exciting action scenes with more thought-provoking reflections on international affairs, global security issues, and the internecine world of politics. When I write these novels, it gives me an opportunity to research not only military organizations that I find interesting, but also all of the political and social aspects that act as the backdrop to the events that I write about—all of which I find absolutely fascinating!

What authors or books have influenced your career as an author, and why?

First Blood by David Morrell is definitely one of the most influential novels that I read when I was young, along with The Running Man by Richard Bachman/Stephen King. One of the reasons is because of the surprising, rather “down” endings that both of these possess—something I hadn’t really come across before, and something that had a major impact on me. The finale of Stop at Nothing, my first novel to feature Mark Cole, was probably influenced by these great stories.

Another author who influenced me a great deal when I was growing up was Tom Clancy, the father of the techno-thriller genre. I loved the world he created, the intelligent plots, and the incredible amount of research, along with some unforgettable characters.

I took a peek at your upcoming projects and I see you have a new book called Pandemic slated for June 1 release. I believe it’s in response to what’s going on globally with COVID-19, but…how did you write that so fast?

I’ve not finished it yet actually! But yes, it is in response to current events, although it will incorporate ideas that have been bubbling away under the surface for several years, on similar themes. I tend to write quickly, once I have a novel planned and ready to go. I’ll spend a considerable amount of time working out plot details and so on, but once the structure is in place, I write between 2,000 and 5,000 words per day, so that an average length novel of 50,000 words takes about two to three weeks for the first draft. The most I’ve written in a day is 15,000 words, but I wouldn’t like to repeat that.

There seems to be a lot of pressure for authors to write during this time, but I think that’s easier said than done. What advice would you offer to aspiring writers right now?

Writing is good, but so is reading. In fact, you can never read too much! For anyone struggling to write, I suggest using the time to relax a little—for both pleasure and research, read books, watch movies and TV shows, follow the news, think about what’s happening in the world and how you might be able to use it in the future. Even if you don’t write a word, you might start to formulate ideas over this time period which will lead to exciting new projects in the future.

J. T. Brannan is the author of the Amazon bestselling political thriller series featuring Mark Cole, the all-action Colt Ryder series, and the action-adventure John Lee series, as well as the high-concept thrillers Origin (translated into eight languages in over thirty territories) and Extinction (his latest all-action novel from Headline Publishing).

A brand new series, featuring the private eye Maxwell Knight, continued in December with the second novel, The Hanged Man.

He now writes full-time and teaches martial arts in Harrogate, in the North of England, where he lives with his two young children.