New York Times and USA Today bestselling author Lynn Cahoon combines dark themes with light-hearted fun in all three of her cozy mystery series: the Tourist Trap series, featuring the owner of a small coffee/book shop; the Farm-to-Fork series, featuring the owner of an Idaho farm-to-table restaurant; and the Cat Latimer series, featuring a Colorado English professor who owns a bed and breakfast. As the titles suggest, these books are comfort food for the mind, and Cahoon often hears from readers who say that her stories have helped them through difficult times.

A prolific writer, Cahoon has 51 distinct titles listed on Goodreads. She writes 2,000 words a day, five days a week, and has been on this pace since beginning her upcoming Farm-to-Fork book in February. “Ten thousand a week gives me a good pace and keeps me in the story,” she says.

Asked how she manages to maintain this demanding schedule while holding down a day job, she says, “I write in bursts. Two fifteen-minute breaks, words at lunch, complete my words as soon as I get home. Then my evening is free. This is a release week so I’m a little behind in words, but I’ll catch up on Saturday. Writing until I hit the 10K.”

Then she adds, “All the other things fall in after the words. Always get the words first.”

CORNED BEEF AND CASUALTIES, her latest release, is a holiday-themed novella in her Tourist Trap series. The book stands alone, but readers familiar with Jill Gardner and the other South Cove characters will enjoy revisiting hunky police officer Greg, sharp-tongued Aunt Jackie, and other favorites.

Set during South Cove’s St. Patrick’s Day festivities, the book offers small-town comfort spiced with cozy-style mystery. And for those who want a taste of life in the protagonist’s bookstore/coffee shop, there’s a recipe for the St. Patrick’s Day cheesecake prominently featured in the book.

We welcome her to The Big Thrill to talk about the book and her life as a writer.

Let’s start with your writing journey. You’ve said that, while you were honing your craft, you wrote for some “confessions” magazines. What did that experience teach you about writing romantic mysteries?

I loved writing the confessionals. One, it was one story with a twist. Addicted to Debt’s main character was in a debt reduction counseling group. The group leader caught her using a credit card to pay for a toy. He assumed it was for her son when it was for a cleaning job she had. I loved writing the mistakes we make and the way we correct those. Even when people still have the same ideas about who you are. And it taught me to write quickly and stay in the story. It’s hard when you’re writing a full novel to stay focused, but you have to keep the story upfront.

Your home page says you write about small towns and families—the ones you’re born into and the ones you create. How does this book explore those ideas?

The Tourist Trap series is all about the relationships in small towns. Jill’s kind of the observer for all of it. She grew up with just her aunt after a while so she isolated herself after high school and college. Living in the city allowed her to be by herself. It was only when she vacationed in South Cove and met Miss Emily that she realized what was missing in her life—connections. Now, she’s created a life, a family, and a world where she’s connected.

Tell us a little bit about Jill. What makes her an ideal amateur sleuth?

She’s curious. And she has a lot of time available. She only works mornings at the bookstore-coffee shop and after the commuters get their coffee, she mostly has time to read. So there’s a lot of time for her to get in trouble. She’s also not afraid of asking things that maybe are none of her business. She has a law degree so she has a rational, focused mindset—she’s good at putting together the clues. And, better, she knows when the clues don’t make sense. She’s also addicted to people-watching.

Is there a character in the series that readers clamor for more of? If so, which one, and why do you think he or she resonates so strongly with readers?

Everyone loves a fortune teller. Esmeralda is our town fortune teller and part-time police dispatcher-receptionist. She has visions, but at times, she admits she’s really, really good at reading people. In one of the books she has her own mini story where she was a huge part of solving the side mystery. I also have a bonus story where she’s in New Orleans with the people she grew up with. I’ve started thinking about a new series about this branch of Tourist Trap.

By this point in the series, Jill and her police officer boyfriend, Greg, have settled into a pretty comfortable relationship. How do you sustain tension in a series with so many positive long-standing relationships?

Being in a long-term relationship, I know it’s not always hearts and flowers. So it’s easy to have issues even when it’s not just about the meet or the Happily for Now.  And now, everyone’s getting married so I’m planning a cool Las Vegas girls’ weekend for book #11.

You’ve mentioned your involvement with Romance Writers of America, and obviously you’re also a member of International Thriller Writers. How does being active in professional organizations help writers?

Being part of a writing group keeps me involved in the community. I know when things are changing. The information I get helps me forecast my career. In addition, there are educational and promotional activities that you wouldn’t get if you weren’t part of the group. I like the ability to ask stupid questions to someone who knows me locally rather than letting my lack of knowledge show on large email groups or worse, in front of my agent or editor. And it’s a good reminder that you’re not totally alone in this career.

What’s next? Will we see more of Jill and Greg?

Tourist Trap has two more novellas coming out this year (Mother’s Day Mayhem and A Very Mummy Holiday) as well as (finally) Tourist Trap #11—Memories and Murder (coming November 29th). My readers have been asking about it since Killer Party released in 2017. 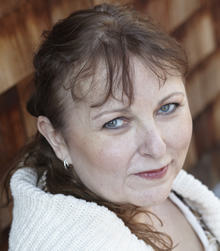 Lynn Cahoon is the award-winning author of several New York Times and USA Today best-selling cozy mystery series. The Tourist Trap series is set in central coastal California with six holiday novellas releasing in 2018-2019. She also pens the Cat Latimer series available in mass market paperback. Her newest series, the Farm to Fork mystery series, released in 2018. She lives in a small town like the ones she loves to write about with her husband and two fur babies.

The Unseen by Lisa Towles