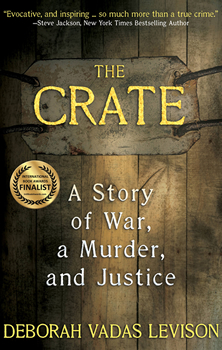 After surviving the horrors of the Holocaust – in ghettos, on death marches, and in concentration camps – a young couple seeks refuge in Canada. They settle into a new life, certain that the terrors of their past are behind them. They build themselves a cozy little cottage on a lake in Muskoka, a cottage that becomes emblematic of their victory over the Nazis. The charming retreat is a safe haven, a refuge from haunted memories.

That is, until a single act of unspeakable violence defiles their sanctuary. Poking around the dark crawl space beneath their cottage, the family discovers a wooden crate, nailed tightly shut and almost hidden from view.

Nothing could have prepared them for the horror of the crate’s contents – or how the peace and tranquility of their existence would be shattered.

Award-winning writer Deborah Vadas Levison spent some time with The Big Thrill and offered insight into her true-crime novel, THE CRATE:

Much of the book focuses on the seemingly limitless capacity for human evil, but I also talk about our capacity for good – so I believe the end is not only touching but is uplifting. I hope readers will get a sense of the importance of remembrance and of telling their loved ones’ stories, both as a way to document history and as a gift to those who lived it. In my family’s case, I feel it is critical to preserve the stories from the Holocaust especially as the voices of denial are getting louder. As fewer and fewer survivors remain, I think it is incumbent upon the second generation to do so.

Women (and men) who have suffered abuse now have global platforms like the #MeToo movement in which to be heard. The media is paying attention; the courts are paying attention. But what about the victims of domestic violence who have been silenced forever? I wrote this book so that the young mother we discovered, murdered and packed into a wooden crate, would not be simply a statistic, forgotten. I wanted to give her a voice and tell her story… because I think the whole point of true crime is to honor the victims.

It took a great deal of editing and polishing as I went along, but in the end I feel I found my “voice” — which, for me, to a large extent means the bending of the rules of syntax and punctuation to achieve an effect. In some of the book I am aiming to shock – because readers SHOULD be shocked at the violence perpetrated both by a killer in the present and by the Nazis in the past. In parts I aim for poignancy, because the life stories and events described often are sad. Discovering how to use words to move the reader is an ongoing process, I think.

THE CRATE intertwines the stories of a present-day murder with mass murder on a societal level. I telescope between the past and present, revealing the investigation, trial, and resolution of the crime involving the crate, while also delving into the horrific experiences of my parents not only during the Holocaust but in its aftermath. And I also reveal the startling and eerie set of coincidences that tied together the lives of my family members and the life of the victim in the crate.

My favorite author is Pauline Gedge, a Canadian writer and Egyptologist whose stories of ancient Egypt transport the reader so entirely, with vivid characters and settings, that coming back to present-day reality is like surfacing from deep water. I hope I achieve just a fraction of that feeling as I bring my readers into the stories of the Canadian north and of World War II Hungary. 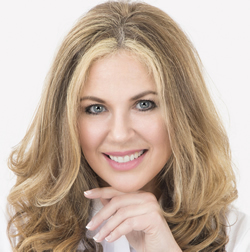 Deborah Levison’s life has two parts: the first in Canada, where she attended the Royal Conservatory of Music and the University of Toronto, and the second in the U.S., where she’s lived for 20 years.

She’s an award-winning writer, published in national and international media. Her first book, a true crime story with echoes of the Holocaust, is  THE CRATE: A STORY OF WAR, A MURDER, AND JUSTICE, which was just named a Finalist by the 2018 International Book Awards. She shares a home in Connecticut with her husband, three children, and a doodle named Moose.