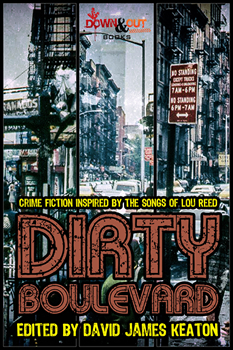 Upcoming genre stars like Alison Gaylin team up with crime fiction legends such as Reed Farrel Coleman, along with Cate Holahan, Gabino Iglesias, Tony McMillen, and many of the most exciting new names in crime and horror fiction, who teach us that a perfect day is often anything but, that the power of positive drinking is a destructive force rarely contained, and that knock-down-drag-out drag queens are probably way tougher than you.

Dedicated to the memory and works of Jonathan Ashley.

The Big Thrill caught up with anthology editor David James Keaton to discuss the inspiration behind DIRTY BOULEVARD: Crime Fiction Inspired by the Songs of Lou Reed:

I hope that readers will end up with an appreciation for the diverse voices and upcoming talents we’ve gathered for this anthology, as well as find a fun diversion from more traditional crime fiction with some trippier interpretations of the world as seen through Lou Reed’s mirrored sunglasses. I also hope to do justice to Jonathan Ashley’s original vision for the book, which he conceived before his untimely passing last year.

I feel that now more than ever, with the shifting national landscape and increasingly fluid identities of our population, that the songs of Lou Reed, as well as works continuing to be inspired by his music, are a good choice for a timely celebration of his legacy as envisioned by both new and established writers.

Was there anything new you discovered, or that surprised you, as you edited this book?

Initially, I worried that the world Lou Reed described in his music wouldn’t be as relatable, or as recognizable, today. The seedy New York City nightlife he details, for example, might seem like another planet compared to the scrubbed and tourist-friendly mecca Times Square has become. But I shouldn’t have worried. The writers were able to channel that street-smart, gritty vibe very easily in their tales, and even if some aspects of the world of the ’70s and ’80s seem distant to us, those characters are still out there, up to no good every night, no matter how respectable they may seem during the day.

I think readers will be surprised at the breadth of styles on display here. Everything from noir to hardboiled to magic realism, even a dash of science fiction. Which is a perfect way to describe Lou Reed’s discography, come to think of it.

What authors or books (or musicians) have influenced your career as a writer, and why?

A friend of mine in high school first introduced me to Lou Reed with a sun-warped cassette tape, and for the longest time, I thought that was what his album Transformer, and popular music in general, was supposed to sound like. In some ways, I still try to emulate that dissonant, alien voice shaking the speakers in my car. 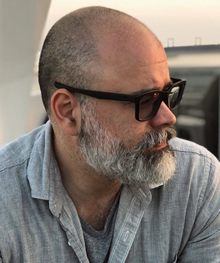 David James Keaton’s fiction has appeared in over 100 publications, and his first collection, Fish Bites Cop! Stories to Bash Authorities (Comet Press), was named The Short Story Collection of the Year by This Is Horror. His second collection of short fiction, Stealing Propeller Hats from the Dead (PMMP) received a starred review from Publisher’s Weekly. His novels The Last Projector (Broken River Books) and Pig Iron (Burnt Bridge) have been optioned for film. Recently, he was the co-editor of the anthology Hard Sentences: Crime Fiction Inspired by Alcatraz (Broken River Books). He teaches composition and creative writing at Santa Clara University in California.