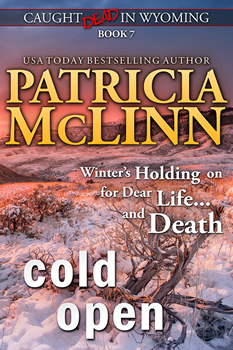 In television, a cold open sometimes rolls before the opening credits, often a teaser to news or a feature to follow. For TV journalist Elizabeth Margaret “E. M.” Danniher, a nippy March and April are just a tease for spring after a long Wyoming winter. In her short time in Sherman, she’s learned that winter starts in October and might not end until June. Since last June, a series of murders have tested her and her KWMT-TV colleagues’ reporting – and amateur sleuth — skills. And the small town’s rumor mill is churning about her relationship with handsome sports reporter Mike Paycik – or is it rugged rancher Tom Burrell?

As winter winds down, Elizabeth is ready for spring and looking for a place of her own. Ah, a little peace and quiet as she begins to settle in Cottonwood County. That is, until she discovers homicide at her front door.

I hope that my readers escaped for several hours into a twisty-turny whodunit, and that along the way they discovered new friends in the good people who populate small-town Sherman, Wyoming. I also hope they learned something about the TV reporting business and the great state of Wyoming.

The book not only shines a light on the work involved in a small-town TV market, but on the bias faced by women in the world of broadcast TV. The protagonist uses the skills that have served her well in journalism to solve crimes that some in an insular community don’t necessarily want to have solved. At the same time, the book entertains with dry wit, rustic humor and the tease of a romantic triangle.

I’ll let you know when I finish the book! My characters unfold as I write. Case in point: in Look Live (Book 5 in this 7-book Caught Dead in Wyoming series), I was about 3/4 through the book when a character that I’d assumed would be the murderer ended up dead himself!

COLD OPEN will NOT be the last book in the Caught Dead in Wyoming series.

I discovered mystery while in college. I started with mostly classics, Agatha Christie, Ngaio Marsh and some of the mysteries by Georgette Heyer. A lot of them included humor along with the mysteries, and I loved that. For western flavor, I’ve always admired Louis L’Amour. 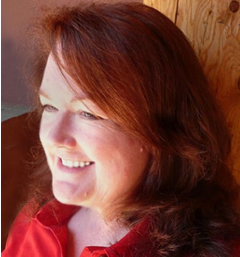 USA Today bestselling author Patricia McLinn spent more than 20 years as an editor at The Washington Post after stints as a sports writer (Rockford, Ill.) and assistant sports editor (Charlotte, N.C.). She received BA and MSJ degrees from Northwestern University.

McLinn is the author of more than 45 published novels, which are cited by readers and reviewers for wit and vivid characterization. Her books include mysteries, romantic suspense, contemporary romances, historical romances and women’s fiction. They have topped bestseller lists and won numerous awards.

She has spoken about writing from Melbourne, Australia, to Washington, D.C., including being a guest speaker at the Smithsonian Institution.