I TAKE CARE OF MYSELF IN DREAMLAND by Ross Klavan

Bartok is left with scars from the army but something else, as well-the memory of a strange, mystical experience that he calls “Red River.” Back home and out of luck, he wanders through 1970’s New York hoping to recapture this strange state. But others see Bartok as an easy mark for some very dirty business and their plan is to use him for murder. 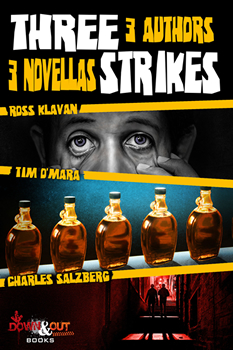 Aggie is back in business. He’s no longer smoking bootleg cigarettes as he did in “Smoked,” now he’s smuggling another usually legal-and quite valuable-product: maple syrup. Unfortunately, on the way from the Midwest to New York City, he’s picked up an unwanted traveling companion, the fifteen-year-old daughter of his latest boss. It seems she wants to get to NYC to meet up with her on-line boyfriend, who turns out to be much more than she expected. All Aggie wants to do is drop off the syrup, pick up a paycheck, and get on home. Before he does that, he’s gotta play hero. Again.

THE MAYBRICK AFFAIR by Charles Salzberg

As World War II rages in Europe, it’s a couple weeks before Pearl Harbor and rookie reporter Jake Harper, who works for a small Connecticut newspaper, is assigned a routine human interest story. A reclusive, elderly woman has quietly passed away in her small cottage upstate. As Jake investigates the old woman’s life and death he finds that years earlier she was tried and convicted of murdering her husband in a well-publicized, lurid trial in London, England. And, after digging further, he, unearths evidence that she might have had a connection to an even more famous British serial killer and that the ramifications of this story might affect America’s entry into the War.

The Big Thrill managed to catch up with two of the three authors to discuss this crime fiction bundle, THREE STRIKES, and here’s what they had to say:

People who do bad things are not necessarily bad people. (Tim O’Mara)

These guys can really write, and how do they know so much about crime? (Charles Salzberg)

It adds a touch of humor to some serious topics. (Tim O’Mara)

It shows that crime doesn’t have an expiration date and that even a single crime can affect the entire world population. (Charles Salzberg)

I knew going in that legal substances-such as maple syrup-can be smuggled for great profit. I just didn’t know it could be in the millions. (Tim O’Mara)

I learned a lot about Jack the Ripper I didn’t know, and about the notorious English Maybrick murder case and how it might have been tied to Jack the Ripper. (Charles Salzberg)

Aggie would make a wonderful hero if he weren’t so busy trying to make some money. (Tim O’Mara)

That there are always forces looking for ways to benefit from tragedies. (Charles Salzberg)

George V. Higgins and Elmore Leonard for creating dialogue as true as anyone else ever did. Chandler and Hammett for showing all of us that crime fiction is literature. (Tim O’Mara)

Saul Bellow, Vladimir Nabokov, Philip Roth, for technique, humor, use of language and giving me something to shoot for. Chandler and Hammett for showing writers that it takes an awful lot of talent to write a good crime novel. (Charles Salzberg)

Ross Klavan’s novella Thump Gun Hitched was published in the collection Triple Shot. He is the author of the comic novel Schmuck (Greenpoint Press) and his original screenplay Tigerland (starring Colin Farrell) was nominated for an Independent Spirit Award, produced by New Regency, and directed by Joel Schumacher.

Tim O’Mara is best known for his Raymond Donne mysteries about an ex-cop who now teaches in the same Williamsburg, Brooklyn, neighborhood he once policed. O’Mara’s short story “The Tip” is featured in the 2016 anthology Unloaded: Crime Writers Writing Without Guns, and his novella Smoked appeared in Triple Shot, both from Down & Out Books. O’Mara taught special education for 30 years in the public middle schools of New York City, where he now teaches adult writers and still lives. In addition to writing the stand-alone high-school-based crime drama So Close to Me, O’Mara is currently curating a short-story anthology to benefit the non-profit American Rivers.

Charles Salzberg is the author of the Shamus nominated Swann’s Last Song, as well as the sequels, Swann Dives In, Swann’s Lake of Despair, and Swann’s Way Out. He’s also the author of Devil in the Hole, named one of the best crime novels of the year by Suspense Magazine, and Second Story Man. His novella Twist of Fate appeared in Triple Shot. He has written numerous articles for major magazines and nonfiction books include From Set Shot to Slam Dunk, an oral history of the NBA, and Soupy Sez: My Zany Life and Times, with Soupy Sales. He teaches writing at the New York Writers Workshop, where he is a Founding Member, and he is on the board of the New York chapter of Mystery Writers of America.