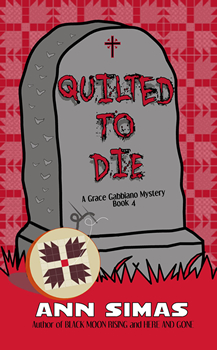 Grace Gabbiano left Seattle PD under a dark cloud, but as a sergeant with Coburg PD, she’s put all that behind her. She certainly doesn’t expect her former lover, Dave Mackey, to come asking for help a year later. Chief Aidan Cruz has a short fuse for bad cops, and he’s certain Mackey falls into that category. Mackey engages in a cat-and-mouse game with Grace, and then he vanishes, leaving her to wonder exactly how insidious the Seattle “thing” she left behind actually is.

Ann Simas, author of QUILTED TO DIE, spent some time with The Big Thrill discussing her latest mystery:

It’s so much fun being able to bring my heritage to a book series, I’d really like readers to fall in love with Grace Gabbiano and her Italian family—their quirks, their food, their deep ties to each other, her mother’s persistent attempts at matchmaking. Aside from the family aspect, I want readers to be so engaged with QUILTED TO DIE that they won’t want to put it down and when they do, they’ll be eagerly awaiting the next book. (Backstory: Check out Dressed to Die, Sliced to Die, and Buried to Die to find out what Grace has been up to until now.)

Like all my books, QUILTED TO DIE is a little complicated, but it maintains a fast pace and has some unique angles. Grace comes face-to-face with Lt. Dave Mackey, her former lover and supervisor from Seattle PD, in this book. The confrontation brings a challenge in itself, but Mackey is looking for help, and he’s under the assumption that Grace is the one who will provide it. Grace is under the mistaken impression that she left all the turmoil at SPD behind when she moved back to Coburg, Oregon, but as the saying goes, “That just ain’t so.” Her life becomes one of turmoil and uncertainty and she’s really the only one who can do anything about it. The good news is, she’s part of a good crew at CPD. The bad news is, she’s a target and she may not make it out of the mess Mackey created unscathed.

The idea for this story actually took root because of Coburg’s annual Quilt Show, which is why I started to worry in 2017 when the show was cancelled for lack of an organizer. Ever the optimist, I nonetheless commenced writing the book. January 2018 arrived, and still no Quilt Show announced for July, and nothing in February or March, either, but finally, in April, there it was, a post on Facebook. The 2018 Coburg Quilt Show was coming back with a new inside venue (the charter school), they had organizers, and they had a date (July 20 and 21).

I’m excited that I get to debut Quilted to Die at the Coburg Quilt Show, because, as you may have guessed, the first murder in the book involves the Quilt Show (this is not a spoiler, case in point, the word “die” in the title), and with any luck, there won’t be a real murder for CPD to contend with.

Coburg Police Department does exist, although I’ve given them more paid officers, more reservists, and a new building across the street from the Coburg Rural Fire Department. Because I love doing research, I also found the perfect drug to inject into the story. There is a deviation from the actual current event, too. The Quilt Show has been only one day in the past. By the time the announcement was made that it was a two-day event, I had finished writing the book as a one-day event (with the prior day for set-up). My understanding is that it was expanded this year to coincide with the two-day 50th Anniversary of the Coburg Golden Years Festival. So…if you’re in or near Coburg, Oregon then, stop by and say “hi.”

Every author I’ve ever read who’s taken chances with their writing—crossing genres, mixing genres, taking their stories one step further—has given me the courage to do the same in my writing. We’ve all heard the maxim, “There are no new ideas, only new ways of presenting them.” That’s the challenge I accept every time I begin to write a book. It’s what keeps writing exciting, challenging, and fun for me, and I also believe it’s what keeps me from having the dreaded writer’s block. 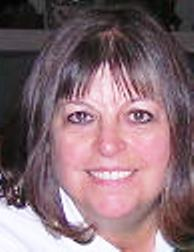 Ann Simas lives in Oregon, but she is a Colorado girl at heart, having grown up in the Rocky Mountains. The author of 23 novels, one novella, and one short-story collection, she particularly likes to write a mix of mystery/thriller/suspense, with a love story and paranormal or supernatural elements. Three of her books have been Romance Writers of America Golden Heart Finalists.

Ann is also an award-winning watercolorist and budding photographer who enjoys needlework and gardening in her spare time. She is her family’s “genealogist” and has been blessed with the opportunity to conduct first-hand research in Italy for both her writing and her family tree. The genealogy research from centuries-old documents, written in Italian, has been a supreme but gratifying and exciting challenge for her.

To learn more about Ann and her many books, please visit her website.