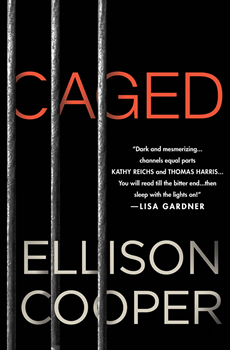 We might as well get something out of the way right now. There is no Ellison Cooper. That’s right—Ellison Cooper does not actually exist. And yet, she does. How do I know? Because CAGED is a first novel written by none other than Ellison Cooper.

So I won’t. But what I will tell you is that the facts of Ellison Cooper’s life are startlingly similar to the facts about another woman, who shall remain anonymous but who also claims to have written CAGED.

First, let me tell you something about this new thriller.

Sayer Altair is a Washington, D.C.-based neuroscientist who works for the FBI. (Oddly enough, Ellison Cooper is also a neuroscientist, as is her alter ego, but neither of them work for the FBI, so I’m sure this is merely one of those weird coincidences.) Still reeling from the death of her fiancé, Sayer specializes in analyzing the brains of serial killers. When local police stumble onto a gruesome murder involving a young girl later identified as the daughter of a high-profile senator, Sayer gets a chance to put her knowledge to work as she struggles not only to find the killer but also to find another young girl who, like the earlier victim, is being slowly starved to death while held captive in a cage.

Meanwhile, the killer, who is evidently carrying out some kind of bizarre scientific experiment, is also quite adept at planting deadly booby traps that are taking the lives of anyone who gets close to solving the crimes. And although I can’t divulge details, I will say DNA plays heavily into the plot of this fast-paced, twisty thriller.

Okay, now that that’s out of the way, here’s what I know about Ellison Cooper.

She was born just outside of Washington, D.C., but she has dual Irish and American citizenship because her father is Irish. She says she’d probably be living there now if she “didn’t hate rain so much.” Her mother, trained as a microbiologist, was a stay-at-home mom who tried to write fiction. Her father ran a computer firm.

“My parents were both intellectually curious and always told us we should follow our bliss,” Cooper says. “As a child, I was a hellion. Today, I’d probably be diagnosed as being ADHD. It got to where I’d eat lunch in the vice principal’s office. I was always a voracious reader. I read anything I could get my hands on. I must have read A Wrinkle in Time a hundred times.”

Cooper wanted to be an astronaut, but she had terrible eyesight. “It was a crushing day when I found I couldn’t be one,” she says. Although she wanted to be a writer from the time she was a child, she was “mildly dyslexic,” so it didn’t seem to be the right career path.

Cooper (and her alter ego) has a Ph.D. in anthropology from UCLA, with a background in archaeology, cultural neuroscience, ancient religion, colonialism, and human rights. She spent time in Central America, where she lived in a tent in the jungles of Belize for nine years while searching for lost Maya ruins. She’s also done research in Micronesia, West Africa, and at the University of London’s Institute of Historical Research. Her work has been published in a variety of academic journals, which, if you must know, is why she uses her Ellison Cooper identity to write novels.

“I’ve written for a number of academic publications under my own name and I didn’t want there to be any confusion,” she explains. “Besides, if I ever go back to teaching, I’m not sure I want my students to be reading my serial killer novels.”

Oh, Ellison, you don’t know how cool it would have been if any of my professors had spent their free time writing about serial killers. But maybe that’s just me.

Early on, Cooper thought maybe she should be a lawyer. But the summer before starting at Georgetown Law School, she decided she should do “something crazy,” so she managed to get herself invited to an archaeology site out west. She loved every minute of it.

After her first semester of law school, just as she was about to take finals, she asked herself, “Why am I here? I hate everything about this. I don’t want to do this for the rest of my life.”

She sent emails to people running archaeology projects and was accepted to one in Belize. Cooper spent three years of field seasons there, mapping sites through the jungle from one city to another.

Danger lurked. There was that time she encountered a jaguar. “It was a couple hundred yards away and it stared at us as we backed away slowly,” Cooper remembers. And then there were the poisonous snakes and the peccaries, pig-like, medium-sized hoofed animals that can be dangerous.

“I gained a lot of confidence, out there in the middle of the jungle with nothing but a machete and a compass,” she says.

After she got that out of her system, Cooper decided to go to grad school, but first she did a stint as a murder investigator for the Washington, D.C. Public Defender Service. After graduation she worked as a professor, and between stretches of academic research on cultural biology, she tried writing novels for fun. She completed an Indiana Jones-like adult fantasy, but she admits that it wasn’t very good and wasn’t really the kind of book she wanted to write.

Since then, Cooper has honed a writing routine that involves a lot of outlining. “I have a huge whiteboard, and I create a really broad outline,” she says. “I think of it as bumpers. I know who did it and some of the major events, but the book careens between those boundaries. Storytelling is hardest for me. It’s the part of the craft I’m still trying to figure out. I guess I have that imposter syndrome.”

Cooper says her protagonist, Sayer Altair, isn’t based on anyone in particular, but is rather an amalgam of “traits of women I most admire.” Altair will reappear in the sequel to CAGED Cooper is working on, called Buried.

Oddly enough, the other Ellison Cooper is also working on a sequel, and guess what it’s called. 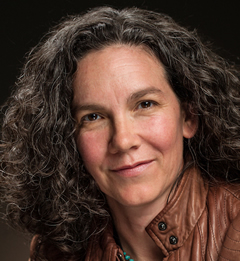 Ellison Cooper has a Ph.D. in anthropology from UCLA, with a background in archaeology, cultural neuroscience, ancient religion, colonialism, and human rights. She has conducted fieldwork in Central America, West Africa, Micronesia, and Western Europe. She has worked as a murder investigator in Washington DC, and is a certified K9 Search and Rescue Federal Disaster Worker. She now lives in the Bay Area with her husband and son.

To learn more about Ellison, please visit her website.