The Key to Getting It Right 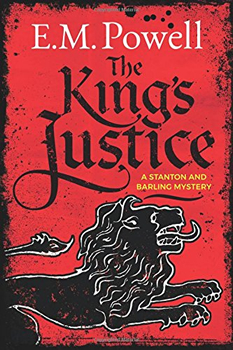 E.M. Powell is a master of the thrilling, fast-paced historical crime novel, and her latest book, THE KING’S JUSTICE, is no exception. THE KING’S JUSTICE is the first in the Barling and Stanton mystery series. Once again, the author of the bestselling The Fifth Knight series takes readers back to the reign of King Henry II, to a time when civil unrest was the norm and brutal crimes were common. Mary Lawrence, author of The Alchemist’s Daughter, says, “E. M. Powell has created an immensely likeable pair in Stanton and Barling, in this exciting new medieval mystery series. Action-packed and laced with sly humor . . . I was completely riveted by THE KING’S JUSTICE.”

Indeed, Barling and Stanton are a fresh take on the detective duo. Aelred Barling is a rule-loving, middle-aged clerk at the court of Henry II; Hugo Stanton is his talented but risk-taking young assistant. It’s a relationship rife with tension. “Barling likes his legal documents and solitude,” Powell says, “While Stanton is never happier than when he’s on a fast horse or stopping by an alehouse.”

When Barling and Stanton are ordered to enforce the rule of law after an outlaw is charged with murder, Powell’s twisty, well-plotted mystery finds the pair thrust in the midst of a medieval murder investigation that challenges the customs of the times and risks their own lives.

It’s no coincidence that THE KING’S JUSTICE takes place during the same century as Powell’s Fifth Knight thriller series. The Fifth Knight series has seen such success with readers worldwide, that Powell and her publisher decided to continue writing about Twelfth Century England. “When I had completed the third book, I was having the ‘what’s next?’ conversation with my editors at Thomas & Mercer,” Powell says. “Their steer was that they would like to see a new series, set in the same world, possibly using one of the existing characters, and asked if I had any ideas. I didn’t! But, like all historical fiction authors do, I went off down the research rabbit hole. And guess what I found? One of the greatest achievements of Henry II was the establishment of the Common Law in England.”

That realization turned into the crux of Powell’s THE KING’S JUSTICE. “In order to impose law and order on his kingdom,” Powell explains, “King Henry also sent out traveling judges to preside over all cases of serious felonies: arson, robbery—and murder. When I found that 1176 was a key year, that was my ‘a-ha!’ moment. That fitted perfectly with the dates of The Blood of the Fifth Knight. I had a secondary character in that book that I knew would be perfect for his own series. It felt like the Writing Gods had smiled. And so THE KING’S JUSTICE was born.”

So how does Powell get it right? “It’s a case of months and months of research. Much of it is reading reliable academic work on the time period and offering up thanks for every knowledgeable historian who has chosen to publish a book that relates to my time period. There’s also the joy of trudging through muddy fields to look at yet another 12th century castle, with the long-suffering family in tow.”

Powell points to re-enactors as an additional source of credible research. “I’ve had lots of contact with re-enactors, those wonderful folk who spend their time re-creating 12th century life. They re-create weapons, food, clothing, you name it, and are always willing to talk about it. Even better, I can get my hands on it. Yes, chain mailed knights look good. Yet you find a new respect for them when you realise that a mail suit weighs around 56 pounds. I could hardly get it off the ground!”

Sometimes, Powell admits, the realities of the time period can add to a story in ways one just couldn’t make up. “THE KING’S JUSTICE opens with men accused of a murder who are proclaiming their innocence in a murder case. Forget prosecution and defense lawyers. One way of establishing guilt was to make the accused face the ordeal of water. The accused was tied up and thrown into a pit filled with water. Said water had already been blessed. If the accused sank, they were innocent. If guilty, they floated. It was believed that God had judged them. And if guilty, they were taken from the water and hanged. Henry’s punishment for thieves was to have a foot and a hand chopped off.”

It’s the Middle Age’s cruel approach to justice that makes Powell’s protagonists, Barling and Stanton, and their mission of administering this new rule of law so appealing—and so fraught with conflict. Powell understands her genre and how to use such historical contrasts to fuel tension. This focus on craft has led to Powell’s success as an author. In fact, when asked what advice she would give to aspiring authors, Powell points to the importance of educating oneself—and persevering. “Learn your craft to get the writing basics right. Great craft makes your natural storytelling shine,” Powell says. “Most of all, don’t ever, ever give up. I’ve met too many great would-be authors who have had their confidence knocked and who didn’t carry on. That’s such a shame: don’t let it be you.”

Sage advice from an author who’s been heavily involved in the writing community. In addition to being a bestselling author, Powell is a member of International Thriller Writers and a contributing editor for The Big Thrill, she blogs for English Historical Fiction Authors, and she’s the social media manager for the Historical Novel Society. Powell recommends that aspiring and newer authors follow her lead. “Joining a writing organization that consists of like-minded individuals, such as those listed above, is invaluable. They exist for every genre of writing. As well as all sorts of support and advice, it will help you to identify what it is that you are writing. Genre and market are closely linked, so if you’re writing in a defined genre, you should find it much easier to sell it when that time comes.”

As for Powell, that time is now. The next Stanton and Barling mystery, The Monastery Murders, will release in September 2018. “In it, Stanton and Barling are sent to investigate the bizarrely hideous murder of a monk in a remote Yorkshire abbey,” Powell says. “Naturally, this murder is the first of many.”