Dominick Prince has been a magnet for trouble his entire life. A series of poor life choices and his natural tendency to attract the wrong kind of people have resulted in two failed bids at grad school, a failed writing career, and a failed marriage to the contested successor of a crumbling criminal family. These failures persuade Dominick to accept an offer he SHOULD refuse from an old high school classmate, Dutchy Kent, who wants to mount a stage version of one of Dominick’s stories in New York City. In reality, Dutchy is trying to track down a missing $1.2 million, and needs someone else to do the dirty work, someone who attracts trouble and is easily manipulated. Cue Dominick…

Unfortunately for Dutchy, the Dominick who shows up at his office is not the kid he used to know. Because for 29 years Dominick has played the role of patsy, fall-guy, cautionary tale, understudy, and joke. But he’s about to break character and go off script to show the world the true effect of violence and bullying. His old dreams may be dead, but a million dollars and the satisfaction of making an old bully suffer seem like a fair trade-off.

That no matter how bad your life is, Dominick Prince’s life is worse. Seriously though, I want readers to see that violence in my world has consequences and that a character who was not violent to begin with has become violent through the course of two books’ worth of mayhem.

In a way, every book written and published makes a contribution to the genre. Every book, whether good or bad or somewhere in the middle, is a dash of seasoning to the gumbo, if you will. But I think the character arc of Dominick over the course of these three books addresses some of our society’s wacky views on masculinity and violence and the arts. I also think it does say something about violence as well and how repeated exposure to violence can turn even non-violent people violent after a long enough time.

I was surprised. halfway through the book when it ended and I thought the book was dead. I had intended it to be one kind of book, but the character had changed so much over the course of the first two books of the series that i had to go back and reacquaint myself with him and who he had become. He started off as a very identifiable doppelganger for me at a certain point in my life, but he started this book a completely separate character.

This is my nerdy take on Death Wish, both the book and movie. 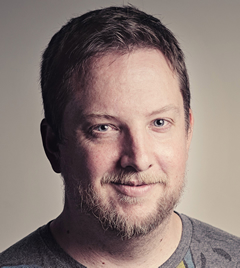 Bryon Quertermous is the author of the novels Murder Boy, Riot Load, and Trigger Switch. His short stories have appeared in a number of journals of varying repute and he was shortlisted for the Debut Dagger Award from the Crime Writers Association. As an editor, Bryon has worked with traditional stalwarts as well as more cutting-edge operations. He’s worked as a freelance editor for New York Times-bestselling authors and books he’s edited have been chosen as the best of the year by USA Today, Library Journal, and others.

To learn more about Bryon, please visit his website.