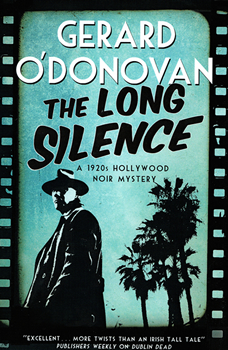 February, 1922. Hollywood is young but already mired in scandal. When a leading movie director is murdered, Irish-American investigator Tom Collins is called in by studio boss Mack Sennett, whose troubled star, Mabel Normand, is rumoured to be involved.

But Normand has gone missing. And, as Collins discovers, there’s a growing list of suspects. His quest leads him through the brutal heart of Prohibition-era Los Angeles, from speakeasies and dope dens to the studios and salons of Hollywood’s fabulously wealthy movie elite, and to a secret so explosive it must be kept silent at any cost…

The Big Thrill caught up to novelist Gerard O’Donovan to discuss his latest thriller, and his first in a new series of historical crime thrillers set in 1920s Hollywood, THE LONG SILENCE:

A sense that silent-era Hollywood was, briefly, one of the most thrilling, liberating, creative and glamorous places that ever existed, and that there was a dark side to paradise, too. A realisation of just how ripe for rediscovery are the wonderful but largely forgotten actors, directors and producers who pioneered the most influential contribution to culture in the last 100 years: the movies. And the hard truth that when justice and vested interests collide, justice often comes off worse.

It introduces readers to a time and a place – silent-era Hollywood – that in crime-writing terms has gone relatively unexplored until now. And it does so by re-examining a famous real-life murder that has remained a notoriously unsolved puzzle for almost 100 years.

An entire world of pioneering actors, directors and producers – many of them Irish or of Irish decent – who are now largely forgotten. A California that was still relatively unspoilt. A place where it was still possible to dream big, big dreams. And a murder that, ultimately, it was in everyone in power’s best interests to remain unsolved.

It’s really good fun! Despite being a noir-ish mystery it is a novel about people living their dreams at a time and in a place where dream-making was encouraged as never before. It has thrills and romance aplenty, and a heart-stopping climax. And it also brings vividly back to life the spirit of Los Angeles in the 1920s, so much of which has disappeared.

So many writers, from Conan Doyle to Christie, Hammett to Chandler, Du Maurier to Highsmith, Simenon to Mankell, Crichton to Cornwell, Michael Connelly to Peter Temple, Elmore Leonard to James Ellroy and Cormac McCarthy and many more who I will blush not to have mentioned when I stop to think. More than any other books though, in terms of capturing perfectly a moment in history and an entire world of common endeavour, it would be hard to find anything I admire more than Patrick O’Brian’s extraordinary collection of Aubrey-Maturin seafaring novels. 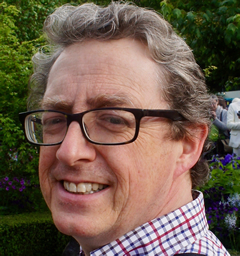 Gerard O’Donovan is a novelist and journalist, well known as a TV critic for The Daily Telegraph. Shortlisted for a Crime Writers’ Association Debut Dagger award his novel The Priest, featuring Irish cop Mike Mulcahy and reporter Siobhan Fallon, was published internationally in 2010. Dublin Dead followed in 2012. THE LONG SILENCE is the first in a new series of historical crime thrillers set in 1920s Hollywood, featuring Irish-American private eye Tom Collins.

To learn more about Gerard and his work, please visit his website.