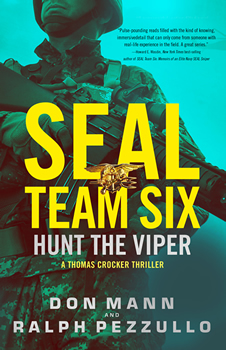 This timely military thriller finds SEAL Team Six and their humanitarian allies confronting a notorious ISIS general, the Viper, during his occupation of Aleppo, Syria.

Despite the efforts of the Assad government and its Russian and Turkish allies, Syria is succumbing to the Islamic State. While Crocker and his SEAL Team Six comrades try to help a small Kurdish border town organize a resistance army, he finds an unexpected connection with Severine, a French epidemiologist working for Doctors Without Borders.

As Severine and her colleagues establish a makeshift hospital in besieged Aleppo, Crocker counsels caution. He knows too well that their NGO status will be no protection from the Viper, a notoriously vicious ISIS general with a deeply personal hatred of the West. When the Viper’s men kidnap one of Severine’s American colleagues, Crocker will pull every string at his disposal to launch a rescue mission. But in a situation where the US has no official business, he’ll push every boundary of how far he’s willing to go–and how far his SEAL brothers in arms will follow him–to save innocent lives.

A better understand of the civil war in Syria and the people involved – US special operations, Kurdish militiamen, ISIS militants, humanitarian workers, and civilians.

It humanizes people on all side of the conflict and shows the challenges in operating in a dangerous and politically complex environment.

The extent to which the Kurds are involved in the Syrian Civil War, their culture, history, and political aspirations.

What you’re going to learn about the psychology of the ISIS leaders and the way the interpret the Quran.

Ralph Pezzullo is a New York Times bestselling author, and award-winning playwright and screenwriter. His books have been published in over twenty languages and include Jawbreaker (with former CIA operative Gary Berntsen), Inside SEAL Team Six (with Don Mann), The Walk-In, At the Fall of Somoza, The Chopin Manuscript (winner of the 2008 Audio Book of the Year), Plunging Into Haiti (winner of the 2006 Douglas Dillon Prize for American Diplomacy), Eve Missing, Most Evil, Left of Boom, and the SEAL Team Six thrillers Hunt the Wolf, Hunt the Scorpion, Hunt the Falcon, Hunt the Jackal, Hunt the Fox, Hunt the Dragon and the forthcoming Hunt the Viper.

He’s the recipient of a Peabody Award and grants from the National Endowment for the Humanities, Jerome Foundation, Mellow Foundation and others. His plays, including Tail of the Tiger, have been produced in New York City, London, Chicago, and by regional theaters across the country. The American Wife premiered last year at the Park Theatre in London to sold-out audiences.

He has written screenplays for directors Oliver Stone, Antoine Fuqua, George Gallo, and all the major movies studios. His screenplay adaptations of The Walk-In and Zero Footprint are currently in pre-production at Open Road and Alcon. And his TV series Ghost, based on the forthcoming book by the same title, is currently in development at Sony.

To learn more about Ralph and his work, please visit his website.