On the Run, Discovering the Truth 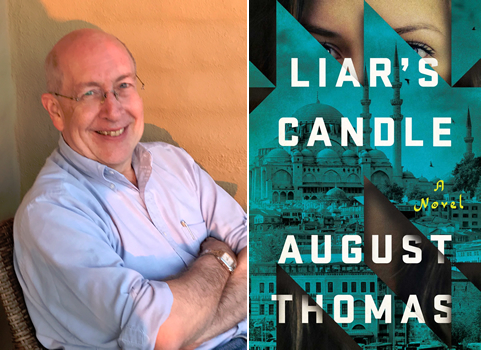 For August Thomas, the love affair with Turkey began in 2007, when she was 16. With her mother, they traveled 2,400 miles across the country, from the bazaars of Istanbul to the underground cities of Cappadocia and the ruins of Ephesus. “We watched dervishes whirl in a rose-covered caravanserai, ate fresh lamb by the roadside, took a ferry across the Dardanelles to the ruins of Troy, and drank scorching glasses of tea in the gardens of the sultans’ palace.”

She returned at 18 to study Turkish in Ankara, then again at twenty-one as a Fulbright Scholar at Bogazici University in Istanbul, and finally at twenty-four to bear witness to a nation in uproar.

She poured this all into LIAR’S CANDLE, the story of a young summer intern named Penny Kessler at the U.S. Embassy in Ankara, who barely survives a bomb that kills and injures hundreds. For reasons she doesn’t understand, there are those who believe she may have played a part and the situation escalates rapidly, as the CIA, State Department, and Turkish government all pile in with their own agendas, intensely interested in what she may know or, worse, may tell. Forced to go on the run, the clock ticking, she must dig deep to discover the truth, not only about the terrorist attack and the treacheries of those in power but also about what she herself is made of.

At one point, Penny is told, “You notice things,” and that is true of the author as well. The book is filled with the details of Turkish life, from the unique gesture for “no” to the interiors of Turkish houses, and the politics of wearing a headscarf. “By the time I wrote the book,” she says, “I’d been traveling in Turkey for a decade. I’d studied at Bogazici and been an extra on a godawful Turkish soap opera. I knew Turkey. The challenge was really when to stop adding details so they didn’t get in the way of the plot.”

The plot itself seemed natural. Thomas had been curious about intelligence work since she spent a day at the NSA when she was thirteen, and after meeting U.S. diplomats in Ankara, she spent hundreds of hours of research into diplomacy and intelligence, all of which provided inspiration for LIAR’S CANDLE.

So did the political situation in Turkey. President Erdogan had begun as a reformer, but then increasingly began seizing control of the media, judiciary, military, police and other institutions. Massive local protests broke out, but were violently put down with rubber bullets and water cannons. Thomas had many friends and acquaintances who’d stagger back, their eyes blood-red from getting tear-gassed. Other people chose to protest peacefully by banging pots and pans out of the windows and flashing their lights off and on. “It was an unearthly experience: thousands of protesters, banging pots and pans in their apartments up and down the shores of the Bosphorus, as the lights flickered in a thousand distant windows… When I last returned in 2015, the deterioration was even clearer. And that was before the July 2016 coup and its aftermath, which have turned an already difficult situation into a human rights catastrophe.”

For all the seriousness of that situation, though, Thomas also simply wanted to tell a good story. Some of her fans have mentioned such names as Le Carre and Follett, but she prefers to cite Hitchcock, the Bourne and Bond movies, and The Americans, as well as such indirect influences as Agatha Christie, Terry Pratchett, Dan Brown, “and even the Tamora Pierce feminist action/adventure YA novels I read as a kid.”

Her biggest influence, however, was and still is her mother, Rosanne Daryl Thomas, who has published five books and has an MFA in screenwriting from Columbia: “Thanks to her, we’ve always talked a ton about story in our house.” Her mother home-schooled Thomas from ages nine to thirteen, and one of their more memorable years was described in her mother’s book Beeing: Life, Motherhood, and 180,000 Honeybees, when, due to an unexpected opportunity, her mother took up beekeeping: “She wanted to teach me about being brave enough to follow through on your dreams, so she took a leap of faith. That lesson definitely made an impression on me.”

August Thomas’s own leap of faith with LIAR’S CANDLE actually began with another book entirely. She’d been working on a novel about Richard III since her early teens, and because of it acquired not only two major scholarships but a literary agent. After rewriting it “a million times,” she got the idea for LIAR’S CANDLE, and then…

“When it went on submission to publishers, I was traveling overland from Vienna to Bulgaria for a magazine article. I was on the sunny banks of the Danube in eastern Hungary when I found out Rick Horgan at Scribner wanted to see the manuscript. My agent actually hadn’t even sent it to him yet—Rick must’ve heard through the grapevine.

“I was in Belgrade when my agent said Rick had read the book and wanted to talk with me. I was so distracted, I tripped right over a velvet cord at a Serbian palace museum and landed in the exhibit. I fled the scene and ducked into a 200-year-old kafana where the waiters wear ridiculous historical costumes and called my agent in London to set things up. But before I could talk to Rick, I had to get to Nis, a broken-down east Serbian city known best for its tower of human skulls.

“Nis was cold and dark and pouring with rain. I finally dragged my suitcase to my hotel. It was locked. I had visions of huddling under a suitcase in a Serbian thunderstorm, trying to charm some editor at Scribner while not getting electrocuted (too many human skulls in this town already).

“Eventually, I got into the hotel and shut myself into my room. I paced around that tiny purple Serbian hotel room for over an hour talking with Rick. The next day, I took another bus through the misty mountain passes to Sofia, Bulgaria. By the time the fantastic news came through – a two-book deal! With Scribner! – I was in Plovdiv. When my agent told me I had two hours to decide on the pre-empt, I was standing in a graffitied Bulgarian underpass. I celebrated by taking myself out for the fanciest meal in town, a $17 plate of duck in the basement of a nineteenth-century house, and buying a chicken kebab for a small Bulgarian street kitten.”

She’s now at work on the sequel — “Let’s just say I was in Budapest this winter for research” – and no doubt Penny Kessler still has a lot to learn about herself. Fans of  LIAR’S CANDLE will be eager to find out what.

August Thomas began her first novel, Liar’s Candle, at age twenty-three. Fluent in Turkish, she has traveled and studied in Turkey as the recipient of a Fulbright Scholarship, and holds Master’s degrees from Bogaziçi, Istanbul’s top public university, as well as the University of Edinburgh. She also has two degrees from the University of Massachusetts. A travel writer as well as a novelist, she lives in Massachusetts. To learn more about August, please visit her website.