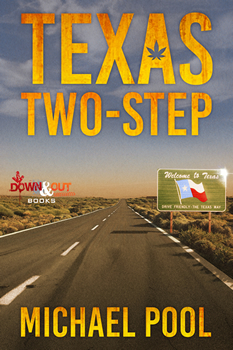 Cooper and Davis are a couple of jam band-obsessed Texas ex-pats growing some of Denver’s finest organic cannabis and living the good life on tour. Or, at least they were, until legal weed put the squeeze on their market and cramped their playboy lifestyle.

When their last out-of-state distributor gets busted by an Illinois task force, they’re left with no choice but to turn to their reckless former associate Elroy “Sancho” Watts to unload one last crop down in Teller County, Texas.

But Sancho Watts has troubles of his own in the form of Texas Ranger Russ Kirkpatrick, tasked under the table with nailing Watts for anything that will stick because of his involvement in the drug-induced suicide of a state senator’s son.

Not to mention his infamous new business partner, Heisman quarterback and NFL burnout Bobby Burnell, a man working to rise from the ashes of his self-destructed football career by making a name for himself in his criminally inclined Teller County family, no matter who he has to double-cross to get there.

What ensues is a pine-curtain criminal jamboree where everyone involved keeps their cards close to their vest, and all the high-stakes two-stepping is sure to result in bloodshed.

I hope readers will find the book both entertaining and emotionally engaging, and it will change their perspective on the line between criminals and police officers. I really wanted to capture the humanity of every character in the book, and show that, despite being at odds from a legal standpoint, many times police and outlaws have a lot more in common than people would like to believe.

There are good people on both sides of the law in the book, and corrupt people on both sides, too. I want people to take a little nuance away from the book about the artificial assumptions we all make about people based on their station in life. Most of us are just people doing the best we can. It ain’t always pretty.

There are plenty of books out there with hardened criminals doing hardened criminal things. And Texas Two-Step has some of those types, too. It’s just the nature of prohibition– it takes a certain type of person to be willing to corner an illegal market and risk prosecution or death in the process.

But what I think is unique about Texas Two-Step is you have two guys who are essentially peaceful country-boy hippies growing a little dope to enable an easy lifestyle, and who have been pushed out of the (relatively) small-time cannabis cultivation market by the legalization of cannabis in their locale. In attempting to leave their local market to move their product out of state, they get in over their heads with the exact type of violent criminals we more often expect to see involved in trafficking.

What results is a story-driven novel with people on all different ends of the legal spectrum who need a change, and whose path to that change has them bumping up against each other in conflicting and occasionally violent ways.

There is one POV character who was a total unsympathetic screw up when I started writing him, but as I got further into the book I found myself feeling incredibly sympathetic to him, even rooting for him at times. I ultimately really enjoyed writing from his point of view even though I expected it to  be my least favorite. It’s a great experience as a writer when your own characters surprise you and win you over to their cause. Texas Two-Step ended up being quest for redemption from all angles. I was surprised to discover that in the editing process.

Let’s just say that I allegedly did my research in a past life… I hope the authenticity of the plot’s characteristics and lifestyles come through on every page.

Elmore Leonard and Walter Mosley come to mind in terms of crime fiction. I fall down the rabbit hole every time I pick up one of their books. In terms of prose style, Raymond Carver and Ernest Hemingway. I tend to be a minimalist, descriptions really bog me down as a reader, so I keep them to a minimum in my writing. There will also always be a touch of Hunter S. Thompson and Charles Bukowski in my mindset and subject matter, too.

Michael Pool was born in Tyler, Texas, and lives in Denver, Colorado. He is a private investigator, Brazilian Jiu-Jitsu instructor, and crime fiction author, as well as the founder and editor of Crime Syndicate Magazine.