A Ferry Ride to Inspiration 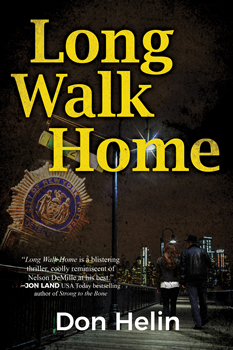 When I listen to my friends talk of New York City, most focus on Manhattan. Watching the ball drop at Time Square, checking the latest ratings in the stock market, seeing plays on the “Great White Way,” or eating at the awesome restaurants.  I’d like to give you a guided tour of my favorite corner, one that ended up finding its way into my fiction.

For the past 10 years I’ve been traveling to New York City to attend Thrillerfest.  During the first three years, I stayed at the Grand Hyatt in Manhattan, the host hotel for the event.  I was a member of the 2008/2009 Debut Authors class, and I wanted to be near the action to get to know my classmates and the thriller author community better, plus make sure I attended all of the events and activities.

Then I was told by a friend that since I am retired military, I could stay at the Coast Guard Guest House on Staten Island.  I looked into it. For those of you who are not military, there are a number of hotels and motels on Staten Island, and I can guarantee they are less expensive than those in Manhattan. Driving into Manhattan is maddening.  Now I can drive to New York City from my home in central Pennsylvania on the Interstate, then pull into the borough of Staten Island, never touching Manhattan.

Each morning I was in New York City, I’d wake early, drive 10 minutes to the Staten Island ferry site and park in the large guest parking lot.  It’s a short walk from the lot into St. George’s Terminal.  The terminal houses all the things I need – restaurants to get a coffee and a roll, plus a place to pick up the New York Times.

The ferry is free and runs 24 hours a day.  It leaves Staten Island and the Manhattan side every 15 to 20 minutes during rush hour, then every 30 minutes during mid-day and in the evening.  Sometimes I’d read in the terminal, taking time to drink my coffee, then catch the ferry, or if I was in a hurry for an appointment or a class, I’d jump on the next ferry to the Whitehall terminal on Manhattan.

Traveling across the Hudson River early in the morning, you can watch the sun rise over the horizon.  Passing the Statute of Liberty as the sun comes up is a sight to behold.  It gives me a thrill to think about those who first saw the statute as they headed to Ellis Island to enter this country.

Arriving in Manhattan, I can catch the red line subway two blocks away, or I sometimes take a few minutes and wander over to Battery Park, right next to the ferry terminal, where you can take the boat to the Statute of Liberty and Ellis Island.

I love to watch all the people, and it helps me research characters I can use in my books.  During those many trips on the ferry, an idea began to take shape.  Ideas for thrillers are everywhere, whether it be in newspapers, on television programs, in discussions with friends, or from your own experiences.  One morning as I rode the ferry, I got the thought, “What if we were hijacked?”  From that idea, my novel LONG WALK HOME was born.

I didn’t want to write another plot carried out by foreign terrorists, so I chose a group of veterans and called them the Forgotten Warriors.  Everyone has heard news reports about the frustrations among veterans in obtaining care from the Veterans Administration.

It can increase suspense to have an event that happened years ago create a problem today.  For Zack, that is what happened with his father.  His dad, a NYPD officer, was killed in the line of duty 30 years ago, then branded a dirty cop.  Zack has never believed what others said about his dad and has wanted to determine once and for all what really happened.

This gave me a chance to track Zack around Manhattan to meet with some of his father’s partners, two of whom are assaulted and shot. This leads Zack to Long Island to visit with a Mafia Don who Zack believes may have knowledge about what happened to his dad.  The more he explores the past, the more troubling the present becomes.

It’s fun to hatch a plot from an idea that grew from my travels in my favorite corner of New York.  Once you start looking, you’ll see these ideas are everywhere.  it’s only a matter of paying attention to what is going on around you.

During his time in the military, Don Helin served at a number of stateside posts as well as overseas assignments in Vietnam and Germany.   He is the author of five thrillers that draw from his military experience, including three tours in the Pentagon.  His novel Secret Assault was selected as the Best Suspense/Thriller at the 2015 Indie Book Awards.

Don is a member of International Thriller Writers, Military Writers Society of America, Pennwriters, a state-wide writers group in Pennsylvania, and is a mentor with the Mystery Writers of America.  He  lives in central Pennsylvania where he is hard at work on his next thriller.

Between the Lines: Walter Mosley