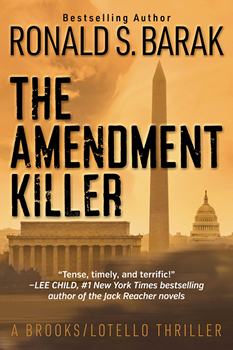 “WE HAVE YOUR GRANDDAUGHTER. HERE’S WHAT YOU NEED TO DO.”

That’s the text message Supreme Court Justice Arnold Hirschfeld receives as hearings commence in the U.S. Supreme Court to determine the fate of the 28th Amendment – enacted to criminalize abuse of power on the part of our political representatives.

In the meantime, Hirschfeld’s precocious and feisty 11-year-old diabetic granddaughter Cassie, brutally kidnapped to control her grandfather’s swing vote upholding or invalidating the amendment, watches her insulin pump running dry and wonders which poses her greatest threat, the kidnappers or the clock. As Brooks is forced to choose between saving our nation or saving the girl.

The Big Thrill caught up with bestselling author Ronald S. Barak to discuss his legal thriller, THE AMENDMENT KILLER:

My website brand is blurring fiction and reality. I like to write very timely fiction about real world events and to demonstrate that a great novel can be a page turner at the same time as thought provoking. Lee Child was kind enough to say THE AMENDMENT KILLER is “tense, timely, and terrific!” Tense as in a page turner. Timely as in thought provoking, in this instance addressing our current dysfunctional political system—and what can be done about it. Terrific as in I hope readers, like Lee, will conclude that I can write an entertaining thriller true to my brand. John Lescroart also said THE AMENDMENT KILLER “might well serve as a primer for the commercial legal thriller. The concept is high, the pacing supersonic, the characters well-drawn and sympathetic. It should come with a warning: addictive reading ahead. It’s as good a legal thriller as I’ve read this year.” I hope readers will say, “What John said.”

If you mean within the four corners of the writing experience, I learned how true two things are that I have always heard about writing. I learned how valid the adage is that to be an effective writer, you have to write about what you know, whether by virtue of life experience or by research, or both. In THE AMENDMENT KILLER, I wrote about constitutional issues and I wrote about diabetes. Being a courtroom lawyer and a diabetic, I had plenty of life experience to draw upon. I also learned that you never have a draft you can’t improve. In my case, one of the greatest challenges I confronted in writing THE AMENDMENT KILLER was to take complex issues and find a way to present them in a way that would be understandable to readers without the same technical experience, and to which readers with less experience would readily relate. Outside the four corners of writing itself, I learned what a great and supportive organization ITW really is, in particular how wonderful any number of ITW members, most of them board members, and all incredibly successful and busy authors, were willing to help by reading and commenting on my manuscript. In addition to Lee and John, I received incredible support from Sandra Brannan, Anthony Franze, Andy Gross, K.J. Howe, and Jon Land. You can see what these generous people had to say on my website.

That protagonist Cyrus Brooks isn’t just a brilliant legal scholar, but that he also has a surprisingly lighter side and dreams he can sing like the best on The Voice, dance like the best on So You Think You can Dance and play blues music like Eric Clapton.

Lee Child taught me to just say it, not overthink or overstate it. John Lescroart taught me to trust my own writing instincts, listen to what others have to say, but then call your own shots. In Protect and Defend by Richard North Patterson, I learned how one can effectively write about very timely, but very complex, legal and social issues and have the story resonate with a very wide readership. 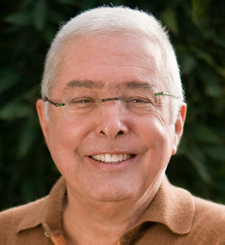 Described by his readers as a cross between Agatha Christie, Lee Child, and John Lescroart, bestselling author Ron Barak keeps his readers flipping the pages into the wee hours of the night. While he mostly lets his characters tell his stories, he does manage to get his licks in too.

To learn more about Ronald, please visit his website.