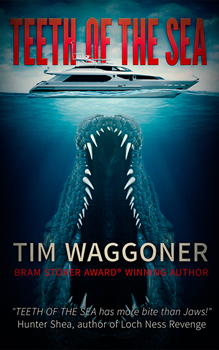 They glide through dark waters, sleek and silent as death itself. Ancient predators with only two desires – to feed and reproduce. They’ve traveled to the resort island of Las Dagas to do both, and the guests make tempting meals. The humans are on land, though, out of reach. But the resort’s main feature is an intricate canal system . . .

Prolific author Tim Waggoner took some time out of his busy schedule to discuss his latest thriller, TEETH OF THE SEA:

I hope readers will have a blast reading this fast-paced humans vs sea monsters adventure.

It’s not only a fun thriller in its own right, it’s also an homage to the B movies I loved as a kid, but modernized and cranked up to 11.

A number of scenes in the book are written from the point of view of the sea monsters. I thought I would have a difficult time writing these scenes as the monsters possess only a rudimentary animal intelligence. But their basic motivations — to kill, to eat, to maintain position in their hierarchy, to procreate — aren’t much different from any other type of characters. Characters have goals and work to achieve them. Once I focused on that, those scenes were as easy to write as any other.

For inspiration in writing the scenes where sea monsters fight each other, I watched my two dachshunds play fight.

When it comes to this kind of thriller, Peter Benchley was a huge influence. I read JAWS in fifth grade, right after seeing the movie. Grasping the very adult politics and character relationships in the book was a bit hard for me at that age, but it taught me that the real story is how the shark (or the serial killer, or the zombie apocalypse, or whatever) affects the people in the story. Good thrillers aren’t about the threat; they’re about how threats impact characters and how characters react to them. 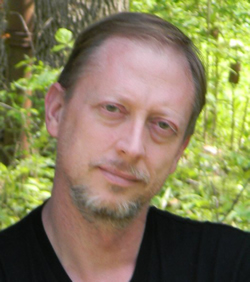 Tim Waggoner has published close to forty novels and three collections of short stories. He writes original dark fantasy and horror, as well as media tie-ins, and his articles on writing have appeared in numerous publications. He’s won the Bram Stoker Award, been a finalist for the Shirley Jackson Award and the Scribe Award, his fiction has received numerous Honorable Mentions in volumes of Best Horror of the Year, and he’s twice had stories selected for inclusion in volumes of Year’s Best Hardcore Horror. He’s also a full-time tenured professor who teaches creative writing and composition at Sinclair College in Dayton, Ohio.

To learn more about Tim and his body of work, please visit his website.