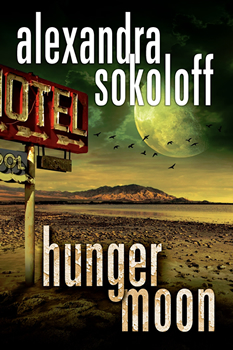 Special Agent Matthew Roarke has abandoned his rogue search for serial killer Cara Lindstrom. He’s returned to the FBI to head a task force with one mission: to rid society of its worst predators. But as the skeletal symbols of Santa Muerte, “Lady Death,” mysteriously appear at universities nationwide, threatening death to rapists, Roarke’s team is pressured to investigate. When a frat boy goes missing in Santa Barbara, Roarke realizes a bloodbath is coming—desperate teenagers are about to mete out personal, cold-blooded justice.

Hiding from the law, avenging angel Cara Lindstrom is on her own ruthless quest. She plans to stay as far away from Roarke as possible—until an old enemy comes after both her and the FBI, forcing her back into Roarke’s orbit. This time, the huntress has become the hunted…

The majority of crime novels and films and TV shows seem to revel in depicting women as victims. Well, it’s reality, isn’t it? Since the beginning of time, women haven’t been the predators – we’re the prey.

But after all those centuries, millennia, of women being victims of the most heinous crimes out there… wouldn’t you think that someone would finally say “Enough”? And maybe even strike back?

The Huntress series turns all those tropes of violence against women completely inside out. And aren’t we ready for that, especially now?

I’m writing a realistic series about an FBI team. Imagine how many times I had to revise to keep up with all the political madness going on. The unreality of it is grueling enough….

I’m particularly fond of the psychological horror/thrillers of Shirley Jackson, Mary Shelley, and Daphne du Maurier. Another very early influence of mine was Charlotte Perkins Gilman, whose short story “The Yellow Wallpaper,” about a woman’s descent into madness when confined to her room to rest from an “hysterical condition” by her physician husband, was an absolutely pivotal shift in my consciousness as a woman and a writer at the time that I read it.

What galvanized me about Shelley, Jackson and Gilman when I discovered them, growing up, was not just that they told ripping good scary stories, dripping with perverse sexuality and unnerving psychological insight, but that those stories were from an unmistakably and unrelentingly female point of view. About oppression and patriarchy and a kind of madness, but prophetic madness, that comes with always being the Other. 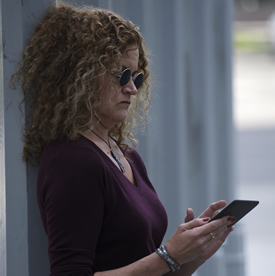 Alexandra Sokoloff is the Thriller Award-winning, Bram Stoker and Anthony Award-nominated author of twelve bestselling supernatural and crime thrillers. The New York Times has called her “a daughter of Mary Shelley” and her books “some of the most original and freshly unnerving work in the genre.” As a screenwriter she has sold original suspense and horror scripts and written novel adaptations for numerous Hollywood studios (Sony, Fox, Disney, Miramax), for producers such as Michael Bay, David Heyman, Laura Ziskin and Neal Moritz. She is also the author of the internationally acclaimed Screenwriting Tricks for Authors workbooks, based on her workshops and blog. Her Thriller Award-nominated Huntress Moon series follows a haunted FBI agent on the hunt for a female serial killer, smashing genre clichés and combating the rise of violence against women on the page and screen. The series is in active development for television with Sokoloff as writer/producer.