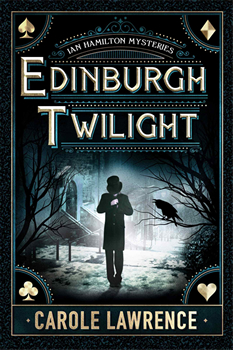 As a new century approaches, Edinburgh is a city divided. The wealthy residents of New Town live in comfort, while Old Town’s cobblestone streets are clotted with criminals, prostitution, and poverty.

Detective Inspector Ian Hamilton is no stranger to Edinburgh’s darkest crimes. Scarred by the mysterious fire that killed his parents, he faces his toughest case yet when a young man is found strangled in Holyrood Park.

With little evidence aside from a strange playing card found on the body, Hamilton engages the help of his aunt, a gifted photographer, and George Pearson, a librarian with a shared interest in the criminal mind. But the body count is rising. As newspapers spin tales of the “Holyrood Strangler,” panic sets in across the city. And with each victim, the murderer is getting closer to Hamilton, the one man who dares to stop him.

The Big Thrill had an opportunity to discuss EDINBURGH TWILIGHT with author Carole Lawrence:

I hope they are transported to 19th century Edinburgh, and come away with a sense of what it was like to live in that vibrant, culturally rich but dangerous city. I want them to have a thrill ride, get caught up in the story, but I’d love to spark curiosity and interest in Scottish history and lore. And hopefully one or two historical tidbits I unearthed will amuse them. And they may feel, as I do, how far we’ve advanced the cause of human rights, though we still have a ways to go.

Though 19th century London is a common setting for both books written in that time period and by contemporary writers, I hope by setting the story in Edinburgh I’ve opened a window into a society people don’t get to read about much. There are a number of thrillers set in contemporary Edinburgh, but I’m not aware of any historical thrillers taking place there. My story takes place during the birth of modern forensics – within a few years of my story, many things we take for granted today were just coming into common use, like fingerprints, for example.

As I delved into the history of Edinburgh and Scotland, I was astonished to learn about the so-called Edinburgh Seven, a group of women who were the first women to matriculate at a British university, in the fight to allow women to qualify as doctors in Britain. They were led by the amazing Sophia Jex-Blake – having discovered her, I plan to feature her prominently in the sequel, Edinburgh Dusk.

Also, true crime books by famous detectives were incredibly popular at the time, and no doubt influenced Conan Doyle when he began writing the Holmes stories.

My detective, Ian Hamilton, is a bit of a prodigy, developing his own method of profiling criminals psychologically. Also, he meets a certain young medical student at Edinburgh University, and in the sequel, they embark on some adventures in crime solving together. Ian resembles a certain fictional detective physically, and also happens to have a portly, lazy older brother who is equally brilliant but not nearly as driven as Ian. I invite you to draw your own conclusions.

I favor the Russians and Germans – not sure why, though I majored in German in school – but certainly Crime and Punishment continues to thrill me. Each time I read it I’m more impressed. So among my other faves are Leo Tolstoy, Thomas Mann, Heinrich Boll, Bertolt Brecht, Kafka, Gunther Grass, Chekhov. I guess I lean toward so-called classics. I also love Hugo, Voltaire, the Dumas, Melville, Hawthorne, Marquez, Flaubert, Poe, Wharton, Kate Chopin, Porter, Hemingway, Steinbeck, Lewis, Fitzgerald, and all the Brontes. And many, many more. I don’t want to mention any contemporary writers, though I enjoy many, because I’m afraid I’ll leave someone out!

And have to give a big shout out to Conan Doyle-he started it for all of us. 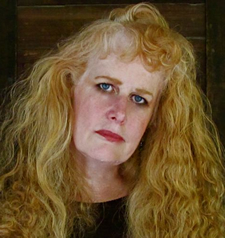 CAROLE BUGGÉ (CAROLE LAWRENCE) has eleven published novels, six novellas and several dozen short stories and poems. Many of her works appear in translation internationally. Winner of both the Euphoria Poetry Competition and the Eve of St. Agnes Poetry Award, she is a two-time Pushcart Poetry Prize nominee and First Prize winner of the Maxim Mazumdar Playwriting Competition, the Chronogram Literary Fiction Prize, Jerry Jazz Musician Short Fiction Award, and the Jean Paiva Memorial Fiction Award. She was a finalist in the McClaren, MSU and Henrico Playwriting Competitions, as well as the Samuel French One Act Play Competition. Her play Strings was nominated for a New York Innovative Theatre Award, and was recently produced at the Kennedy Center. It is now in development with the Pulse Theatre in Manhattan. She is the recipient of a monetary grant from Poets and Writers, a new York State Art Council grant, and a grant from the NEA to read her work at Lincoln Center.

Her plays and musicals have been presented in New York City at The Players Club, Manhattan Punchline, Pulse Theatre, The Van Dam Street Playhouse, Love Creek, Playwrights Horizons, HERE, the Episcopal Actors’ Guild, the Jan Hus Theatre, Lakota Theatre, The Open Book, The 78th Street Theatre, Genesius Guild, the 14th Street Y, Stageplays, and Shotgun Productions, as well as internationally, including the Alleyway Theatre, the Fairfield Theatre, Mountain Stage, ICS Theatre, The Bay Street Theatre, Actors and Writers, and the Byrdcliffe Theatre, the Marc Grogan Theatre in Carlow, Ireland, the Four Elms in Kent, UK, and the Stage Stars in London. She was sponsored by The Paper Mill Playhouse for a TCG Playwriting Award two years in a row, and was a Playwriting Fellowship finalist at Manhattan Theatre Club.

She was recently the Featured Composer in the “Songbook Series” in New York City, presented by John Znidarsic, director of Arts & Artists at St. Paul. Her short radio plays have appeared on NPR, and she has written articles and reviews for various periodicals, including Habitat, H.P. Lovecraft Magazine, Sherlock Holmes Magazine, The Writer, Publisher’s Weekly, The Third Degree and Suspense Magazine. She is a magna cum laude graduate of Duke University, where she also studied music, theatre and German, graduating with honors in English literature. She is a Featured Poet in China Grove Literary Magazine, a Fellow of Hawthornden International Writers Retreat, and Writer in Residence at Byrdcliffe Art Colony. She is on the faculty of NYU and Gotham Writers Workshop, as well as the Cape Cod Writers and San Miguel Writers Conferences. She is a member of the Dramatists Guild, Authors Guild, Sisters In Crime, International Thriller Writers, and Mystery Writers of America.

September 18 - 24: "What are some other countries that might take center stage in the future?"