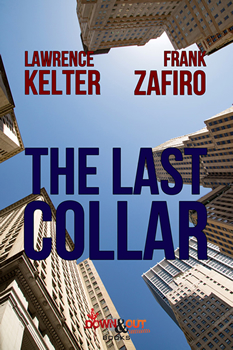 The demons that drive John “Mocha” Moccia to obsess, to put absolutely everyone under a microscope, and scratch away at every last clue, make him the best hardnosed detective in Brooklyn homicide. But these same demons may very well write the final chapter in his career.

He isn’t the kind of detective to take no for an answer, but in his most recent case answers are damn hard to come by. Partnered with the conscientious Detective Matt Winslow, Mocha endeavors to solve the murder of the wealthy and beautiful Jessica Shannon, a woman who had every reason to live.

As Mocha and Winslow strive to push forward the hands of time and solve the murder, their imposing lieutenant breathes down their necks, suspects are scarce, and all of the evidence seems to be a dead end.

With the last precious grains of sand falling through the hourglass, Mocha pushes ever forward, determined to make an arrest, even if it means this collar will be his last.

More than anything, we hope that they will be engrossed in a different world for a few hours, and care about the people in that world. If the idea that we have to live each day to its fullest lingers afterward, that’d be even better.

Realistically, it is another book stacked onto a very high pile of gritty procedurals, and it adheres to most of the tropes of that genre. One thing that is new is the particular voice of John Mocha. It is neither Larry’s nor Frank’s, but a hybrid that neither could have created alone. Since it is said there are no new stories in the world, it is the voices that must ring anew.

The discovery was that it is possible for two writers to write a single first person character and discover a separate, shared voice. In the past, all of Frank’s collaborations with other authors utilized a two protagonist, alternating chapter, first person viewpoint. That method worked well, and provided the reader with two distinct voices throughout the novel. Frank had grown comfortable with that formula, and was a little apprehensive of Larry’s proposed format—a single, first person narrator that both of them would pen. The result was a very pleasant surprise for them both.

Though it is a murder mystery and solving that mystery is what drives the action, the book is at its heart a personal journey. What matters most in this life? is a question that gets asked in the undercurrent, not entirely drowned out by the perennial question in this genre, Who did it? We wanted to explore large stakes in terms of the mystery and in terms of the narrator’s own life, Mocha’s triumph of human will, to survive adversity and confront the inevitable.

For Larry, it’s the works, the masterpieces scripted by big names and small: The Silence of the Lambs, The Last Detective, Misery, The Gold Coast, Presumed Innocent, The Black Dahlia, Devil in a Blue Dress, and all the treasures he wishes there was space to mention.

Frank was influenced by a lot of sci-fi and fantasy as a young man (Ursula K. LeGuin, Frank Herbert, and of course, Tolkien), by Stephen King as an adult, and by such great crime writers as Elmore Leonard, Richard Stark, and Lawrence Block. More recently, he has come to admire Dennis Lehane’s beauty of language, G.R.R. Martin’s penchant for massive scope through the eyes of the individual (as well as being willing to kill off anyone for the sake of the tale), and Steve Hamilton’s economy of character. The why of it is simple enough—because all of these authors can be enjoyed as reader first, and as an admirer of craft second…and you can learn something in both cases.

Lawrence Kelter never expected to be a writer. In fact, he was voted the student least likely to step foot in a library. Well, times change, and he has now authored several novels including the internationally best-selling Stephanie Chalice, and Chloe Mather Thriller Series.

Frank Zafiro was a police officer in Spokane, Washington, from 1993 to 2013. He retired as a captain. He is the author of numerous crime novels, including the River City novels and the Stefan Kopriva series. This is his first novel with Lawrence Kelter. In addition to writing, Frank teaches leadership and other law enforcement topics to police officers and college students alike. He lives in Redmond, Oregon with his wife Kristi, dogs Richie and Wiley, and a very self-assured cat named Pasta. He is an avid hockey fan and a tortured guitarist.