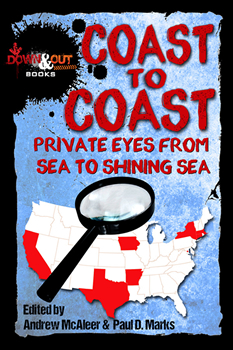 Hardboiled. Softboiled. Noir. East Coast. West Coast. And all points in between.

Whatever you call them, gumshoe, shamus, Pinkerton, detective, private eye, P.I., shadow, tail, investigator, and wherever you need them, from East to West, North to South. They’re all here.

COAST TO COAST: PRIVATE EYES FROM SEA TO SHINING SEA features suspense stories ranging from hardboiled to psychological to thrillers. And while these stories differ in locale, climate, mood and tone, they all resonate with the dark underbelly of crime.

What do you hope readers will take away from this book?
That they’ll discover or rediscover the art of short detective fiction and discover a plethora of modern/current writers in that genre.
How does this book make a contribution to the genre?
It introduces people to writers they may not have read before, even though many of the writers in this collection have won or been nominated for major awards from the Shamus to the Macavity, Anthony and Edgars, etc. It promotes the private eye genre by bringing new stories to light and showing a variety of different types of detectives in locations across the country.
Was there anything new you discovered, or surprised you, as you wrote this book?
That the private eye genre is not old or stale; there’s endless possibilities and fresh ideas to be read and enjoyed. And it shows how many great short story writers and great detective/private eye stories are out there.
No spoilers, but what can you tell us about your book that we won’t find in the jacket copy or the PR material?
Not all private eyes have a bottle of bourbon next to the .45 in their bottom desk drawer…but some writers do.
What authors or books have influenced your career as a writer, and why?
It’s hard to answer for an anthology of various authors, but as one of the editors and contributors, some of my influences have been Raymond Chandler, Ross Macdonald. David Goodis. Hammett. The classic mystery/private eye/noir writers. Why: because I want to bring a modern sensibility to what they began. They’re classic and remembered for a reason, ‘cause they’re great.

Paul D. Marks pulled a gun on the LAPD…and lived to tell about it. Which makes him uniquely qualified to write mystery and noir stories. Paul’s novel White Heat won the Shamus Award from the Private Eye Writers of America. Publishers Weekly calls White Heat a “…taut crime yarn.” Midwest Book Review says: “White Heat is a riveting read of mystery, much recommended.” Paul’s story “Howling at the Moon” is short-listed for both this year’s (2015) Anthony Award and Macavity Award for Best Short Story. It was published in the November 2014 issue of Ellery Queen Mystery Magazine and came in #7 in their Reader’s Poll Award. His latest noir-thriller, Vortex, will be out in summer, 2015. LA Late @ Night is a collection of five of his previously published short stories. He also has the distinction, dubious though it might be, of being the last person to have shot a film on the fabled MGM backlot before it bit the dust to make way for condos. According to Steven Bingen, one of the authors of the well-received book MGM: Hollywood’s Greatest Backlot: “That forty-page chronological list I mentioned of films shot at the studio ends with his [Paul D. Marks’] name on it.”

Andrew McAleer is the editor of Crimestalker Casebook and best-selling author of seven books including the 101 Habits of Highly Successful Novelists, A Miscellany of Murder, Fatal Deeds, and Mystery Writing in a Nutshell, which he co-authored with his father, Edgar winner John McAleer. Past president of the Boston Authors Club, Mr. McAleer teaches at Boston College and works in public service. He is a winner of the Sherlock Holmes Revere Bowl Award. As a sergeant in the U.S. Army, he served in Afghanistan as a Combat Historian. He is also a commissioned Kentucky Colonel.