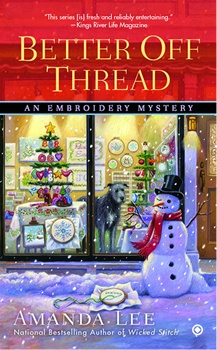 This time, Marcy takes a break from her shop during the holidays to play elf while her friend volunteers to be Santa at a local hospital. Celebrations sour when the hospital’s administrator is murdered and evidence points to Santa—and it’s up to Marcy to unravel the truth before the real killer strikes again.

Leerecently sat down with The Big Thrill to chat about her latest novel and her incredible journey to publication.

Congratulations on the publication of BETTER OFF THREAD. No spoilers, but what can you tell us about your book that we won’t find in the jacket copy or the PR material?

Thank you so much! There are a few new characters introduced in this book, and one of them in particular makes Marcy pretty nervous.

I hope the mystery is well entwined with the magic of the holiday season and that the readers enjoy both. I had so much fun writing this book.

I was at a signing with the best Santa Claus I’d ever seen (in fact, I give him a shout-out in the acknowledgements). When he was approached by a child, he’d ask the child’s name. When the child answered, Santa would say something like, “Jeffrey! Of course, it’s you! You’ve grown so much since last year that I didn’t recognize you at first.” So I incorporated this technique into Captain Moe’s Santa.

Kings River Life Magazine has said the following: “Lee has mastered the art of crafting very likable characters who are eccentric, lovable, and definitely people readers will enjoy.” In the Embroidery Mystery series, Marcy Singer is the owner of an embroidery specialty shop—and an amateur sleuth. Can you tell us a little more about Marcy and some of the elements of her past that have made her the woman she is today?

First off, hugs and kisses to KRL for saying that. Marcy had an unusual upbringing. Her mother was a Hollywood costume designer, so Marcy got to meet a lot of interesting people as she was growing up. That’s a fun aspect of Marcy’s character I can draw on from time to time. For instance, in one book in the series—The Stitching Hour—she finds herself surrounded by snakes. She calls on the knowledge of snakes that she learned from an animal trainer’s son she befriended when their parents were working on a movie together. In BETTER OFF THREAD, Marcy incorporates another skill one of her mother’s friends taught her.

I also think that because of her mother’s job—her mother often had to leave her to go on location, etc.—and the fact that Marcy’s dad wasn’t in the picture, Marcy has a strong independent streak. Despite that—or perhaps because of it—she has really embraced the people of Tallulah Falls. She adores her mother, but she has found an extended family within the town.

When writing, are there any themes you find yourself drawn to again and again?

I’m not so sure it’s a theme, per se, but I like writing strong women who can get themselves out of bad situations. It’s funny that in the embroidery series, Marcy has all these people who care about her and want to protect her: her boyfriend Ted, her friend Todd, and her friends Blake and Sadie—and although she appreciates their concern, she lets them know she’s capable of taking care of herself. I think that, like Marcy, we all want to feel that we have people we can depend on—who will maybe even swoop in and save the day—but, ultimately, we want to be the hero.

You’re the author of multiple popular mystery series (under three different pen names) as well as a standalone novel.  Please share with us a little about your writing journey. What’s your writing process like now? Has it changed over time?

I started out writing for small presses. Then I started my own publishing company called Grace Abraham Publishing. When I formed Grace Abraham, I thought I knew just about everything there was to know about book marketing. As the old saying goes, I had another think coming. Not only was this whole marketing and promotion thing more intense than I’d originally thought, it was constantly changing. I also found that my some of my authors—I had a nonfiction and a mystery fiction line under the imprint Dark & Stormies—either didn’t know how to promote themselves and their books or they didn’t want to. I was spending most of my time designing web pages, preparing press releases, and setting up events instead of writing. So I shut down Grace Abraham.

Afterwards, I was more determined than ever to become published by one of the Big Six (at that time, there still were six major publishing houses). So I began querying agents. I knew so much more by this time than I had when I was publishing with small presses. Now, not only was I a published author, I truly understood the importance of marketing and the impression a solid marketing plan would have on an agent. I was even able to show them where the Dark & Stormies line had been featured in Woman’s Day magazine’s Halloween giveaway issue.

That said, I landed my first agent. She was wonderful, and she managed to get me through the door at NAL with the embroidery series. I now write cozy mystery series for NAL/Penguin Random House under the pseudonyms Amanda Lee (the embroidery series) and Gayle Leeson (the Down South Cafe series). I write the cake decorating cozy mystery series under the name Gayle Trent (that series has been with Bell Bridge, Simon & Schuster, and is now self-published under the Grace Abraham name).  I also write the self-published Myrtle Crumb series as Gayle Trent, and I’ve written standalones as G. V. Trent and as Gayle Trent.

I have so many pen names now that my new motto is, “An author by any other name might still be me.”

As far as my writing process goes, I typically do a bare bones outline or synopsis and then fill in as I go. I’m always trying to get better and will sometimes try out new techniques to see how much they help. I’m currently testing the Save the Cat method. I’ll have to let you know how it works out!

I always write in my living room…usually with my dog at my side.

Don’t give up. As you can see from my writing journey, persistence really is the key.

What can readers look forward to next?

Next up is Silence of the Jams, book two in the Down South Café mystery series. In this book, it’s Independence Day in Winter Garden, Virginia, and the residents are gearing up for their annual celebration. The Down South Café is open and flourishing, and Amy Flowers is busy making pies and cakes for the holiday. The only thorn in her side is Chamber of Commerce director George Lincoln, who is trying to buy the café so he can tear it down and build a B&B on the site.

When George collapses while eating at the Down South, everybody assumes it’s a heart attack—until the autopsy declares it to be poisoning. Now, it’s up to Amy to prove her innocence before her liberty is lost. As with the other books in the series, Silence of the Jams includes some tasty Southern recipes. 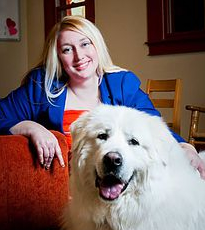 Amanda Lee is the national bestselling author of the Embroidery Mysteries, including The Stitching Hour, Wicked Stitch, and Thread End.

To learn more about Amanda Lee, please visit her website.