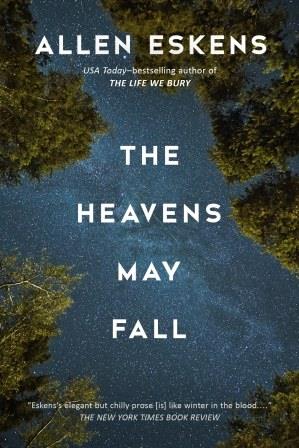 What is the price of justice? That is the question posed in Allen Eskens’s new novel, THE HEAVENS MAY FALL. In the case of two longtime friends, detective Max Rupert and attorney Boady Sanden, the price may be too high to bear. Max is convinced that Genevieve Pruitt was killed by her lawyer husband, Ben Pruitt.  Boady, having worked with Ben in the past, is equally convinced of his innocence. In the normal course of a murder investigation, their difference of opinion would matter little.  But in this particular case, tragic circumstances from both men’s pasts will make it hard for them to maintain their professional objectivity.

Max Rupert is still struggling with the death of his wife four years earlier, and the mysterious nature of the Pruitt murder has stirred up painful memories for him. Meanwhile, Boady Sanden hasn’t tried a defense case in years, ever since the death of an innocent client, a man Boady believes he could have saved but didn’t. Now, he returns to court in hopes of redeeming himself for his past failure. But to reach a successful verdict, Boady may have to expose the pain of Max’s loss, which could endanger their friendship forever. It’s the type of delicious conundrum that keeps the story moving and the reader guessing.

THE HEAVENS MAY FALL is Allen Eskens’s third novel, and it shows. The story is told with a taut and realistic style honed by his previous two best-sellers, The Life We Bury, and The Guise of Another.   THE HEAVENS MAY FALL is a sequel of sorts, reintroducing three characters from The Life We Bury.  The story is told through the unique perspectives of Max and Boady.  This change in point of view gives the reader an intimate sense of each character’s logic and illustrates how context and bias can lead to wildly different conclusions about guilt and innocence. Allen keeps readers guessing until the last possible moment.

As a practicing defense attorney, Allen Eskens brings a reality to the story in the best tradition of other practicing legal thriller authors like Scott Turow or John Grisham. His journey from lawyer to writer took a circuitous path.  Growing up in the hills of central Missouri, Allen’s propensity for writing was first noted by his first grade teacher when she wrote an assessment to his parents saying, “Allen daydreams too much when work needs to be done in school.”

Allen was constantly daydreaming, plotting stories and characters in his head. This continued into high school, when he got an assignment to write his first short story.  He wrote down one of his many daydreams and turned it in. The story received a grade of A, and prompted the teacher to ask him if he had ever thought about writing for publication.  At the time, Allen was not planning to attend college and shrugged the suggestion off, but those words stayed with him.

His career path seemed destined to follow in his father’s footsteps–running the family’s contracting business–but after many days and weekends of hanging drywall, Allen concluded that a college degree might be a better alternative.  He attended the University of Minnesota and obtained a journalism degree and, eventually, a law degree from Hamline University. College rekindled his desire to put his daydreams to paper. He studied creative writing in the M.F.A. program at Minnesota State University-Mankato, the Loft Literary Center in Minneapolis, and the Iowa Summer Writer’s Festival.  He became a member of the Twin Cities Sisters in Crime.  That study resulted in two award winning novels. THE HEAVENS MAY FALL promises to continue that trend.

How do you find the time to practice law and write?

The two tasks are actually complementary. Each legal defense case requires me to dissect the facts and identify flaws and holes in the narrative.  I can translate that skill directly into the plot twists of my legal thrillers. I love writing thrillers because I can take my daydreams and focus them and make them more complex. As a writer, you’re there to tell a story that evokes emotion and understanding. If the reader walks away with something in their heart, not just in their head, after they read one of my novels, then that’s the goal. You don’t always hit the mark, but that’s what you shoot for.

How difficult was your journey to publication? 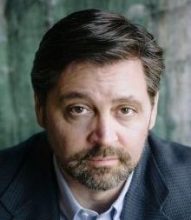 Allen Eskens is the USA Today best-selling author of The Life We Bury, The Guise of Another, and THE HEAVENS MAY FALL. He is the recipient of the Barry Award, Rosebud Award, and the Silver Falchion Award and has been a finalist for the Edgar Award, Thriller award, Anthony Award, and the Minnesota Book Award. His debut novel, The Life We Bury, has been published in 16 languages and is being developed for feature film. For the last 25 years, Allen has practiced law in Minnesota where he lives with his wife, Joely.

Author, futurist, and social media evangelist, Kent Lester writes fiction and non-fiction.  His debut hardcover thriller, THE SEVENTH SUN, will be published by Macmillan-Forge in April of 2017.  Kent writes “near fiction,” science-based stories rooted in the present or near future.  His writing explores history, social behavior, and how the world works.