A Journalist on the Hunt for a Killer 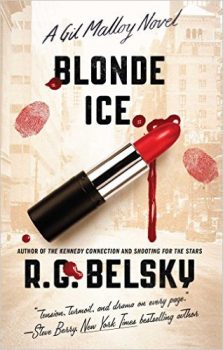 R.G. Belsky knows his way around a newsroom.

Now, with the release of the new book in his Gil Malloy mystery thriller series, Belsky deftly demonstrates that he also knows his way outside of the newsroom, delivering another gripping story featuring his hard-driving reporter with a penchant for breaking stories on the front page of the New York Daily News.

In BLONDE ICE, Malloy is inadvertently caught up in the hunt for a devious killer—a fair-haired femme fatale who is killing men for thrills.

“Serial killers are such a staple of so many things,” Belsky says. “But one thing I noticed—especially in fiction—is that there are so few women serial killers. I thought it was a fresh concept.”

Definitely, though writing about women is almost old hat to Belsky, whose previous works have included several female characters, often in a lead protagonist role.

“I find writing about women easier in some ways,” he says. “I had a lot of fun putting myself in the character’s head space. It makes it more unique, and the story flows better. If the writing was hard, I wouldn’t want to write the book.”

To loosen the process, Belsky begins with excellent character development, which is what he first looks for when reading the works of his peers. Once settled into point—or points—of view, Belsky is ready to take his cast on an epic journey of twists and turns that ultimately shape the plot.

But equally as important to Belsky is authenticity. In the September issue of The Big Thrill Belsky busts newsroom myths in the “Get it Right” column, imparting wisdom gleaned from his extensive career in newspapers, magazines, and TV/digital news, and giving credibility—not to mention some fresh interest—to an ever-evolving industry directly impacted by technological and societal advances.

“In BLONDE ICE, I try and deal with the changing world of the newspaper industry,” he says. “I didn’t want to get too deep into it, but there’s no way not to do it. A lot of people still think it’s like All the President’s Men or the most recent Spotlight.”

Belsky is confident he nailed the newsroom facts—though reminds us the books are works of fiction—but admits he worries a little about geographical things, such as bus routes, important monuments, or, in the case of BLONDE ICE, the exact location of the newsroom—which in real life had moved in the time he’d begun writing the novel.

Other than that, Belsky says he isn’t at risk of getting lost down the research rabbit hole—most often he writes “about things I know. And because of my background, I’ve got an advantage.”

Not that it always pans out. Belsky recalls a debate with an early editor of his work who took offense to the casual dress of his female protagonist. He amended the reporter’s attire, giving her a more formal look—and then proceeded to take heat from his colleagues about the ridiculousness of her clothes.

“Authenticity can be fun,” he says. “But the key is to always be confident. You can pull most things off in a fictional way, and it’s true that sometimes truth is stranger than fiction.” For example, Belsky was an editor at the New York Post when the headline “Headless Body in Topless Bar” became famous. “It was like the Night of the Living Dead of headlines. You can’t make that stuff up!”

Much to his readers’ delight, Belsky continues to “make stuff up,” with the hopes of continuing his Gil Malloy series indefinitely—or at least until someone shouts, STOP THE PRESSES! Lucky for us, those words are only ever uttered in the movies. 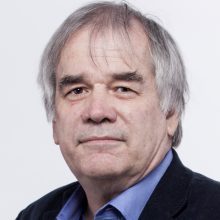 R.G. Belsky is an author of crime fiction and a journalist in New York City. His new suspense thriller, BLONDE ICE, will be published by Atria on October 18, 2016. It is the latest in a series of books from Atria featuring Gil Malloy, a hard-driving newspaper reporter with a penchant for breaking big stories on the front page of the New York Daily News. The first book in the Gil Malloy series – THE KENNEDY CONNECTION – was published in 2014 and SHOOTING FOR THE STARS came out in 2015. Belsky himself is a former managing editor at the Daily News and writes about the media from an extensive background in newspapers, magazines and TV/digital news. At the Daily News, he also held the titles of metropolitan editor and deputy national editor. Before that, he was metropolitan editor of the New York Post and news editor at Star magazine. Belsky was most recently the managing editor for news at NBCNews.com. His previous suspense novels include PLAYING DEAD and LOVERBOY.