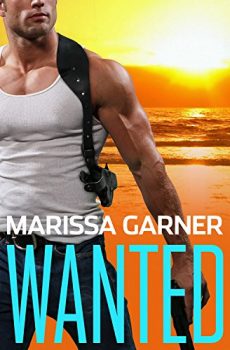 Marissa Garner is celebrating the release of WANTED, the third book in her sexy, edgy FBI Heat series. Although each story stands alone, readers will enjoy reconnecting with several favorite characters from Hunted and Targeted.

In WANTED, Special Agent Dillon O’Malley teams up with a fascinating heroine, Kat MacKenzie, the woman who left him at the altar (literally) two years ago. The thrilling action revolves around the sabotage of a nuclear power plant, but readers will also be holding their breath to see if Dillon discovers why Kat originally abandoned him, and whether their second chance at love will lead to a happy ending.

Like Hunted and Targeted, WANTED required careful balance of the suspense and romance. Garner’s editor—who’s been in publishing far longer than the author—called the story not just good, but great. As is characteristic of this series, the subject matter is uncommon in the romance genre. Computer hacking and nuclear power plant sabotage are subjects more often considered by national security experts than found between the covers of a romance novel. As Garner’s tagline says, she writes “romance to titillate your mind as well as your libido.”

Most authors have fascinating anecdotes about research for their books. Garner is no exception. If she didn’t attract the FBI’s attention with her in-depth questions and Internet searches about dirty bombs and Muslim clothing for Targeted, she figures her research into nuclear power plants and computer hacking definitely put her on someone’s radar. When she toured a nuclear power plant, she was careful not to mention that she was more interested in weaknesses susceptible to sabotage than in normal operating procedures. She still expects to find men in black suits and shades on her doorstep one of these days.

The computer hacking aspect of the plot also required significant research since Garner is not far above Luddite status when it comes to technology. Thankfully, she has a knowledgeable, in-house consultant (i.e. her husband) who has worked in IT for many years and is used to explaining technology to her in the simplest English terms. The real-life hacking incidents making the news lately have certainly increased the believability, if not the possibility, of the scenario she created in WANTED.

What’s next for Garner? She’s writing a fourth book in the FBI Heat series based on the hijacking of a cruise ship. Although she already has cruising experience, she and her husband are convinced that a South Pacific cruise will be a necessary part of her research.

In the meantime, she is planning to self-publish her paranormal romantic suspense, Forbidden Love, which germinated during her trip to the Mayan ruins in Chichen Itza and Tulum, Mexico. Readers can expect more of her “research” travels to end up in her future novels.