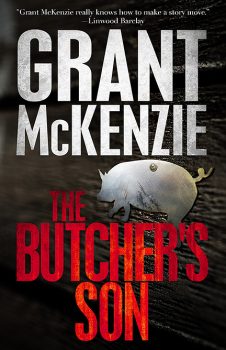 Grant McKenzie’s book blurbs read like a Who’s Who in the thriller world, earning high praise from the likes of Lee Child, Tess Gerritsen, and Andrew Vachss, just to name a few. Naturally I picked up his latest, THE BUTCHER’S SON, with high expectations.

It didn’t disappoint. The voice is strong, a distinctive blend of blunt force and poetry that perhaps should come as no surprise from a man who grew up in Scotland, lives in Canada, and is currently writing about a child protection officer living in Oregon.

Asked about his writing journey, McKenzie says he was always naturally curious and imaginative, fascinated with the “What If” hook of mysteries. As a child, he devoured Enid Blyton’s Famous Five YA mystery series and eventually, around the age of ten or so, wrote a Whodunit play based on the cartoon show Hong Kong Phooey.

“The play starred my best friend at the time,” he says. “While I wrote and directed and took on the sidekick role and made props.” He kept writing his “wee stories” (plays, poetry, short stories, first novel, etc.) and eventually went to work the Dead Body Beat at a local tabloid. He was 19, and it was the beginning of a 30-year journey in journalism.

“My published fiction has grown from my time as a journalist,” McKenzie says. “Bearing witness to the crime, injustice, damage, and cruelty that people do to each other on a daily basis. As a reporter, I was an observer; as an author, I can take action.”

This month, McKenzie agreed to answer a few questions for The Big Thrill about his writing and in particular, his new book.

Why don’t we start with a little bit about THE BUTCHER’S SON? What was the inspiration for it?

The inspiration for the story really came from an image I had of a butcher’s leather apron (that was actually the working title of the book, The Butcher’s Apron) and what that imagery might mean to a young, working class boy. I often start with a mental image, frozen in time, like a piece of art that I can examine from all sides. I also wanted to explore both Ian’s troubled past and his troubled present, especially in light of the trials he goes through in The Fear in Her Eyes and how that ordeal changes him at his core.

This book starts with a can’t-put-it-down hook and the tension just keeps rising. How do you infuse each chapter with that kind of suspense?

I grew up in Scotland where I loved attending the Saturday Movie Matinees where they showed a half-dozen cliffhanger shorts before the main feature. It was so much fun to have the serial end with somebody sinking in quicksand and not knowing if they would survive until the following week. Those cliffhangers always sparked my imagination and I would go home and write stories about what might happen and how the hero would survive. I try to write my books in a similar way, making it fun and exciting for both myself and the reader.

It seems to have worked. Your books are known for their heart-pounding pacing and suspense. Do you ever surprise yourself?

I love to amp up the stakes for my characters, to test their limits and see what they’ll do. I become so involved in their lives that I often forget I’m the one writing the plot. I remember when I was writing my novel K.A.R.M.A., and I got so upset that a character I loved was killed on the page. To a non-writer this would seem silly, as the author has the power to change the scene, but that’s not really true. A good story lives and breathes through its characters, and in order to stay true to the story, sometimes those characters die. By allowing the stakes to get that high, and cutting the god-like strings of the creator, you naturally create a story where anything can happen.

THE BUTCHER’S SON explores the lines between good and evil, compassion and brutality, revenge and redemption. How did you weave these themes into the narrative (or emphasize them once you discovered them)?

I love to walk that fine line between hero and villain. I work with the homeless and impoverished community in Victoria, and the stories I hear from people struggling with addiction, mental health problems, and poverty would curl your toes. I know that evil exists, I see it and feel it every day, but fortunately so does compassion and kindness. Nothing is black and white, and people are very complex. As a writer, I often feel things too deeply, but if I can bring that to the page, I believe it makes the narrative that much more powerful.

What’s most interesting thing you’ve ever done while researching a book?

Research is a natural offshoot of my curious nature. I like to know how things work, and I love to discover the hidden stories that lie in our history and in everyday lives. When researching Speak the Dead, I had some eye-opening and downright hilarious moments with a group of mortuary beauticians as I probed them to reveal their Beauty Tips for the Dead.

Any advice for aspiring and pre-published writers?

The best advice I can give is stick with it. The more you write, the better you become. My first published novel was the sixth novel I wrote. I credit being published as much to stubbornness as to talent.

What’s next? Will we see more of Ian?

As usual, I don’t have a publishing contract for the next book. However, I have a very intriguing  idea brewing in the back of my mind that I believe would be a good fit to continue Ian’s journey. We’ll see. 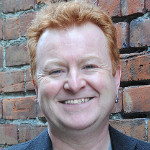 Grant McKenzie’s edge-of-your-seat thrillers have been published in the UK, Germany, Taiwan, Canada, the U.S., and China. He has been praised by such crime luminaries as Lee Child, Linwood Barclay, Tess Gerritsen, Ken Bruen, and Andrew Vachss. The Butcher’s Son is his tenth novel.