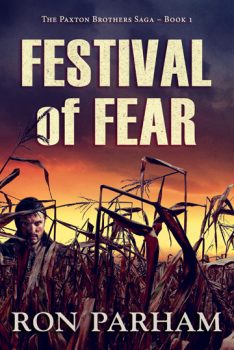 Molly’s Moon, my first published novel released in 2014, takes place during 9/11, in 2001. It follows Ethan Paxton as a businessman in his early forties that was stuck in Europe when the World Trade Center buildings came down. With America’s airports closed for days, he had to find a way to get into Mexico where his teenage daughter had been kidnapped by sex traffickers.It’s a fast-paced thriller with multiple points-of-view, including that of the kidnapper and the kidnapped daughter. My second novel, published in 2015, was Copperhead Cove, which takes place in 2003, two years after Molly’s Moon. Ethan Paxton is now in his mid-forties, helping his older brother, Bo, through a nightmare involving the Chicago mob, dead college basketball coaches, deadly snakes and all sorts of redneck characters.

Got it yet? Here’s where it gets a little weird, and hopefully interesting. My third novel, FESTIVAL OF FEAR, takes place in 1962, during the Cuban Missile crisis, when the fear and anxiety of the Cold War has the entire country on edge. Ethan Paxton, only three years old, is the youngest child of Clint and Eloise Paxton, who live in a small town in southwest Iowa. Ethan has two older brothers. Bo, who we met in Copperhead Cove, is seven, and oldest brother Nick, a new character to the series, is fifteen, a sophomore in high school and a football star. He is in love with a pretty blonde cheerleader who, unfortunately, is targeted as the next victim of a serial killer of young teenage girls that has been terrorizing the area. Nick is the protagonist, with his football coach, John Walters, playing a prominent role. Little Ethan and Bo are in the background, doing what small children do, even during a crisis. But their personalities are showcased so that the reader of the first two novels can relate to them. Like I said before, it’s a prequel to the first two novels.

The Paxton Brothers Saga can be read in several different ways. Many readers have already read Molly’s Moon and Copperhead Cove, so they are very familiar with Ethan and Bo Paxton. Reading FESTIVAL OF FEAR will be like going back in time to see the two brothers as children. It remains to be seen how this will resonate with my readers. Or, for new readers to the series, they can begin by reading FESTIVAL OF FEAR, which is “officially” book one in the Paxton Brothers Saga, and read the series in chronological order of the brother’s lives. A third possibility, and completely okay, is to read each novel as a stand-alone story. Molly’s Moon and Copperhead Cove were written as stand-alone novels, with no regard to an eventual series. However, when my idea for FESTIVAL OF FEAR began to germinate, the follow-up idea of making the three novels a series hit both my publisher and I square between the eyes. There will be more novels in The Paxton Brothers Saga in the future. Maybe there will be a sequel to FESTIVAL OF FEAR (but a prequel to the other two novels) following Nick Paxton, or maybe it will be a continuation of the Ethan Paxton character as a grown man in his forties, but that is for another day.

All three novels in The Paxton Brothers Saga are based upon my personal experiences, fictionalized of course. For instance, I grew up in southwest Iowa in the fifties and sixties with two brothers, and played football. Fortunately, my childhood was devoid of a serial killer prowling the cornfields of Iowa. I remember the Cuban Missile crisis well, and still remember the fear that invaded my mind whenever we had to dive under our desks at school. Much of FESTIVAL OF FEAR was taken from my personal experiences growing up in Iowa.

Also, I was actually in the Netherlands on 9/11, on a routine business trip, and found out about the terrorist attacks while walking through Amsterdam Schiphol Airport, just as Molly’s Moon portrays. My two children really did build homes in Baja Mexico each year as a school project, but, thankfully, my teenage daughter was never kidnapped, although I worried about that each time she traveled to Mexico.

And finally, my older brother Roger really was a fishing guide on a large lake in Kentucky, where Copperhead Cove takes place, and one day took two famous college basketball coaches out for a day of fishing and drinking. Thankfully, the Chicago mob was nowhere to be seen, but the idea of one of the coaches shaving points and getting the mob after him began to germinate in my mind years before I wrote the novel. The deadly copperhead and cottonmouth snakes were an addition.

I have a second series entitled The Gas Lamp Saga, starring the private investigator in Molly’s Moon and Copperhead Cove. Jake Delgado is a run-down, disgraced PI who drinks too much, but is a bulldog once he’s on a case. My next novel after FESTIVAL OF FEAR will be entitled Avenging Angel and will be the first novel in The Gas Lamp Saga. It is shaping up to be a real page-turner, like the others. It is a sequel to Molly’s Moon, but more on that later. Happy reading! 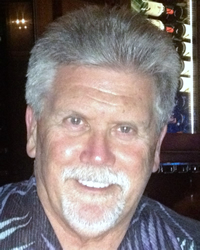 Ron Parham is an accomplished and award-winning author of thrillers Molly’s Moon and Copperhead Cove, and the upcoming Festival of Fear, due out in the summer of 2016. His novels are about ordinary people caught up in extraordinary circumstances. Festival of Fear takes place in southwest Iowa, where he grew up and spent his childhood. All three novels are part of the Paxton Brothers Saga. He now lives and writes in the Temecula Valley, a world-famous wine-growing region just east of Los Angeles and north of San Diego. He is currently working on his first novel of the Gas Lamp Saga, starring Jake Delgado, the private investigator from his first two novels.