Inspired By Real-Life Corruption and War 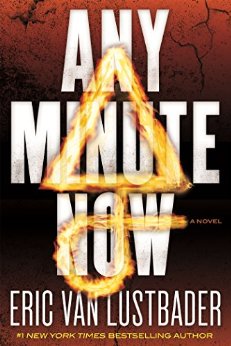 From the prolific author of the Bourne series comes a new standalone thriller, ANY MINUTE NOW, a dark tale ripped from the headlines and inspired by Eric Van Lustbader’s fascination with the occult, the continuing war in the Middle East, and the “terrible price soldiers are asked to pay.”

“The ongoing corruption obscured by the fog of war both frighten and anger me,” he says.

ANY MINUTE NOW kicks off with Red Rover, the blackest of black ops teams, losing one of its own on a top-priority mission. The group is unexpectedly disbanded, leaving Greg Whitman and Felix Orteño to replace their lost team member with Charlize Daou. Daou, a brilliant and talented arms expert, becomes the team’s moral compass, helping Whitman and Orteño face the supernatural darkness into which she feels they have fallen.

“Charlize is a reflection of me, or perhaps part of me” says Lustbader. “I felt myself in every line I wrote for her. She’s very smart, damaged, and under-appreciated, except by the one person she truly loves. She’s a hero for our time.”

Against orders, the resurrected Red Rover team secretly hunts a protected Saudi terrorist, throwing them into the heart of a conspiracy involving the government, the Alchemists (a cabal of wealthy mystics), and a visionary striving to create a new way of waging war that could destabilize the world’s greatest superpowers.

For fans of the classic Bourne books, be assured that Lustbader is far from done with them.

“My brain is so overclocked, I’m someone who gets bored easily. I never held a job for more than two and a half years,” he says. “By then I knew more than my bosses did so there was really no point.”

“The ability to switch gears [between projects] so quickly is, I think, something you’re born with,” he adds. “My brain moves very fast—probably as part of my dyslexia. These days, I often read two (or three!) books at the same time.”

Lustbader notes authors such as John Le Carre, Emily St. John Mandel, Carlos Fuentes, Roberto Bolaño, Colin Wilson and W.B. Yeats have inspired and influenced his writing over the years. At present, he is reading Yeats “as part of the research for the novel I’m currently writing,” but admits he’s struggling a bit to find focus. “Right now is one of those times I’m having a difficult time finding something good to read. However, I will say the very best book I’ve read in years is Adam Johnson’s The Orphan Master’s Son.”

When uninspired by other people’s words, Lustbader turns to music for his muse. “I like to listen to music while I write, but the music depends on the scenes I’m working on: psychological/dialog or action, etc. I spent a decade in the rock music business, so I’m on top of all the new releases. In fact, I often tweet about the ones I like best,” he says. “Other than that, there is no process. Everyone has to write in the way that makes them comfortable.”

Lustbader keeps himself similarly busy when he is not writing. He has a love of Reiki and music, as well as tending to his collection of Japanese maples and beech trees. But he also acknowledges that he probably doesn’t do enough to relax day-to-day.

“Being in the pool helps tremendously— being immersed in water is very soothing,” he says. “But to really relax and rejuvenate I need to travel, preferably out of the country. Those are the only times I really feel as if I can breathe deeply and let every anxiety and care fall away.”

Well, that and perhaps an overindulgence in sweets. Lustbader cops to being a chocoholic, listing good chocolate alongside travel as a couple of his favorite things—in addition to being able to write for a living, of course. It’s not a gift he takes for granted, which is sage advice he dishes out to aspiring scribes.

“There are no universal tips,” he says. “Either you can write it or you can’t. Some writers start by diagramming, sketching out story and character arcs. If you don’t know what these are, look them up. Others don’t want any of that to get in the way of their writing. It’s up to you to decide what’s the best path for you. Whichever way you go, remember you can always get better. Always.” 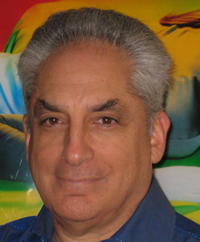 Eric Van Lustbader’s first novel, The Sunset Warrior, was published in 1975. Since then, he has published more than twenty five best-selling novels, including The Ninja, in which he introduced Nicholas Linnear, one of modern fiction’s most beloved and enduring heroes, continuing his exploits in five subsequent best-sellers. His novels have been translated into over twenty languages; his books are bestsellers worldwide and are so popular whole sections of bookstores from Bangkok to Dublin are devoted to them.

Mr. Lustbader was born and raised in Greenwich Village, where he developed an interest in art as well as in writing. He lived downstairs from the young Lauren Bacall and built orange-crate racers in Washington Square Park with Keith and David Carradine. He is a graduate of Columbia College, with a degree in Sociology, but his real education came much earlier at The City & Country School where, as Mr. Lustbader, is fond of saying, “I learned all the important lessons that would stay with me for life.”

Before turning to writing full time, he enjoyed highly successful careers in the New York City public school system where he holds licenses in both elementary and early childhood education, and in the music business where he worked for Elektra Records and CBS Records among other companies. He was the first writer in the US to write about Elton John and to predict his success. As a consequence, he, Elton and Elton’s lyricist Bernie Taupin became friends. Writing for Cash Box Magazine, he also predicted the successes of such bands as Santana, Roxy Music, the Jimi Hendrix Experience, David Bowie, and The Who, among others.