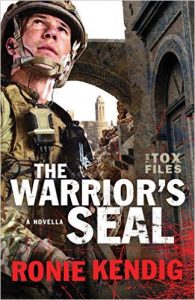 The prequel novella (and free!) to Conspiracy of Silence, Tox Files #1.

Cole “Tox” Russell and his team are tasked in a search-and-rescue—the U.S. president has been kidnapped during a goodwill tour. The mission nosedives when an ancient biblical artifact and a deadly toxin wipe out villages. Tox must stop the terrorists and the toxin to save the president–and his team–before it’s too late!

THE WARRIOR’S SEAL is available from Amazon.

Ronie Kendig is an award-winning, bestselling author of a dozen novels. She grew up an Army brat. Now, she and her husband, an Army veteran, have an adventurous life in Northern Virginia with their children and two dogs–a Maltese Menace and a retired military working dog, VVolt N629. Ronie’s degree in Psychology has helped her pen novels of intense, raw characters.