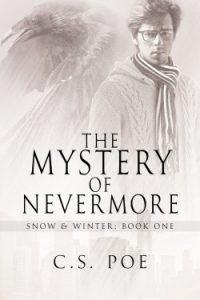 It’s Christmas, and all antique dealer Sebastian Snow wants is for his business to make money and to save his floundering relationship with closeted CSU detective, Neil Millett. When Snow’s Antique Emporium is broken into and a heart is found under the floorboards, Sebastian can’t let the mystery rest.

He soon finds himself caught up in murder investigations that echo the macabre stories of Edgar Allan Poe. To make matters worse, Sebastian’s sleuthing is causing his relationship with Neil to crumble, while at the same time he’s falling hard for the lead detective on the case, Calvin Winter. Sebastian and Calvin must work together to unravel the mystery behind the killings, despite the mounting danger and sexual tension, before Sebastian becomes the next victim.

In the end, Sebastian only wants to get out of this mess alive and live happily ever after with Calvin.

THE MYSTERY OF NEVERMORE is available from DSP Publications.

C.S. Poe is an author of gay mystery and romance. She believes that happily ever after is an attainable goal for any character, given enough elbow grease and legwork is provided.

C.S. lives in New York City, but has called a host of different locations home in the past, most recently Ibaraki, Japan. She regrets no longer having easy access to limited-edition candy, capsule toy machines, and clean trains, but over ten years in New York has proved to her there is no place quite like it.

She has an affinity for all things cute and colorful. C.S. is an avid fan of coffee, reading, and cats, in no particular order. She’s rescued three cats, including one found in a drain pipe in Japan who flew back to the States with her. Zak, Milo, and Kasper do their best on a daily basis to sidetrack her from work.

C.S. Poe can be followed on her website, which also has links to her Goodreads and social media pages. She can also be followed via her e-mail newsletter on the website.