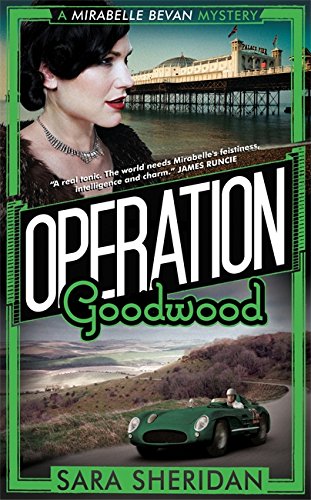 Sara Sheridan’s mysteries have been published in the U.K., and they are now heading to America.  In OPERATION GOODWOOD, a glamorous racing driving is found hanged in a burning flat on Brighton’s seafront. His neighbor, Mirabelle Bevan, finds herself conflicted by the apparent inconsistencies in the stories surrounding the driver’s death. His father is barely grieving, his friends appear to have fallen out with each other, and no apparent reason can be found for the golden boy’s suicide. Mirabelle follows the trail to Goodwood’s famous racetrack, where she uncovers a web of deceit, shameful secrets, and an unraveling family mystery that the people involved will go to any lengths to cover up.

How did the idea of OPERATION GOODWOOD originate?

It’s the fifth entry in the Mirabelle Bevan Mysteries series, so my antenna is honed for ideas that chime with 1950s England.  When I visited the Goodwood Estate a couple of years ago and saw their collection of vintage photographs from the 1950s—especially those from the car racing track—I knew Mirabelle had to visit. It was just so glamorous—all the fast cards and aristocratic misadventures. Perfect!

What can you tell us about Mirabelle Bevan in her latest mystery?

Before I started writing the series I had never had returning characters before. I’ve got to know Mirabelle pretty well by now. She started, in 1951, at the age of 37 (which was considered well past the prime for women during that era). She was heartbroken and grieving and had had a tough war, from which she (like many women of the era) hadn’t really recovered. The series, in a way, is the story of Mirabelle cheering up. So by OPERATION GOODWOOD she has a nescient (if stormy) relationship with Detective Superintendent Alan McGregor and has gained a lot of self-confidence. In short, she’s blooming.

What has drawn you to the fifties?

It was a period we didn’t cover when I was in school—so when I started, my knowledge of the decade was drawn from Grease and some Agatha Christie. I love the 1950s now. I’m fascinated by it.  It’s the decade my parents met (at Edinburgh at a tennis party), as well as the time my father did his national service and my grandparents’ heyday. It’s the era that founded my family, I suppose. That’s what fascinates me most about history—you can’t go forward, I think, without understanding where you came from.

I am a nerd. I love archives—I use old books, letters, journals, photographs, and newsreels. I chat to old ladies (anywhere—bus stops and shop queues included). I try on 1950s clothes. I peer at period detail in old movies. It’s become a passion.

Have you ever caught yourself mentioning a nonexistent technology or a building that wasn´t around?

London was bombed extensively during WWII and a quarter of a million people were made homeless, so it’s a minefield when Mirabelle goes up to town—so much of the city was under construction. I try really hard to get it right. It does stretch the modern imagination a lot—especially understanding how little communication was possible. We all carry the world on our phones now, but in 1955 you’d be scouring to find a phone box.

You write in different categories.  Is it difficult to juggle them?

I love it. I think it keeps me fresh. As well as the Mirabelle Bevan books, I also write a set of books about early British Empire explorers and adventurers. So I spend six months of the year on each. That sounds very organized.  It doesn’t always work and I end up writing one and editing another at the same time. But I probably won’t get Alzheimer’s—let’s put it like that. It’s Soduku plus.

You seem very proud of everything Scottish.  What is it that drives your pride in your heritage?

I was born and live in Edinburgh, Scotland’s capital. I travel a lot, but that’s where I live and it’s where I come from. There are so many things I love about Scotland—not the weather, granted—but the people, the creative community, the depth of our history and culture. Last year. I founded a company called Urban Reivers.  We sell gifts but have a No Tartan Purses policy.  All our stuff is a celebration of real Scottish history. At the moment we’re developing a perfume called Damn Rebel Bitches based on the Jacobite Women. It’s the smell of the Real Outlander.

I’m writing an historical epic set in Antarctica between 1842 and 1913. It feels odd because I’m writing in summertime, and I keep having to describe blizzards and ice storms. Even in Scotland the summer isn’t that bad!

Your books are now launching in America. Anything you´d like to share with the audience from this side of Atlantic?

Well, I don’t know. Gosh. I suppose I’d like to say how excited I am about the books coming to America. You guys are just starting on the series—the first was out with Kensington earlier this year in hardback. They changed all the spelling! Keep an eye out—the TV rights to the series have been taken and next week I’ll be in London having a meeting with the producers. Let’s see how that goes. 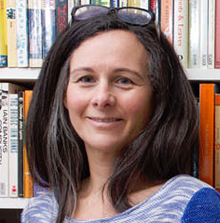 Sara Sheridan is an Edinburgh-based historical novelist who writes two different kinds of books. One is a series of cosy crime noir murder mysteries set in Brighton in the 1950s – Brighton Belle, London Calling, England Expects, British Bulldog and Operation Goodwood – and the other is a set of novels based on the real-life stories of late Georgian and early Victorian explorers and adventurers (1820 – 1845) – The Secret Mandarin, Secret of the Sands and On Starlit Seas. She has also written for children – her picture book I’m Me has appeared on CBeebies three times. She is a member of the Society of Authors, the Historical Writers Association, the Historical Novel Association, the Crime Writers Association, Scottish PEN and BAFTA.

To learn more about Sara, please visit her website.