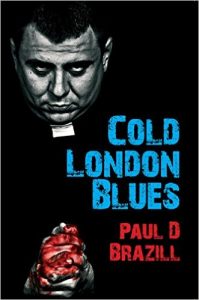 A killer priest is on the rampage across London and an egotistical Hollywood action movie star is out for revenge when is his precious comic book collection is stolen. Meanwhile, gangster Marty Cook’s dreams of going legit swiftly turn pear shaped when one of his bouncers accidentally kills one of his salsa club’s regular customers. Razor sharp wisecracks, gaudy characters and even gaudier situations abound in Cold London Blues, a violent and pitch-black Brit Grit comedy of errors.

“If you took Ken Bruen’s candor, the best of Elmore Leonard’s dialogues, sprinkled in some Irvine Welsh, and dragged it all through the dirtiest ditch in South London, the result will be something akin to Brazill’s writing.” – Gabino Iglesias (author of Zero Saints and Gutmouth)

COLD LONDON BLUES is available from Amazon and Amazon UK.

“A broad range of cultural strands come together in the melting pot and form a delicious stew of criminal adventure… The observations are sharp and the characters create small nuclear explosions as they collide with each other.” – Nigel Bird (author of Southsiders)

‘Brazill isn’t just a writer; he’s a poet and you can take any of his stories and write a master’s thesis on just the language employed.’- Les Edgerton (Bomb!, The Bitch)

Paul D. Brazill is the author of Guns Of Brixton, Cold London Blues, The Last Laugh and Kill Me Quick! He was born in England and lives in Poland. He is an International Thriller Writers Inc. member whose writing has been translated into Italian, German and Slovene. He has had writing published in various magazines and anthologies, including The Mammoth Books of Best British Crime. He has edited a few anthologies, including the best-selling True Brit Grit – with Luca Veste. His blog is at pauldbrazill.com.

A Touch of Morning Calm by Wayne Zurl