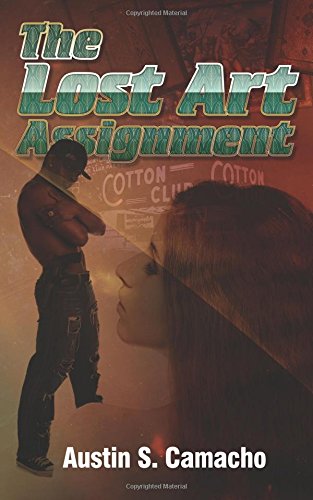 There’s always something appealing about a reformed crook. Many of the greatest heroes started off their careers in the wrong side of the law: Wyatt Earp, the Dirty Dozen, Remington Steele, even Severus Snape and Megamind. Among this celebrity group we can count Felicity O’Brien and Morgan Stark, an unusual pair composed of a thief and a mercenary—and quite the pair they make. Note that I don’t use the word couple because their relationship is strictly platonic, with a touch of the paranormal. However, one thing is certain; they were meant to be together.

The Big Thrill had the opportunity to interview Austin Camacho about his new book, THE LOST ART ASSIGNMENT.

Say you meet me at a bookstore, how would you sell me your book?

It’s old-school action and adventure with some of the most interesting characters you’ll meet in a novel. An Irish ex-patriot jewel thief and a hardened mercenary soldier combine their talents to take on an ingenious gangsta who has the brains and the balls to take over New York city’s organized crime.

Some scenes of the book occur in places that no longer exist.  Were research for them a challenge?

Actually, the research was great fun. Once I decided that our new-age gangsta had a thing for Harlem’s heyday, I dug into the era of my father’s youth. There’s a surprisingly rich bank of literature about the Harlem Renaissance, the Apollo Theater, and so forth. What an interesting place and time.

There are plenty of discussions about art and artists.  Are you an art connoisseur or aficionado?

Not in the least, but since one of my main protagonists is, I had to learn a thing or two. Luckily I live close to Washington, D.C., so not only do I have access to great museums, but also to the people who work there who just love to answer art-related questions.

Morgan takes a quite a few heavy steps across the line of criminal activities in the name of the assignment.  Is there a limit of what he will do for a customer?

Morgan is a soldier at heart with his own personal morality. Like his partner, he views the law as a collection of guidelines rather than rules. However, he does have clear limits. He’ll do all he can to protect innocents and to avoid harming American law enforcement or military personnel. And he chooses his clients carefully to avoid being asked to do anything he’d consider immoral.

The psychic connection between Felicity and Morgan is quite interesting and unique.  They seem unavoidably joined at the hip, which begs the question, did you create them one at a time or did they materialize as a couple?

These characters arose from a concept that just exploded into my mind, so I’d have to say they came into focus simultaneously. I wanted to write a thriller series that would be equal parts of the types of thrillers I love to read: military action tales and caper stories. But those seemed incompatible story types. With that thought, the big idea hit: what if we had characters who were total opposites, yet inextricably linked? Then they grew, side by side, in my head. Not just the obvious (soldier and thief) but black and white, male and female, American and foreign, high class and earthy. And of course the psychic link bonds them in a way no other two people are linked.

What can you tell us about JJ Slash and his Convincers?

I believe great villains make great heroes, and I wanted bad guys on the level of Bond villains (from the books, not the pale imitations in the movies). JJ Slash is my idea of the master villain in the twenty-first century.  A strategic genius thinking on the Blofeld level, or at least the Goldfinger level, but rooted in today’s gang environment. He wants to transcend that environment and pull the New York gangs together into a single more efficient machine, like Luciano, Lansky, and Seigel when they formed Murder, Inc.

Naturally he has to have a posse on the level of Oddjob. I started with the basic thug archetypes—muscle man, fast gun, martial artist—and amped them up to give our heroes a run for their money.

Do you have a book trailer?

Not yet, but stay tuned.

This is never a problem for me because I don’t have to “make” myself write. The truth is, I can’t not write. I generally throw down a few words early in the morning and more during my lunch hour. But for me, nothing beats camping out on the deck in the summer with my laptop, some cool jazz, and a milkshake (vanilla ice cream, Irish Crème, and a blender are all you need for the perfect shake).  So summer is when my best writing takes place. 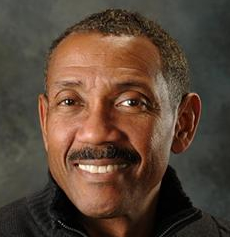 Austin S. Camacho is the author of five novels in the Hannibal Jones Mystery Series (including The Troubleshooter, Blood and Bone, Collateral Damage, Damaged Goods and Russian Roulette) and four in the Stark and O’Brien adventure series (The Payback Assignment, The Orion Assignment, The Piranha Assignment, and The Ice Woman Assignment), and the detective novel Beyond Blue.

He is a past president of the Maryland Writers Association, past Vice President of the Virginia Writers Club, and is an active member of Mystery Writers of America, International Thriller Writers, and Sisters in Crime. Austin Camacho and his family have settled in Upper Marlboro, Maryland, with Princess the Wonder Cat and their dog, The Mighty Mocha.